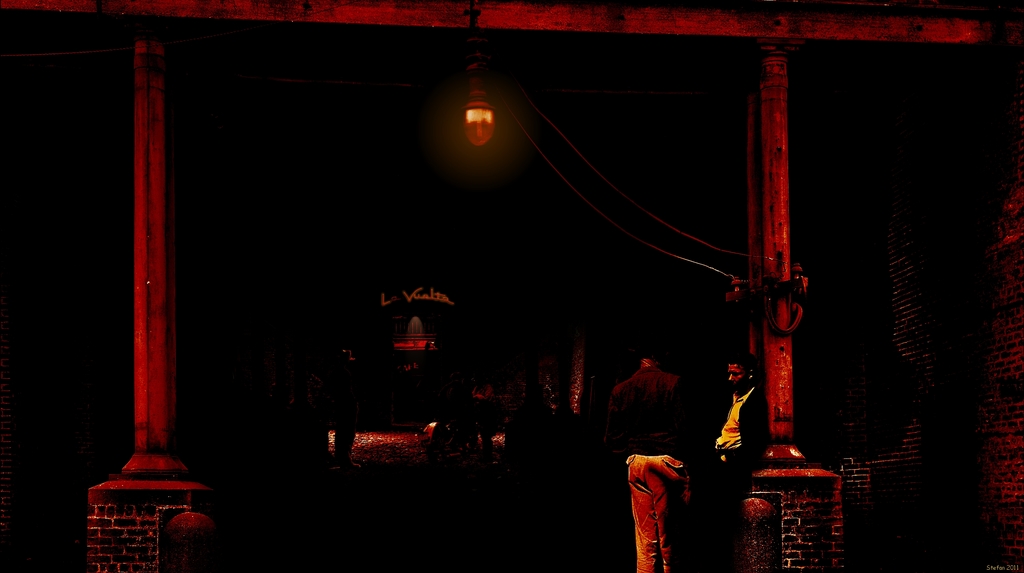 Then, on one very special night, at the Stonewall...

The background information is great. It's a shame that the Stonewall Riots aren't widely celebrated. I'm very active in the social justice organizations in my area and we all, LGBT and straight, certainly celebrated it together.

Thank you so much for posting this.

There is, indeed, a bunch of - somehow complementary - different things in this picture. Here we go. The Stonewall, as you are most certainly forgivable not to know, was a gay bar in Greenwich Village NYC where, in the early morning hours of June, 28 1959, for the first time in history, gay men spontaneously reacted and violently fought back a police raid. The day (night) and event are somehow remembered as the starting point, the dawn of the out-of-the-closet "Gay Modern Era". More about the Stonewall riots, its developments and consequences can be found at :

Prior to that, gay life, if such a thing existed, was, indeed, very shady, dangerous and clandestine. That is the mood the picture tries to convey, with this scene set in some 40's, pre-Stonewall moment in time. This is also what the title of the picture reflects : Mala Vida, bad life, low life in Spanish, refering to both some Spanish speaking slum and the notorious gay fantasy for Latinos.

The sign in the background advertising the shabby dive is in Spanish as well : La Vuelta. It refers, as for it, both to the above mentionned hispanic element of the scenery and to a scene from the fantastic film by David Lynch Mulholland Drive, one of my absolute favorite films, where another dive called Club Silencio, also dealing a lot with Spanish language and also having a heavy meaning in the plot, is located deep down in the dark background of some desert, dangerous looking alley. Anyone remembers ?

Ultimately, the name, La Vuelta ( the return, the half-turn) refers to both the vintage, nostalgic, diesel era-related element and the gay proclivity for... OK, you got the idea.

And you thought all this was there just by chance... !

Comment by Tome Wilson on January 5, 2011 at 8:58am
Stefan - What is the story in this piece?  I can't quite make out the sign in the background, but the whole scene looks shady to me.