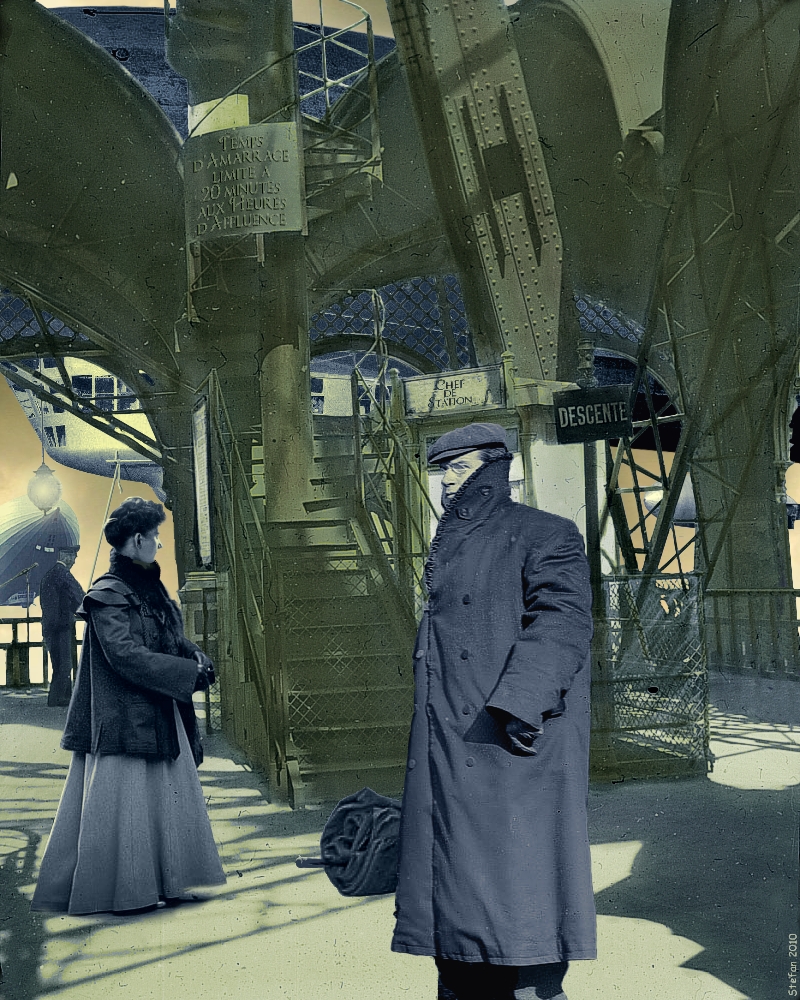 This is a little surprise-gift for Athena, an illustration for the excerpt of her book she treated us to as a teaser in the Literature section of the Great Diesekpunk Exhibition. But... not a word, please : she doesn't know !

"Paris in springtime should have been romantic, or at the very least, fashionable. But for Maxie Malone, even a new coat in the latest Spring fashion lost its glamour when it hid blood-stains.
Beside her, Ulfric Von Kluge, late of the German Empire and more recently seeking asylum through as temporary crew aboard the USS Valkyrie, clutched his portmanteau tighter and Maxie had never seen anybody look so lost and hangdog all at the same time. Around them, smatterings of conversation in French, English, and Spanish drifted about like the bits of newspaper escaped from the trash bins in the downdrafts of the airships queueing up for moorage behind the USS Valkyrie, and the Tour Eiffel cast a long and lacy shadow over the plaza far below.
.../...
Above them, moored to the needle of the Tower, the Valkyrie bobbed gently in the crosswinds. Her ladder had unfurled and the mooring officer had finished securing it to the fixed ladder up to the tiny crow's nest."
by Athena Prime.
More at :
http://www.dieselpunks.org/forum/topics/athenaprime-hall-of-travel

Comment by Athenaprime on June 9, 2010 at 11:18pm
Oh...my...Stefan! I'm so humbled. This is a great, huge, massive complement! It's beautiful, and the play of light and shadow through the girders is one of the things I most remember about my own visit to the tower (although the top was closed that day). And there's Maxie's coat, and Ulfric's portmanteau. This makes me want to go back over that scene and add so many more little visual cues to give justification for this beautiful work.

Thank you, thank you so much!
<3 Athena