Its big brothers, Mark I-VI tanks, are far more famous - and deadly slow. Of course, they were initially thought of as weapons of breakthrough only, but some experts started talking about using tanks for exploitation as well, working together with the cavalry*. This, however, required a faster tank. The result was the MK A "Whippet" - or, as it was initially known, after it's designer, Sir William Tritton of William Foster & Co. Ltd. of Lincoln: "The Tritton Chaser". Work started in October 1916, and the first prototype was ready in March 1917. 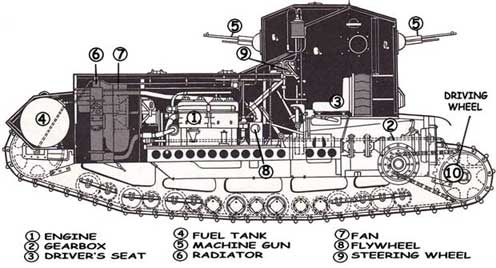 It's main points of design were long and low set tracks, each driven by it's own 45-hp engine. The steering was done according to a very novel metod. The driver sat behind a standard steering wheel, the turning of which directly affected the throttles of the two engines, thus increasing or decreasing the speed of the tracks, thus making turning a simple and straight-forward affair. (The gear boxes and transmission were independent for each track, but could be locked together when the tank was to run straight ahead.) In theory that is. In reality it was a system very difficult to master. For example, if the turn was too tight, one engine easily stalled, which brought the whole tank to an abrupt halt. First it was thought to equip the tank with a turret (of a type reminding of that used on the Austin Armoured Car) but simply to facilitate production it was instead given a fixed crew compartment, housing 3 or 4 men, manning 3-4 Hotchkiss MGs. 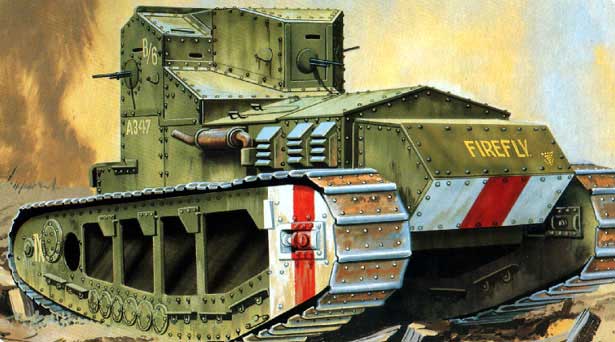 An order for 200 vehicles was placed, and production started in December 1917.

Whippets were first used in action near Herbetune in northern France in March 1918, but the tanks really came to the fore in August the same year when some 90 of them were used during the Battle for Amiens. (The action in August showed that the idea of "Cavalry Tanks" were as dead as the Cavalry themselves: in good conditions the horses were faster than the tanks, but whenever they met any serious opposition they had to wait for the "Whippets" to move up in support. And in heavy going the tanks left off.) 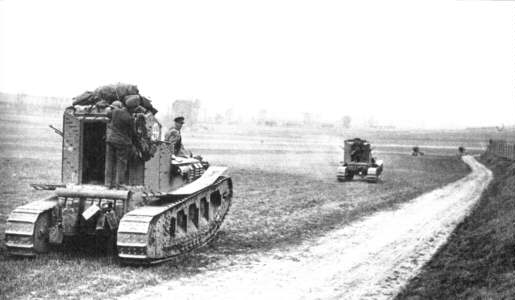 The Whippet had poor trench-crossing capability, but with it's 13-14 km/h the Whippet WAS faster than the other tanks, and when used in the role it was originally intended for, it could make quite an impression. One such Whippet, "Musical Box", belonging to B Coy, 6th Battalion, commanded by lieutenant CB Arnold, took part in the big attack on August 8, 1918, overtook the slow Mk V:s, routed a German Artillery Battery and on it's own penetrated to the rear of the German lines. Quoting Mitchell: "From this on the loneley Whippet, with it's bold crew of only three men, carried on a war of it's own. It shot down retiring infantry, attacked horse and motor transport, and regularly terrorized the bewildered Boche." This went on for eleven hours, and then the tank was first immobilized, surrounded and then destroyed by fire from field artillery. Arnold and one of his crew survived, and were taken prisoners. 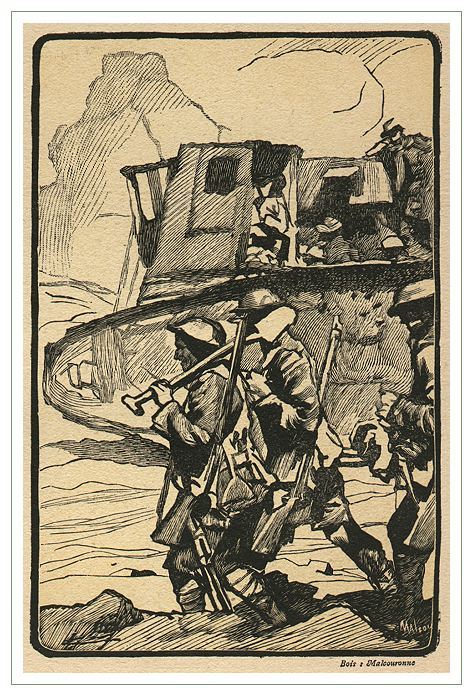 Major Philip Johnson, the unofficial head of Central Tank Corps Workshops in France, as soon as he received them began fitting one of the Whippets with leaf springs. Later, in 1918, he fitted this vehicle with sprung track rollers, Wilson's epicyclical transmission from the Mark V and a 360 hp V12 Rolls-Royce Eagle aero-engine. A top speed of about 30 mph (48 km/h) was reached. This project made Johnson the best qualified man to develop the later fast Medium Mark D, which looks like a reversed Medium A. Other experiments included the fitting of a large trailing wheel taken from an old Mark I tank and attaching a climbing tail, in both cases attempts to increase trench-crossing ability.

For a time it was assumed that after the war some Whippets were rebuilt as armoured recovery vehicles, but this was not the case. The Medium Mark B, a completely different design by Wilson, also had the name "Whippet". For a time it was common to describe any of the lighter tank designs as a Whippet, even the French Renault FT. It had become a generic name.

The Whippet was also used in the Russian Civil War, first by the Whites, an later, when captured, by the Red Army. An unknown number of Whippets were after the war purchased by the Japanese, who used them until 1929. During WW1 the German Army also captured a number of Whippets, but they were never used in combat by them. (Their opinion of it was pretty high, however: some believed it was the only Allied tank that was worth copying right off.) It can be mentioned, that at least one captured Whippet was used by Freikorps forces during the unrest in Germany after the war.

Whippets are preserved at the he Tank Museum, Bovington, Dorset (UK): and at the Royal Museum of the Army, Brussels: 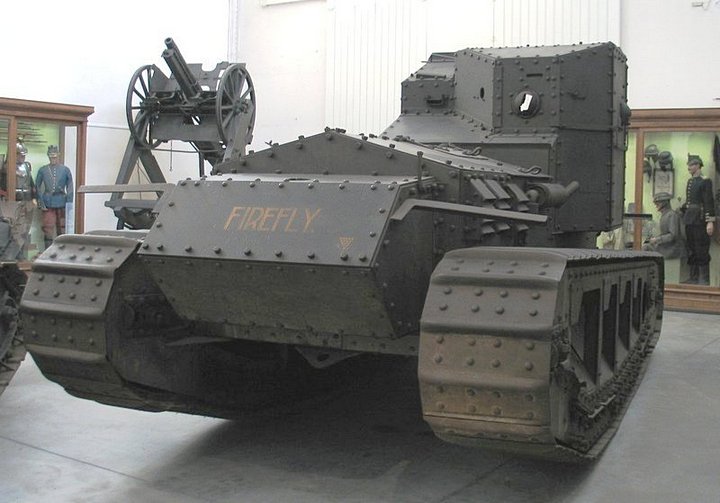 There is even a Whippet monument, part of the Memorial to the Men of the Tank Corps (Pozieres on the Somme): Memorial to the Men of the Tank Corps, Pozieres on the Somme