A few weeks ago, we threw our gaze upon The Horror In Clay, a Cthulhu Cult-inspired tiki from Jonathan "Atari" Chaffin. Since then, it's been blowing other Kickstart projects out of the water. Whether the world has suddenly succumbed to tiki-madness or the Cult supports their own, I'll never know. However, I was able to catch up with Atari to dig up some of the secrets behind this infamous mug.

Was this your first shot at the Tiki style?

Not sure what to say about the rest of my artwork; I am a commercial graphic designer by training, with a lot of experience in identity work, print publication, and merchandise. I love period design (any period really) and try and put realistic details regarding type selection and graphic stylization into my personal work. Oh, and interrobangs. I love interrobangs. And fezzes. Fezzes are cool.

I've done some tiki style work, including a month for a tiki calendar, and I collect a lot of artwork by poly-pop and lowbrow artists (Derek Yaniger, Coop, Ed Roth, and Shag are some favorites but there are many many more). Most of my other designs for mugs and such like are hanging out in my sketchbooks and on napkins. 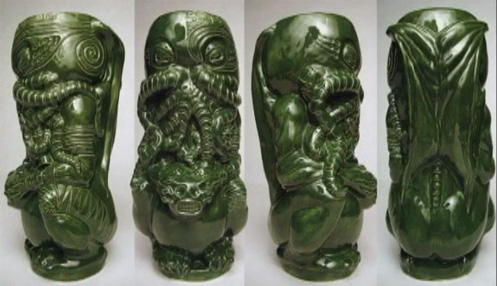 The backstory for these pieces was unexpected. Usually the artwork speaks for itself, but there's a whole history and world surrounding The Horror In Clay. What inspired that?

For this project I was interested in creating a backstory through time for this mug; this artifact. It is common for a tiki bar to have a signature statue or design that carries through all of their identity and promotional material. I asked myself - if this is the mug for Pickman's Cove, what does the logo for the bar look like? What is the mug based on (in this case, a fictitious totem). Where did the totem originate. Where is Pickman's Cove located, and how did the idol get there? Where did the proprietor of the bar see or acquire the idol?

As I answered those questions I got a list of times and places I wanted to place the carving the mug is based on, and did some research on those things to use in my design work; I tried to keep the ephemera that comes with the mug accurate in terms of typeface choice and design stylization. It's not going to be 100% accurate, but I tried to evoke the feel of, say, an early 1900s museum catalogue page, or of a 1953 matchbook where appropriate.

After I conceived this project I kept thinking of what an idol carved by pacific islanders would look like. Over time I became convinced that it wouldn't reflect the influence of just one tribe or native group, because it wouldn't likely be a single culture that gave over to worship Cthulhu... more likely it would be the dreamers, the visionaries, and the viciously insane. Following that thread, it made sense that those people would be killed or driven out; if they survived they would seek out other nascent cultists like themselves, and what you would end up with would be a tribe of madmen and women co-mingling art traditions. 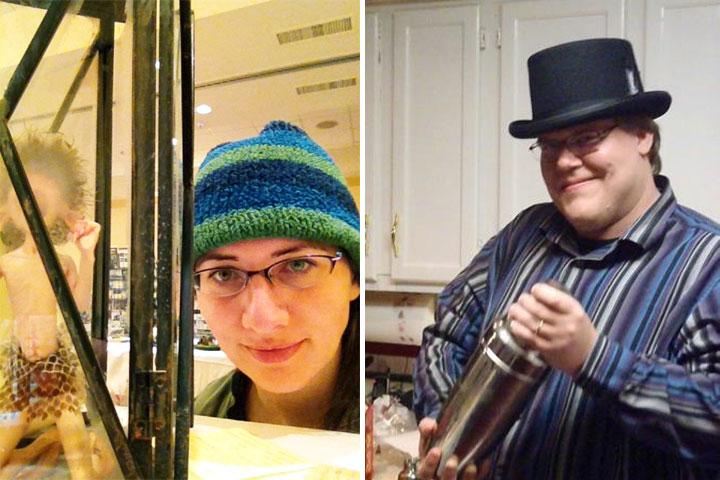 What part did Kristina play in the design?

I'm a graphic designer, not a sculptor, and my own attempts at bringing this idea to 3D life were not satisfactory, so I had a bunch of graphic doodles incorporating maori, cook islander, hawaiian, and other stylizations and surface decorations. Around June of last year I met Paul Francis at a meetup at Trader Vics Atlanta. Around then I became aware of the beautiful work Kristina was doing for some tiki bowls inspired by the Mai Kai; one of the greatest traditional tiki restaurants in the country. (If you like immersive restaurant experiences, you owe it to yourself to go). The more I thought about it, the more it seemed Kristina had the talent and the skills to really make this project live.

Kristina is a very talented naturalist, so we skewed the design more towards its current incarnation, using tattoo and scarification style designs instead of the full polynesian gamut. The Horror In Clay went through a couple of design iterations, but the prototypes you see on the kickstarter page are the first fully realized designs - we nailed it down pretty well before it saw life as a sculpture.

Any plans for continuing the story?

As I recall Kristina was excited about the idea of doing another tiki mug (she has done a few others) and thought a Cthulhu tiki mug would be really cool. She's been a pleasure to work with.

The success of this kickstarter campaign so far has blown my mind - I've been suffering san loss for every day it runs, but it's wonderful. My favorite piece has been hearing from other tiki and horror fans around the worlds (including some of your wonderful readers).

Tune in to www.horrorinclay.com to see what comes next!