First, a small "editorial": I want to underline my attitude towards the projects I present to the honourable public. So, few moments:

1) Most of these projects come from inexperienced people, without necessary design and construction skills, driven by enthusiasm.

2) The basis for this fruitful process is common for most countries of the period, and that is the rapid increase of educated people and their strong belief in the powers of state-of-the-art science and engineering.

To underline the second point, I have a good example. Probably, some of you have heard about the enormous land unit (or formation) of the Red Army established in 1940 - The Mechanized Corps (or The MechCorps, which sound even more impressive), which comprised ~1 100 tanks, ~37 000 personnel, armoured vehicles, artillery etc. The challenge of  this unit operations was obvious, so a special study was carried out. One of the conclusions was that it will require a huge fleet of cargo trucks, but the most important (to illustrate my point) was the solution proposed: "To develop and produce new type of trucks that could carry two times more cargo". I believe most people here understand the capabiliities of the 30s-40s mass-produced trucks and how impossible this target was. But- the belief in power of technology at its purest.

Okay, let's get down to business, number one for today:

Well, this one is unbelievable. It was proposed by engineer-captain, who served as a lecturer in Bryansk military-political academy.

The idea was to build a huge roller (using the powers of Metrostroy, the state subway constructors), that will run by means of tractors rolling on the inside ribbed surface of the roller. Separte chambers for landing parties, tanks, artillery etc. could be made. Also there were ideas to create sea-faring and flying variants of the roller dubbed "Venkoval". And, one more point - the author initially proposed dual-purpose principles, so the rollers may be used during war as well as for peaceful means. Overall, there were more than ten possible variants, including submarine and ice-breaker. 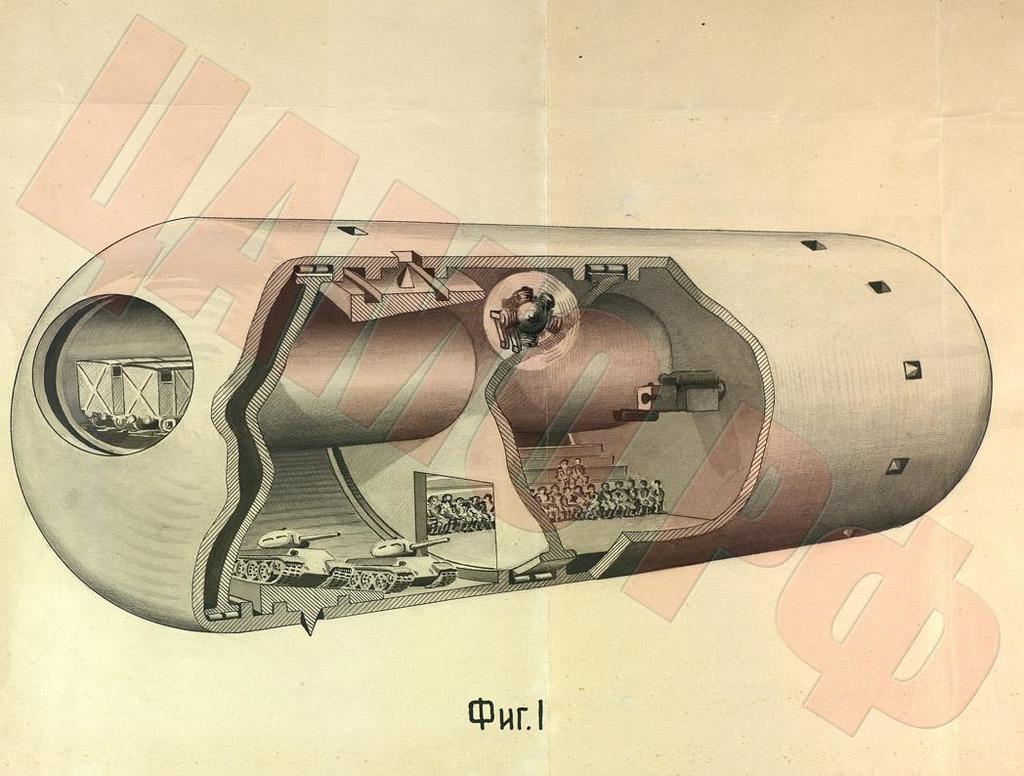 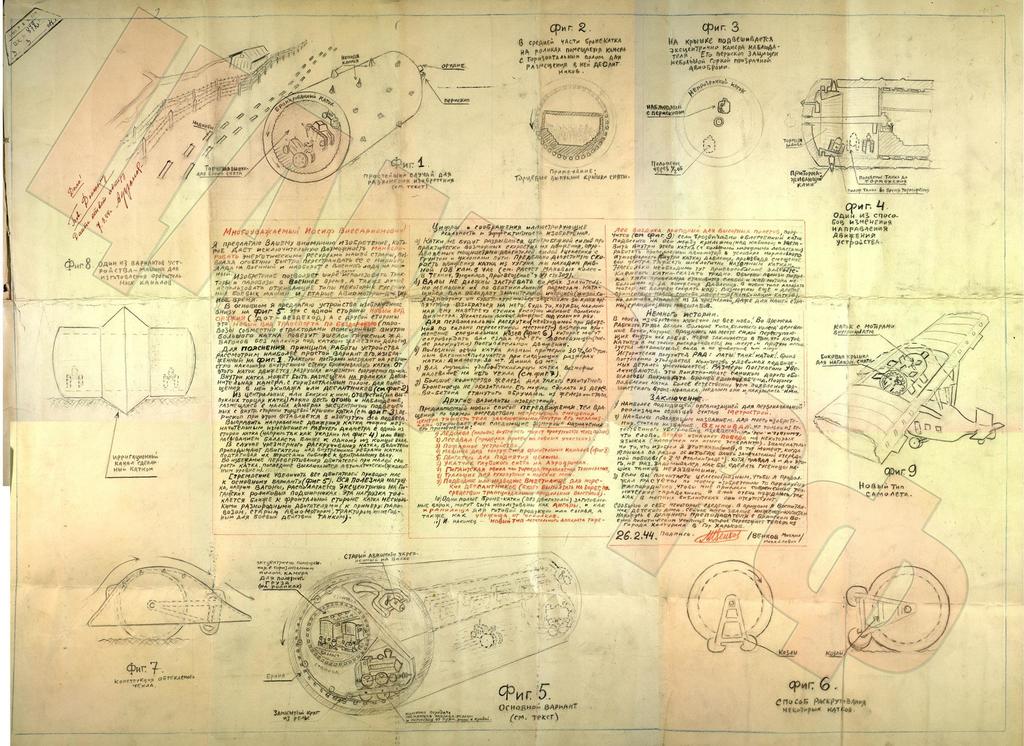 This one is a real marvel. Rather detailed description of a light armoured jumping vehicle.

Basic idea: a steel armoured sphere on six legs, driven by an engine inside the sphere.

The motion occures by 5-to-20-meter jumps, made by two legs, while 4 other legs "tighten", and the turret turns onto direction of the jump,

The Karar is operated by one person sitting inside the turret on a rotating chair, driver and gunner simultaneously. The height of the vehicle is up to 3 meters, turret diameter - up to 1,5 meters. Legs shaped in a form of a six-wing star (no conspiracy theories please!) have a total diameter of 3.5 meters. All elements were to be made from lighweight alloys, and the engine wasn't supposed to consume more fuel than the motorcycle.

Main tactical advantages are mobility and surprise-effect. Another important point - it was seen as a total opposite to the tanks, the development of which was accompanied by growing mass.

There was even an organization chart proposed: 6 Karars - squad; 24 Karars - platoon (with tank attached as a mobile command post, by the way, all Karars were to be equipped with radio), 72 Karars - brigade, with 10 attached tanks. Karars were to be carried by trucks, 2 in each. 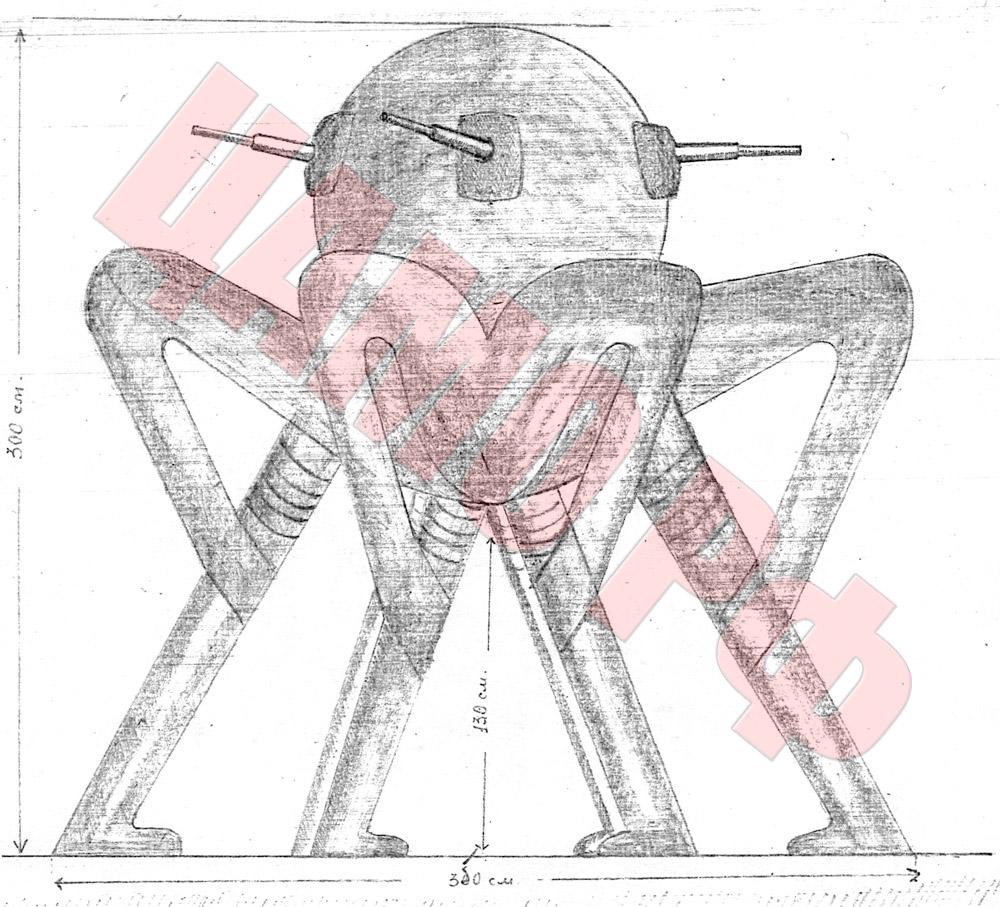 And a coloured one with turret and enigne sections: 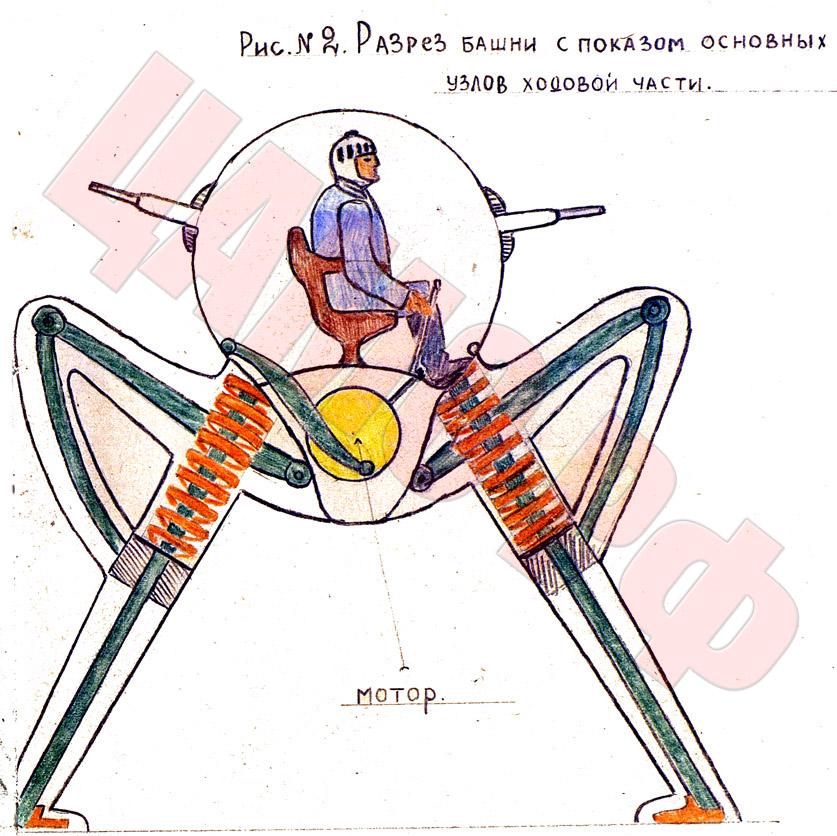 Now I will go through some works by another prolific engineer, who proposed 10 different projects after serving in armoured forces in 1940.

Our designer was very concerned about railway security during war, so he proposed a vehicle that could effectively fight against all possible offensive measures.

The "hull" was to be assembled from "drum-type" armoured parts, weld with each other, and "front" and "end" sides were ti be cast steel spherical-cones. Hull-25mm armour, turrets - 30mm. Turrets are to be operated with electric motors. AA machinguns must be capable of fire against ground-targets.

The "armoured unit" was to be powered by diesel engine (950 hp) paired with 500 volts DC-generator in the middle part.

The hull rests on two biaxial carriages, that comprise 2 electromotors (130 kW). The vehicle was to be equipped with electrical and pneumatic brakes.

Overall, it was supposed to match railroad measures and regulations. Very nice design, as to my senses. If it existed "in metal", it would well suit "Sunday Streamline" section.

We are not finished yet -

By the same author, with same streamlined design - a mobile battery of 3 45mm anti-tank cannons (and one armor-penetrating machine-gun!).

All three ATs are placed in a frontal 25mm shield, in separate masks with a possibility to concentrate fire on separate parts of one target. The engine, steering etc. were to be based on conventional truck-parts (GAZ-AA etc.). "Cockpit" was to have round 10mm armour, other parts - 5-6mm.

Crew - 5 men, 3 for AT operation, 1 driver and 1 machinegunner-battery commander. 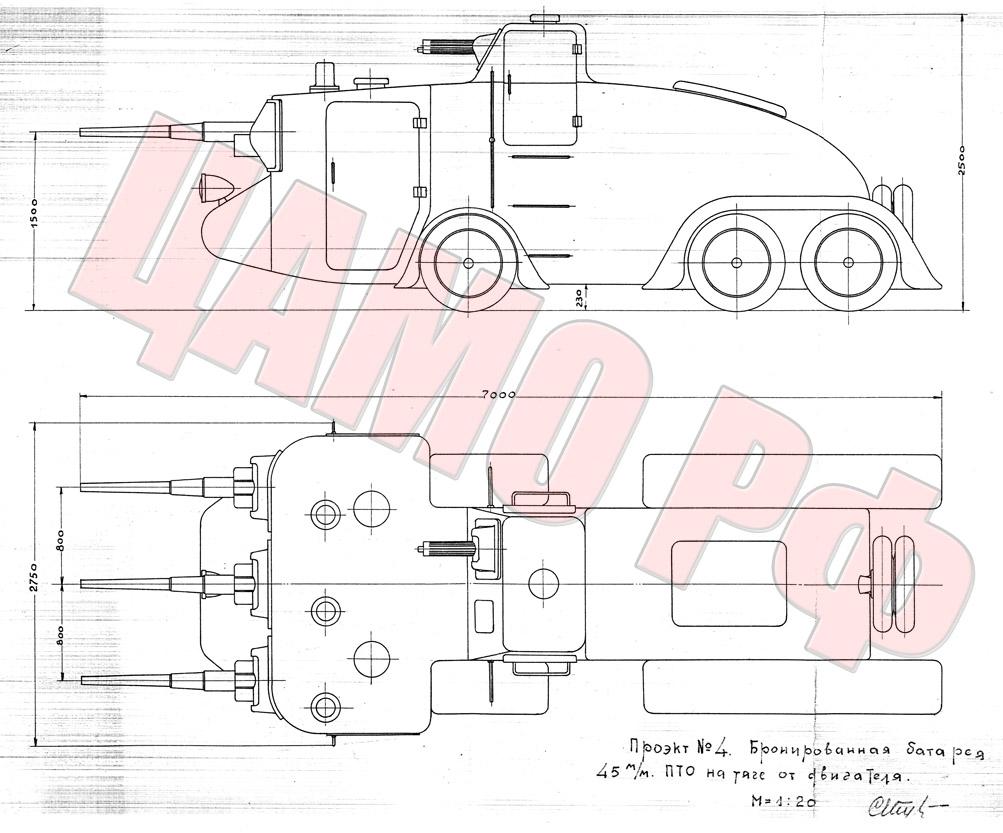 And last one for today will not be accompanied by much text...

Wood-cutter/tank-dumper, and this literally explains everything:) In fact, it is hard to force myself to try to understand how this was to be operated, and even harder to think about possible pictures of its operations, so just enjoy the pictures of different mechanisms. 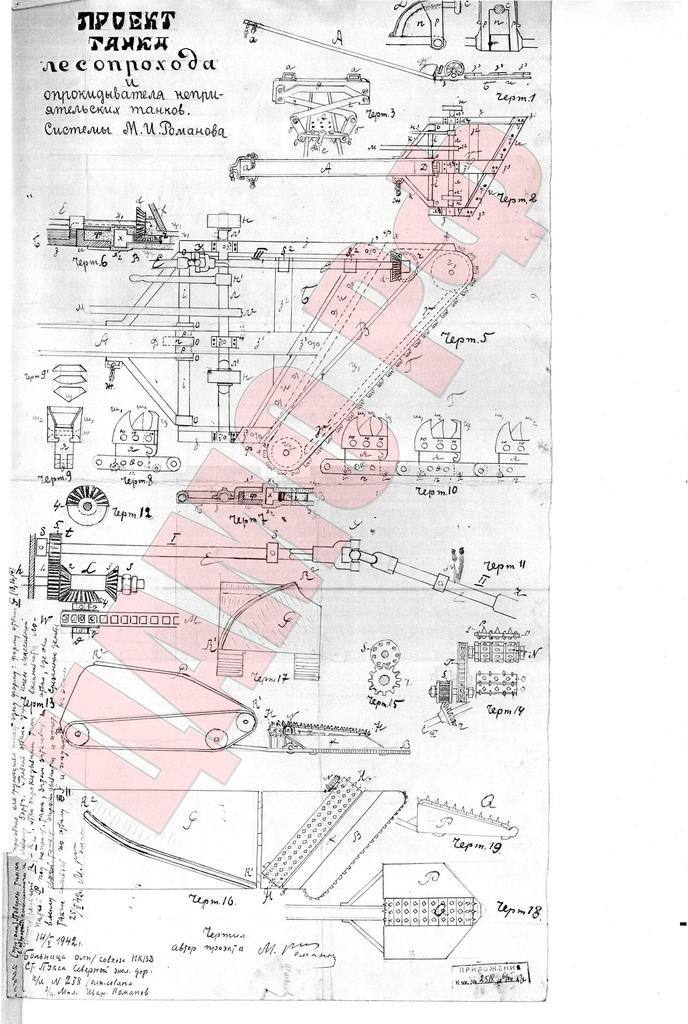 Well, Cap'n, I am not pure "technology bearer", but as a graduate of Moscow Engineering Physics Institute I understand the feeling:) Personally do my best to improve the image of scientists and engineers among co-workers etc. Propaganda-good-fight, heh.

Articles will be up and running, luckily there are still enough great stuff. Now I'm thinking about a "special" issue, are just a bonus project for the next article (one month passed!) or the semi-jubilee fifth one.

Alas as one of those "Technology Bearers" today, I find that reverence has been replaced by a general sense of disdain to fear and loathing.  At best you're a "useful nerd" or "necessary evil".  At worst you're a mad menace running amok with world-raping filthy machines...even when you're developing energy efficient and renewable power alternatives.  While I don't think we need to return to science-worship, I'd love to simply be ranked with medical professionals and teachers as good, productive important members of sociecty.

Cap'n Tony, and there are more of them coming our way!

Elvisrocks59, you are most welcome. And a lot is yet to be uncovered. I want to add that belief in technology was also accompanied by "belief" in "technology-bearers", sometimes almost religious. Most of these projects' descriptions contain a statement, like "with assistance of professional design and constrction teams it would be easy to gain success with this proposal".

The Roller is out of this world.

Another outstanding insight into the mind set of which the war (and peacetime) era brings us. As you say "the belief in power of technology at its purest" i feel is at its best when our backs are up against the wall.

Just when I thought they couldn't get wackier!