This five-turreted 45-ton beast was the heaviest tank of the interwar period. 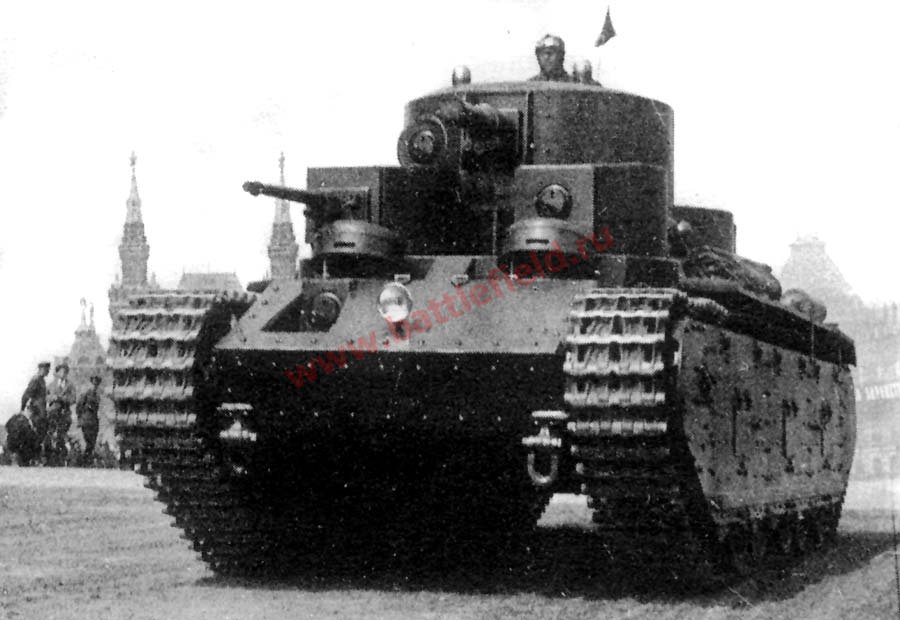 The T-35 was developed by the OKMO design bureau since 1930. Two teams developed separate designs. One (headed by the German engineer Grotte) worked on the 100-ton four-turreted TG-5 tank, armed with a 107 mm naval gun, using pneumatic servo-controls and pneumatic suspension. This project was later canceled.
The concept of large, multi-turreted breakthrough tanks was favored by several European Armies in the 1920s and 1930s. Designs existed in Britain, France, and Germany for such vehicles. The second OKMO team, headed by N. Tsiets, worked on a tank inspired by the British Vickers A1E1 Independent.
By July 1932, a prototype of a 35 ton tank with a 76.2 mm tank gun was completed. The first prototype was further enhanced with 4 smaller turrets, two with 37 mm guns and two with machine guns. This first prototype had severe defects in its transmission and was considered too complex and expensive for mass production. Therefore work on it was stopped and a new simpler prototype was built.
This new prototype received a new engine, new gearbox and improved transmission. The decision was also made to standardize the turrets used on the T-35 with those used on the T-28, a triple-turreted medium tank.
On August 11, 1933, the T-35 was accepted for production. Engineering was shifted to the Kharkov Locomotive Factory, and two batches of ten vehicles were completed.
The experiences gained with the two prototypes were used for the main production T-35 Model 1935, which was again improved from the second prototype, with a longer chassis, improved hull and 45-mm guns in place of the 37's. It started production in 1935, and about 35 were built by 1938. In general, throughout its production run small improvements were made to the individual tanks. Some examples had flamethrowers instead of one of the 45 mm guns. The final batch was a run of six T-35 model 1938s, which had new turrets with sloped armor all around, as well as modified side skirts and new idler wheels.
Due to its high cost, the production run of the T-35 ended at just sixty-one tanks.
Info: Wiki
And now... Enjoy the pictures:

Comment by Tome Wilson on October 8, 2009 at 12:24pm
I always forget that these things were used in the era of trench warfare. Thanks for the clarification!

Comment by lord_k on October 7, 2009 at 1:59pm
They were not designed as tank-fighters. Tanks do not fight tanks, you know. Flamethrower AFVs, like Churchill Crocodile and numerous Sherman conversions, were created for fighting enemy infantry in trenches and densely built areas.

Comment by Tome Wilson on October 7, 2009 at 1:45pm
Tanks with flamethrowers seem a bit superfluous, don't they?

Against other armor, was it more effective than standard ammunition?