Has it ever occurred to you that home refrigeration became common (at least in the States) during our beloved Diesel Era?

The absorption refrigerator was invented by Baltzar von Platen and Carl Munters from Sweden in 1922, while they were still students at the Royal Institute of Technology in Stockholm. It became a worldwide success and was commercialized by Electrolux. Other pioneers included Charles Tellier, David Boyle, and Raoul Pictet. Carl von Linde was the first to patent and make a practical and compact refrigerator.

These home units usually required the installation of the mechanical parts, motor and compressor, in the basement or an adjacent room while the cold box was located in the kitchen. There was a 1922 model that consisted of a wooden cold box, water-cooled compressor, an ice cube tray and a 9-cubic-foot (0.25 m3) compartment, and cost $714. (A 1922 Model-T Ford cost about $450.) In 1923 Frigidaire introduced the first self-contained unit. About this same time porcelain-covered metal cabinets began to appear. Ice cube trays were introduced more and more during the 1920s; up to this time freezing was not an auxiliary function of the modern refrigerator. The first refrigerator to see widespread use was the General Electric "Monitor-Top" refrigerator introduced in 1927, so-called because of its resemblance to the gun turret on the ironclad warship USS Monitor of the 1860s. The compressor assembly, which emitted a great deal of heat, was placed above the cabinet, and surrounded with a decorative ring. Over a million units were produced. As the refrigerating medium, these refrigerators used either sulfur dioxide, which is corrosive to the eyes and may cause loss of vision, painful skin burns and lesions, or methyl formate, which is highly flammable, harmful to the eyes, and toxic if inhaled or ingested. The introduction of Freon in the 1920s expanded the refrigerator market during the 1930s and provided a safer, low-toxicity alternative to previously used refrigerants. Separate freezers became common during the 1940s, the popular term at the time for the unit was a "deep freeze". Frozen foods, previously a luxury item, began to be commonplace.

Now let's take a look at refrigerator ads brought to us by Paul Malon through his ever-surprising Flickr photostream. (the bear is advertising beer but who cares?) and a multi-purpose device: 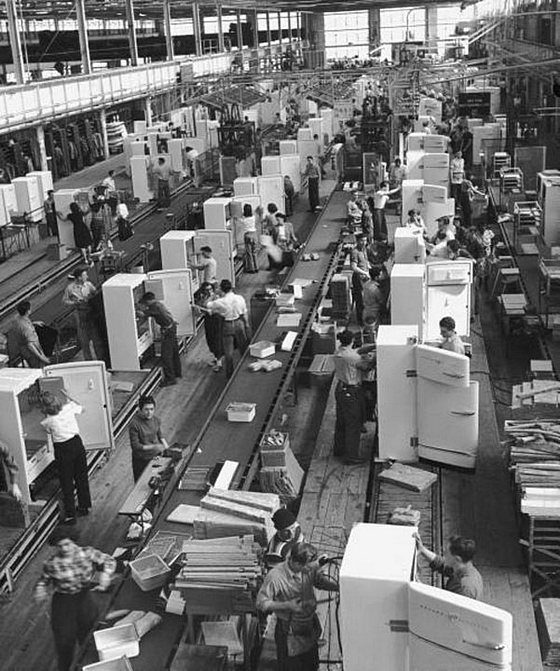 The picture above is taken from a great, highly recommended article "A Visit to a 1930s Appliance Show" published @ Jitterbuzz

Comment by Pilsner Panther on March 8, 2011 at 3:27am
Gets me in both my Coldspot and my Hotpoint.

Comment by Larry on March 7, 2011 at 8:28pm
My mother used to tell me about how, how as a little girl, the ice delivery man would bring the blocks of ice to be used in the fridge. She never lost the habit of calling the fridge the "ice box," which is a habit I still have.