A monitor was a class of relatively small warship which was neither fast nor strongly armoured but carried disproportionately large guns. 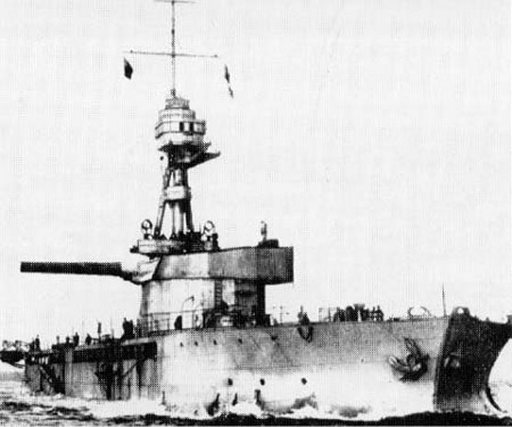 During World War I, the Royal Navy developed several classes of ships which were designed to give close support to troops ashore. Termed 'monitors', they owed little to the monitors of the 19th century, though they shared the characteristics of poor seaworthiness, shallow draft and heavy armament in turrets. The first class, the Humber class (HMS Mersey, one of the three, shown above), armed with two 6-inch (152 mm) guns in one twin turret, had been laid down as large river gunboats for the Brazilian navy.

Later monitor classes were equally makeshift; they were often designed around whichever spare guns were available from ships scrapped or never built, with the hulls quickly designed and built in 'cheap and cheerful' fashion. They were broad beamed for stability (beam was about 1/3 of the overall length) which together with a lack of emphasis on speed made them extremely slow, and they were not suitable for naval combat or any sort of work on the high seas. 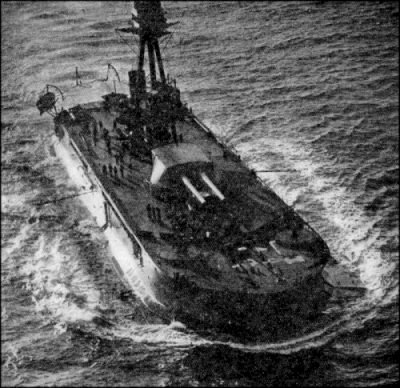 The most important question was the availability of guns. In 1914 eight new 14-inch guns were sitting in America, stranded when the British blockade stopped them from reaching Germany where they were to be installed on the battle cruiser Salamis, intended for Greece. They were offered to Britain — at a highly inflated price — and installed in the first four monitors built. As a compliment Churchill ordered them named after Americans, the Admiral Farragut, General Grant, Robert E. Lee and Stonewall Jackson. 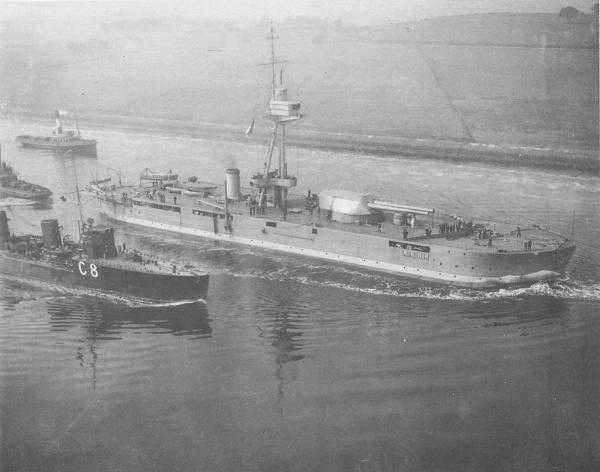 He was always impulsive, apart from having an American mother, and in this case had misread a situation in which Washington was immersed in a state of anxious isolationism. Fearful that these names would draw attention to the transfer of the guns, the diplomats insisted that they be changed. The vessels became HMS Abercrombie, Havelock, Raglan (shown above) and Roberts (shown below), establishing a system of naming most monitors after British (and French) generals. 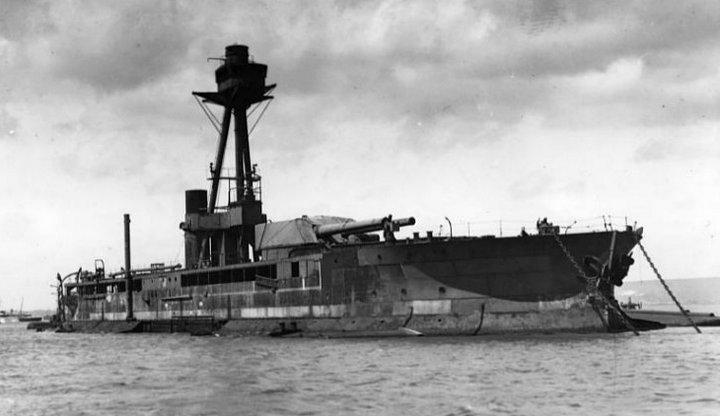 As the war settled to its longer course, these heavier monitors formed patrols along with destroyers on either side of the Straits of Dover to exclude enemy surface vessels from the English Channel and keep the enemy in port.

By the time the two Marshal Ney class ships came about some 33 monitors of various sorts had already been ordered. The redesign of two battlecruisers, HMS Renown and Repulse meant that there were now two modern 15-inch turrets available. The First Sea Lord Jackie Fisher and Winston Churchill, First Lord of the Admiralty decided these should be used for two more monitors, initially M 13 and M 14, but then renamed after the French Napoleonic War marshals Nicolas Jean de Dieu Soult and Michel Ney (see headline picture for the Marshal Ney, Marshal Soult is below).

For machinery the two monitors received diesel engines, which were then a novelty - the majority of ships being steam powered. The use of diesels meant that they had no need of boiler rooms which went well with a low draught nor large funnels which reduced the amount of superstructure. These engines were originally designed for much smaller freighters and therefore they proved particularly slow and unreliable. After Marshal Ney trials the turret was removed for HMS Erebus and she was regunned with 6- and 4-inch (102 mm) guns and acted as a guardship until the end of the war. She later acted as a depot ship gaining onshore buildings, and was renamed Alaunia II and was only finally scrapped in 1957. Marshal Soult in contrast was the most effective bombardment ship in the navy until late 1917, even thought she too could only achieve a little less than seven knots. Her range of 32,200 yards allowed her to fire with relative safety. 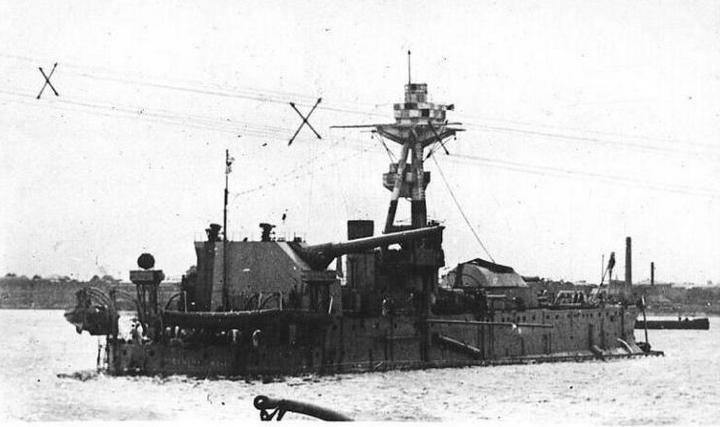 the Admiralty ordered eight more monitors, virtually identical to those equipped with the American 14-inch guns, but instead carrying British 12-inch 35-calibre weapons. They were taken from four of the Majestic-class pre-dreadnoughts, Hannibal, Mars, Magnificent and Victorious, and like their predecessors were given the names of generals. Six of the names were predictable, being Sir John Moore, Lord Clive, General Crauford, Earl of Peterborough, Sir Thomas Picton and General Wolfe (shown above), the other two named Prince Eugene and Prince Rupert.

Despite these new ships it was evident that they could soon be outmatched by new German installations, as indeed they were when the Deutschland coastal battery with four 15-inch guns was completed in April 1917. By then Admiral Bacon of the Dover Patrol had persuaded the Admiralty to mount a single 18-inch gun on some of his monitors. Obviously this could not be a turret, even though that of Furious from which they came had minimal armour, but it was possible to place them in a semi-fixed "box" on the stern of Lord Clive and General Wolfe, firing to one side only. The elevation was boosted from the 30 degrees in the battle cruiser mount to an impressive 40 degrees allowing for a range of 40,500 yards. Players that wish to use such a monstrosity — with two 12-inch and one 18-inch in 6,000 tons perhaps the most over-gunned ships ever built — when playing a Great War at Sea scenario should beware. Although the biggest gun was deadly when firing the right ammunition — it could penetrate 18-inches of the best armour at 15,000 yards — there are two problems. First, like all monitors a large proportion of the ammunition was high-explosive. Second the gun could only traverse up to 10-degrees! 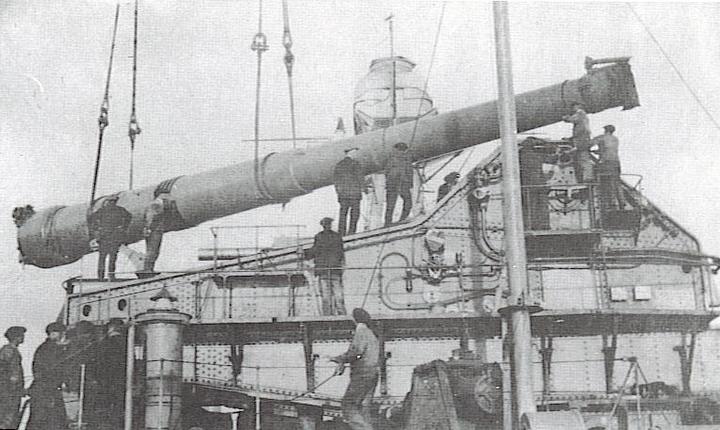 Lord Clive received her 18-inch gun short before the Armistice, in September 1918.

Two Glatton class monitors are very different from other monitor classes, being coastal defense battleships ordered by Norway in 1913. At the outbreak of World War I in August 1914, both ships (named Bjørgvin and Nidaros) were under construction at Armstrong Whitworth, Elswick. However, when World War I broke out, the Royal Navy requisitioned most warships under construction in Britain for foreign powers and refunded the two thirds of the £370,000 purchase price for each ship already paid by the Norwegians. Their completion was greatly delayed by the changes made by the British, which included modifying the boilers to use both oil and coal and conversion of twelve double-bottom tanks to carry the oil. Armed with two 9.2-inch (230 mm) Mk XII guns in single turrets, they were commissioned only in 1918. 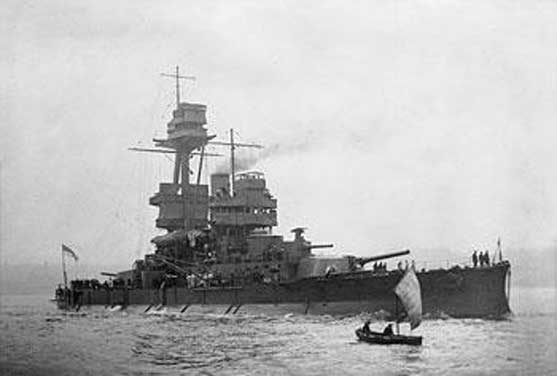 HMS Glatton (ex-Bjørgvin, shown above) was wrecked by explosion on September 16, 1918, after two and a half months' service. The Court of Inquiry found found in April 1919 that "the slow combustion of the cork lagging of the 6-inch midship magazine of the Glatton led to the ignition of the magazine and then to the ignition of the cordite in it and so caused the explosion." Her sistership Gorgon (shown below) shelled the Belgian coast and was decommissioned in 1919. The monitors could also operate into the river mouths. The General Wolfe, one of the Lord Clive class monitors, which had a single 18-inch (457 mm) gun added in 1918, was able to shell a bridge 20 miles (30 km) away near Ostend. Other RN monitors served in the Mediterranean.

NEXT WEEK: MONITORS IN WWII