In the future that never was, trans-ocean communications and sea warfare belonged (or should I say "will belong") to giant flying boats. Here are two examples of these mighty machines, both built by Potez-CAMS, France. In 1933, Potez acquired CAMS (Chantiers Aero-Maritimes de la Seine), a company famous for its flying boats, most notably the versatile Model 37: The first flying boat designed after the merger was less successful. Only 16 Potez 452 reconnaissance aircraft (below) were built, and the next model, the 453, never entered serial production. The Potez-CAMS 141 (see the headline picture) was designed to meet a French Admiralty specification issued on May 10, 1935, and calling for a Long-range Maritime Reconnaissance Flying Boat to supplant the Breguet Bizerte and other types approaching obsolescence. Detailed design and construction was begun by the CAMS during the second half of 1936, and the prototype, which had been built at Sartrouville and shipped to Caudebec-en-Caux for assembly, flew for the first time on January 21, 1938.

After some twenty hours of flying, the bow side keels were raised to improve hydrodynamic performance at maximum loads, and in August 1938, the Potez-CAMS 141 was flown to St. Raphaël for official trials. After thirty-three hours flight testing at Saint Raphaël, the 930 hp Hispano-Suiza 12Y-26/27 liquid-cooled V-engines using 87 octane fuel were replaced by 970 hp Hispano-Suiza 12Y-36/37 engines using 100 octane fuel, but almost immediately the original engines were re-installed. The Potez-CAMS 141 was, like the other flying boats built to the same specification, intended to mount a 0.98 (25 mm) cannon in the dorsal turret, although this weapon was never installed. In the spring of 1939, the prototype was christened Antarès by the French Navy, and a production order was placed for four machines, this being augmented by an additional order for a further fifteen machines shortly before the beginning of WW II.

Production of the hulls began at Le Havre, the wings being built at Meaulte. Shortly after hostilities began, unlimited production of the Potez-CAMS 141 was ordered, a delivery rate of two machines per month being scheduled to commence in June 1940.

However, on April 27, 1940, as a result of the low loss-rate of long-range flying boats, the French Admiralty requested that production be limited to 31 machines and, in the following month, reduced this to eleven machines. The original prototype Antarès had been delivered to a new unit, Escadrille E8, forming its only flying equipment, and on November 20, 1939, it was decided to install two 0.295 in (7.5 mm) Dame machine guns (similar to that used by French motor torpedo boats) in each of the power-operated dorsal turret, the lateral barbettes, and the waist positions. An additional 3,307 lb (1,500 kg) bomb load could be carried. The aircraft was finally scrapped late in 1943 by which time it had logged 1,800 flying hours. No production Potez-CAMS 141 flying boats were completed.

The six-engine Potez-CAMS 161, designed by a team led by Maurice Hurel, was intended to meet an official French specification which called for a large transatlantic flying boat capable of carrying 40 passengers over a distance of 6,000 km at an average speed of 300 km/h against a 60 km/h headwind. Some freedom of design was given the competing manufacturers, but minimum and maximum weight limits of 30 and 70 tonnes were imposed. Three projects were selected for construction, the Potez-CAMS 161, the Liore-et-Olivier H-49 (later redesignated SE 200), and the Latécoère 631. The Potez-CAMS 161 was officially ordered in 1937, but prior to the commencement of prototype construction a 1:2.6 scale flying model was built to prove the aerodynamic and hydrodynamic features of the design.

The hull, wing and tail assembly of the Potez-CAMS 161 had been completed at Sartrouville at the beginning of WW II, the components subsequently being transferred to Le Havre where assembly was resumed in April 1940.

Work stopped in June 1940, but in March 1941 the decision was taken to resume assembly of the flying boat and the components were returned to Sartrouville where the Potez-CAMS 161 was finally completed, being launched on the Berre Lake with the registration F-BAOV.

However, by the time flight trials were initiated on 20 March 1942 the prototype sported Luftwaffe insignia and the call sign letters VE+WW. After the completion of initial flight trials, the Potez-CAMS 161 was ferried to Lake Constance where, in company with the Laté 631.01 and SE 200.01, it was eventually sunk in an Allied bombing attack.

Although full trials were never completed, estimated performance was as follows:

Quite possibly the most bombastic behemouth was the ANT-22. It was even proposed carrying it's own submarine. 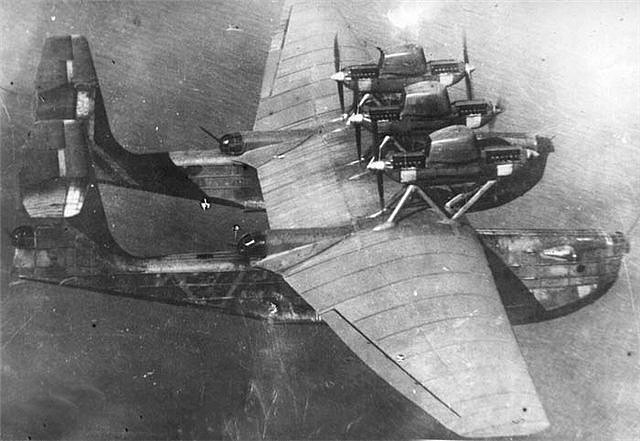 In MY future flying boats still rule the air and waves!