This is the last chapter of the Early Lockheed's Saga.

The Lockheed Model 9 Orion was the last of Lockheed's single engine transports, seated six passengers and was powered by a 420hp P&W Wasp engine. The Orion cruised at 180-195 mph and is claimed to be the first transport capable of 200 mph. The Orion was also the first commercial aircraft with an efficient retractable undercarriage. Orions first went into service in May, 1931 with Bowen Airlines.

One of the most classic designs in the aeronautical field came into being in 1931 with the advent of the Lockheed Model 9 series -  the "Orion". These aircraft were the last in the remarkable series of "wooden wonders". The success of the earlier high wing Lockheed "Vega" line, which made its debut in 1927, brought about a succession of Lockheed and Detroit-Lockheed aircraft based on that outstanding design.

The "Vega" was an advanced concept by Allan Lockheed and John Northrop. Its basic design led to numerous innovations and concepts for almost seven years of production, including the parasol monoplane "Air Express", the first low wing experimental "Explorer" and the "Sirius" models. Then came the "Altair" before the Orion came onto the scene. With each new type came impressive records in safety, speed and handling qualities.

John Northrop remained as chief engineer with Lockheed for only a short time, and Northrop left Lockheed in 1928 because of his intense interest in the flying wing theory and all-metal construction of aircraft. Further development of the "wooden wonders" fell into the capable hands of Gerald Vultee, who then became chief engineer.

Vultee, however, was also not to remain with Lockheed for long. In 1930 he was transferred to Detroit operations to oversee the metal fuselage "Vegas" then under construction. This was at the time when the Detroit firm gained controlling interest in the Lockheed Aircraft Company. Vultee remained with Detroit-Lockheed briefly and then left to form his own company.

Richard Von Hake became chief engineer and he was responsible for the final development of the "Orion". This low wing monoplane was designed to meet the growing needs of the airlines where the "Vegas" had already proven their popularity. The low wing version offered even greater speed, comfort and profitable operation. 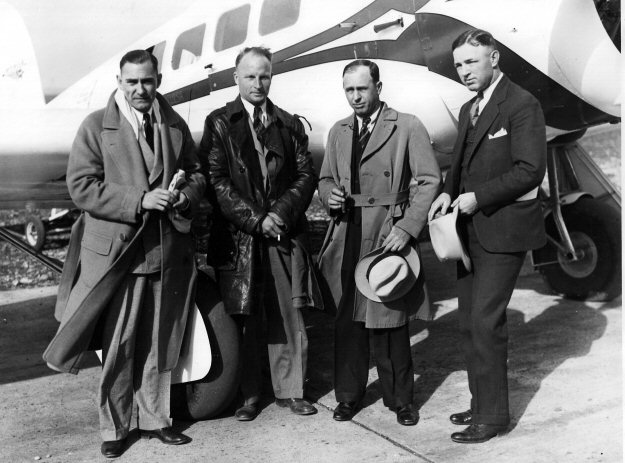 The first "Orion", c/n 168, X960Y (NC960Y, see the photo above) was completed in March 1931 and made its maiden flight the following month with chief test pilot Marshall Headle at the controls. Little trouble was encountered during the trials and speeds up to 225 mph were recorded. Like its predecessors, the "Orions" were made from the same basic mold and jigs. Construction was all wood, including plywood skin and a final, fine linen covering.

Advanced features included a full N.A.C.A. aluminum engine cowl over the 450 hp Pratt and Whitney "Wasp" engine. A fully retractable main landing gear was incorporated, the first designed and used on a commercial aircraft. This gear system was first worked out on a company "Sirius", demonstrated in September 1930 and incorporated in the first of the "Altair" line. A hand crank method of retraction was initially employed, but by the time of the "Orion" production, a hydraulic hand pump system had been developed. Six passengers could be carried in the fuselage although, admittedly, in rather confined quarters.

The "Orions" were produced during extremely trying times and strenuous financial conditions. The economic situation and uncertainties of the early 1930s did not lend itself to an unbroken or predetermined production line. As a result, the series was produced in slightly varying configurations and performance specifications. 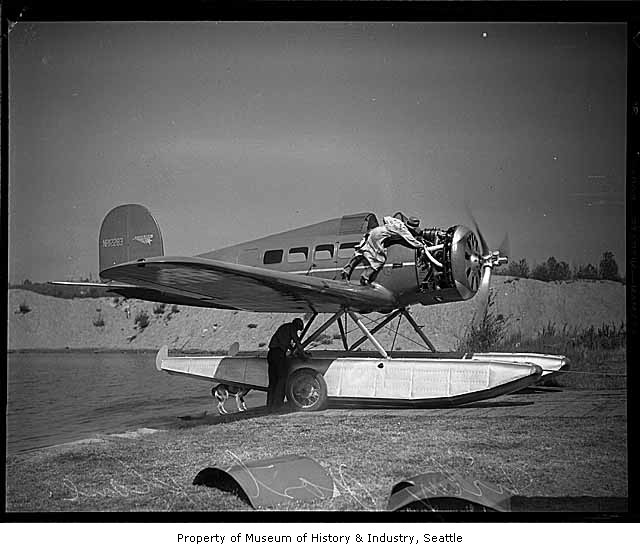 All Model 9 "Orions" had the same 42' 9 ½" wing span except for the special "Orion Explorer" of Wiley Post (see the picture above and click on it!) which used a 48" 6" "Explorer" wing and was also modified in other ways. Overall lengths varied from 27' 1" to 28' 11", according to engine and propeller installation and various other alterations made to suit specific customers.

In the spring of 1929 Detroit Aircraft Corporation, a holding company of Detroit, Michigan, successfully maneuvered themselves into gaining controlling interest in the original Lockheed Aircraft Company. This concern had plans of entering the aeronautical field by applying the same mass production and standardized policies as used in the automotive field. Several months later the stock market crashed and by the end of 1931 Detroit Aircraft went into bankruptcy, and dragged the Lockheed subsidiary under, too.

The future looked bleak indeed, when the "Orion" was introduced in April 1931. When the Detroit organization went into liquidation, the jigs, machinery and structural steel used in making the original metal fuselage "Vegas" were shipped to the Burbank facilities. On October 27, 1931 the Title Insurance and Trust Company of Los Angeles became receivers for the Lockheed assets. Throughout 1931, 17 "Orions" were produced before manufacturing ceased and the doors were closed. The first two "Orions" were sold to Bowen Air Lines, Inc. of Fort Worth, Texas. There followed similar small but important orders from other airlines and one was produced for private use. It was Walter T. Varney; however, who became the earliest and greatest proponent of the "Orion". During the big "shake-up" within the airline industry in 1930, Walter Varney resigned as president of the Varney Air Lines when it was acquired by United Air Lines that year. Their policies of using only specified equipment did not fit his idea of running an airline. He started a new service called Varney Air Services, Ltd., with two operating companies, Varney Speed Lanes and Air Ferries, Ltd.

Varney's approach to the airline business was to be free of consolidated business contingencies and acquire the best, most comfortable, safest and speediest equipment available. He turned to Lockheed ordering six "Orions" at a cost of almost $150,000, taking delivery between September and October 1931. As soon as they became available they were put into service between San Francisco and Los Angeles. Billed as the "Fastest Airline in the World" it carried passengers between the two major California cities on a schedule of 65 minutes, for an average of 254 mph. To attain speed, designers equipped the Orion with the first successful retractable landing gear developed for commercial aircraft. Varney's Speed Lanes gained wide and immediate recognition. By March 1932 the lane included Hollywood, Oakland and the state capital of Sacramento. Not only was Varney making history but the use of "Orions" as of inestimable promotional value. The order from Varney was also of great help in keeping the Lockheed plant open a while longer. Lockheed Orion 9A Special, NC 12229 "The Spirit of Fun" leaving Mascot airport on its flight around the world, with Arthur M. Loew and James Rosthal on board, and Jimmy Dickson as pilot, 1932. Via Batman_60, on Flickr One of the twoSwissair Orions Many safe miles flown in airline service and headlines won by a few made, at the hands of expert speed pilots, proved the advanced design and reliability of the "Orion". Those that went into airline use as a passenger transport had their life span limited, however. In 1934 the Civil Aeronautics Authority issued a ruling prohibiting further use of single engine passenger aircraft from operating on all major networks. It also became mandatory to have a co-pilot and thus a two-seat cockpit arrangement on all such flights. Paul Mantz's Lockheed Orion 9-C at the old San Francisco Bay Airdrome in Alameda in 1939. By Bill Larkins, on Flickr The requirements of the ruling brought an end to the "Orion" as a passenger carrying airlines' airplane, but a number of leading lines converted their "Orions" to cargo or mail carrying machines exclusively. Others disposed of them and looked to new aircraft.

Just amazing having all those great aviation names (Lockheed, Northrop, Vultee) all ion the same project!