This week's trip to the cinema is Tod Browning's 1932 horror classic, Freaks, on request by James from Pennsylvania.  The genesis of MGM's Freaks was a magazine piece by Ted Robbins titled Spurs. The story involved a terrible revenge enacted by a mean-spirited circus midget upon his normal-sized wife. 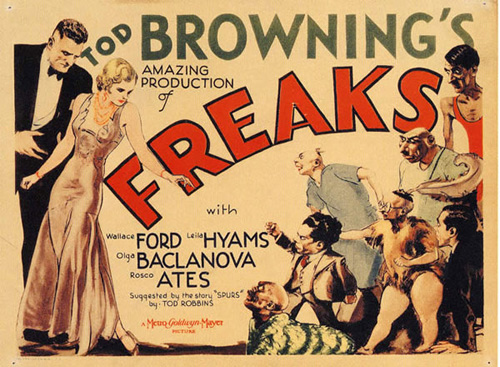 In adapting Spurs for the screen, writers Willis Goldbeck, Leon Gordon, Edgar Allan Wolf, and Al Boasberg retained the circus setting and the little-man/big-woman wedding, all the while de-vilifying the midget and transforming the woman into the true "heavy" of the piece.

German "little person" Harry Earles plays Hans, who falls in love with long-legged trapeze artist Cleopatra (Olga Baclanova). Discovering that Hans is heir to a fortune, Cleopatra inveigles him into a marriage, all the while planning to bump off her new husband and run away with brutish strongman Hercules (Henry Victor). What she doesn't reckon with is the code of honor among circus freaks: "offend one, offend them all." 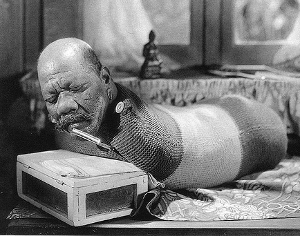 Upon its initial release, Freaks was greeted with such revulsion from movie-house audiences that MGM spent the next 30 years distancing themselves as far from the project as possible. For many years available only in a truncated reissue version titled Nature's Mistakes, Freaks was eventually restored to the original release print which you see here today.

Special thanks to Hal Erickson for the extended history on Freaks!

Comment by Pilsner Panther on August 1, 2011 at 6:18am
"Freaks" is both nightmarish and beautiful, or some strange combination in between. No wonder it tanked at the box office on its first release, and also no wonder that it's a modern cult film favorite... nothing else that came out of 30's Hollywood is anything like it!