The first tank built in France wasn't an instant success. In fact, it wasn't a success at all. 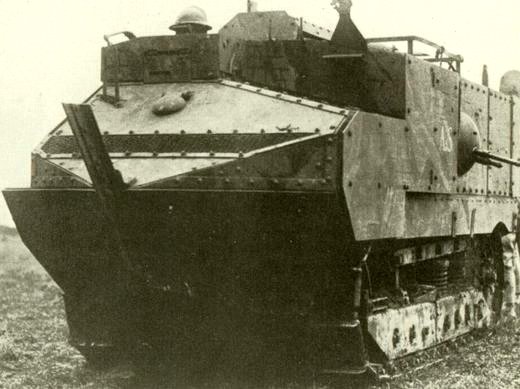 Schneider & Co. was a large arms manufacturer in France. Having been given the order to develop heavy artillery tractors, in January 1915 the company sent out its chief designer, Eugène Brillié, to investigate tracked tractors from the American Holt Company, at that time participating in a test programme in England. On his return Brillié, who had earlier been involved in designing armoured cars for Spain, convinced the company management to initiate studies on the development of a Tracteur blindé et armé (armoured and armed tractor), based on the Baby Holt chassis, two of which were ordered. 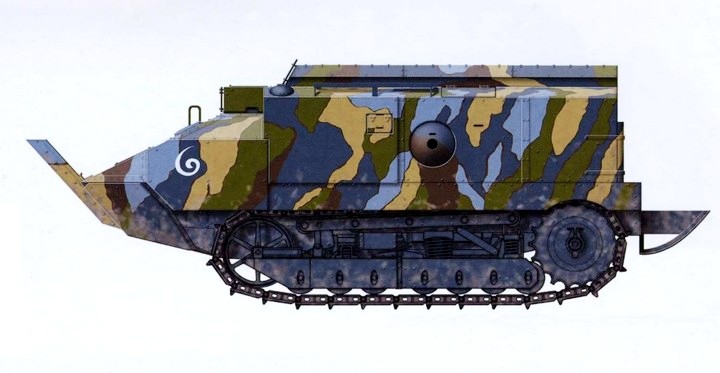 Experiments on the Holt caterpillar tracks started in May 1915 at the Schneider plant with a 75 hp wheel-directed model and the 45 hp integral caterpillar Baby Holt, showing the superiority of the latter. On 16 June, new experiments followed in front of the President of the Republic Raymond Poincaré, leading to the order of 10 armored tracked vehicles for further testing. In July 1915 the Schneider programme was combined with an official one for the development of an armored barbed wire cutter by engineer and Member of Parliament Jules-Louis Breton, the Breton-Prétot machine. Ten of the fifteen available Baby Holt vehicles were to be armoured and fitted with the wire cutter. On 10 September, new experiments were made for Commander Ferrus, an officer who had been involved in the study (and ultimate rejection) of the Levavasseur tank project in 1908. 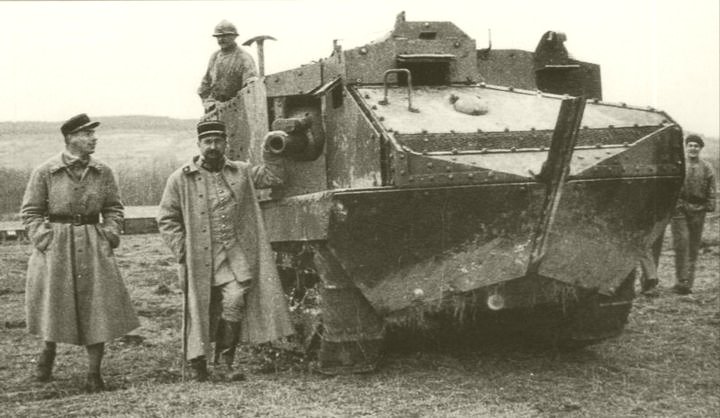 On 9 December 1915 in the Souain experiment, a prototype armored tank, a Baby Holt chassis with boiler-plate armour, was demonstrated to the French Army. Among the onlookers were General Philippe Pétain, and Colonel Jean-Baptiste Eugène Estienne (1860–1936), an artillery man and engineer held in very high regard throughout the army for his unmatched technological and tactical expertise. The results of the prototype tank were excellent, displaying remarkable mobility in the difficult terrain of the former battlefield of Souain. The length of the Baby Holt however appeared to be too short to bridge German trenches, justifying the development of longer caterpillar tracks for the French tank project. For Estienne the vehicle shown embodied concepts about AFVs which he had been advocating since August 1914. 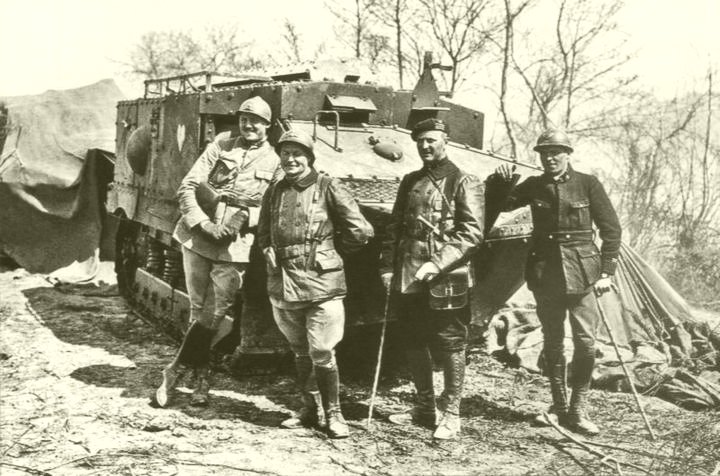 On 12 December he presented to the High Command a plan to form an armored force, equipped with tracked vehicles. This plan met with approbation and in a letter dated 31 January 1916 Commander-in-chief Joffre ordered the production of 400 tanks of the type designed by Estienne, although the actual production order of 400 Schneider CA1 was made a bit later on 25 February 1916, at a price of 56,000 French francs per vehicle. In January it had been decided not to use the Baby Holt chassis, but the longer 75 hp Holt tractor; for this the armoured superstructure had to be completely changed, which was done in an army workshop in February. The first vehicle of the production series was delivered on 5 September. Meanwhile, production had shifted to the SOMUA company, a dependency of Schneider.

To the modern eye, the tank is hardly recognizable as such. It has no turret, and its not very prominent main armament, a fortification petard mortar, the 75 mm Blockhaus Schneider, was placed in a sponson in the right front corner. Two 8 mm Hotchkiss machine guns, projecting from the flanks in ballmounts, complement the small gun. Another awkward feature is the overhang of the frontal part of the chassis which had been designed to crush down barbed wire. However this feature caused the tank to ditch itself readily. The fighting compartment is extremely cramped: the crew of six was mostly flat on their bellies in a 90 cm space between the roof and the 60 hp (45 kW) engine. Luckily, top speed was only 8 km/h. All this was protected by 11 mm steel plate, later improved by a spaced armor of 5.5 mm, raising the weight to 13.5 tons. 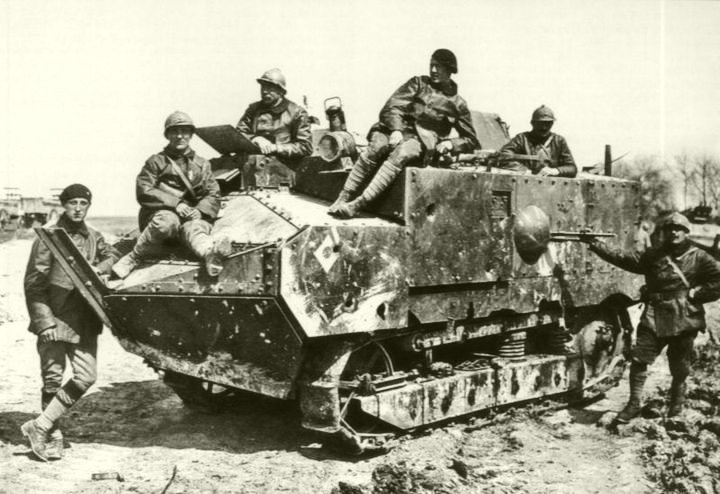 As their production numbers were more ambitious the French lagged behind the British somewhat — it took them more time to build larger factories — deploying their tanks for the first time on 16 April 1917 at Berry-au-Bac during the infamous Nivelle Offensive. Their first use was a complete disaster as 57 of 132 fielded tanks were destroyed by German artillery.

A Württemberg unteroffizier from Füsilier-Regiment Kaiser Franz Josef von Österreich (4. Württembergisches) Nr.122, lies beside a knocked out Schneider CA1 tank. On the tank is written (translation): "So far and no further - Shock troop 122". This particular tank has been the scene of many such memento photos, as evidenced by the previous chalk-scrawled messages, wiped away as each new regiment passes through the area.

Twenty units with Schneider tanks were formed, named Artillerie Spéciale 1-20, under the overall command of the now brigadier Estienne. In 1918 these "old" tanks were gradually phased out in favour of the new Renault FT-17, but production only ended in August 1918, when exactly 400 had been built including the prototype. At least one Schneider was delivered to Italy, which after testing abandoned the plan to build 1500 of them. 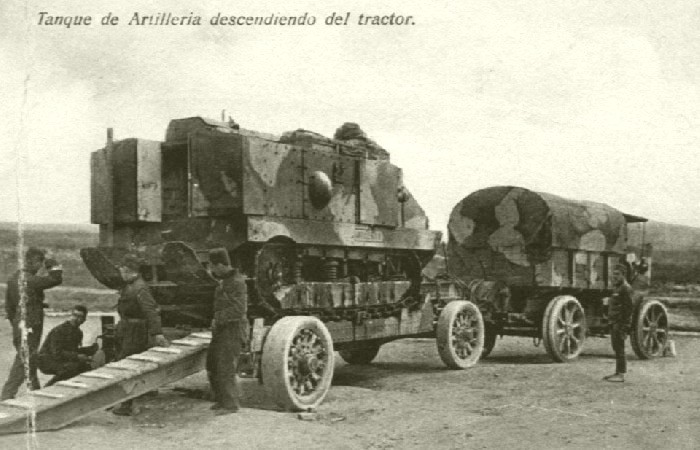 After the war, the tanks were rebuilt as recovery vehicles and tank transporters. Six were sold to Spain in 1922, from 1923 to 1926 fighting in Morocco (see above), the surviving four vehicles later taking part in the Spanish Civil War near Toledo on the side of the Republicans (below). 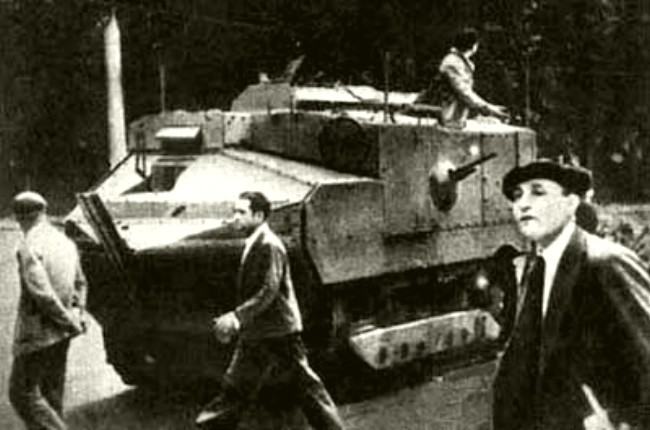 The only surviving vehicle, at the Musée des Blindés in Saumur, is also the world's oldest tank in running condition. It was preserved in the Aberdeen Proving Ground Ordnance Museum in Maryland, USA and later donated to France for restoration. 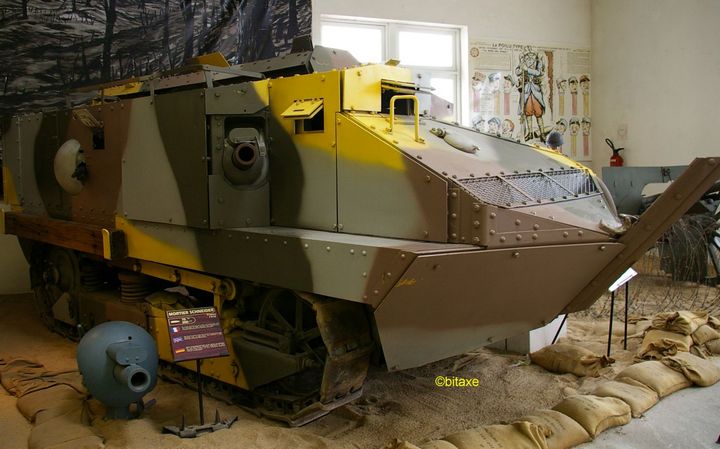 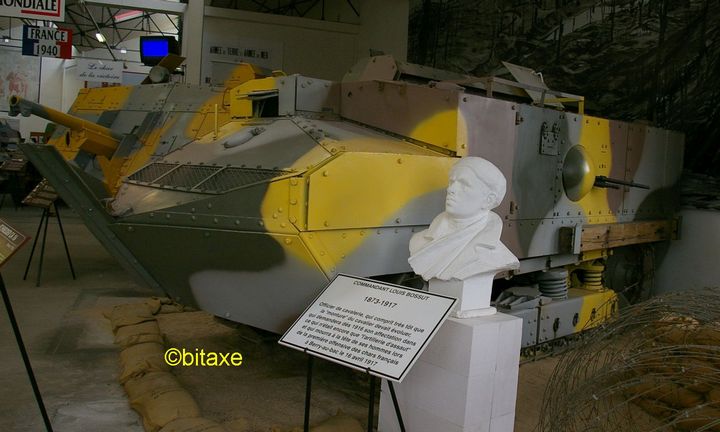 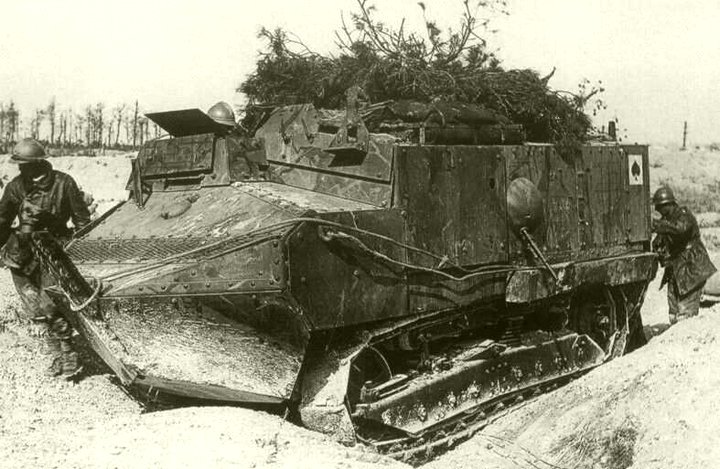 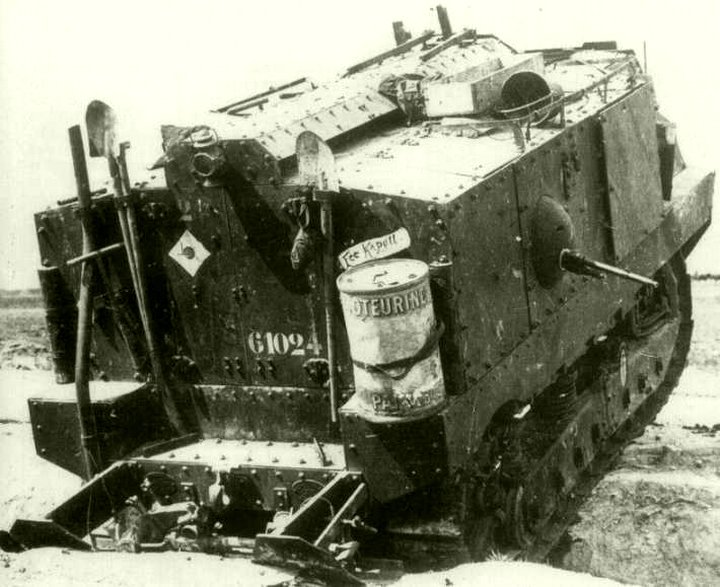 The Chauchat was produced at a time extreme duress to attempt to stem defeat in a war happening down the road, and there is no way it would had been selected for service during peace time.

BTW the Americans were also issued it because the ordinance Chief Crozier of the US Army was having a feud with Col. Lewis, of Lewis gun fame, so it not as if the US Army made some questionable decisions as well.

In English language publications it is way too easy to heap on the French as incompetents, (even if the catastrophic time of 1940, everybody else was getting their asses kicked by the German Army, including the Brits).

let's be fair. Chauchat was garbage, but the standard MG of the French army was M1914 Hotchkiss, a much better design also used by the American Expeditionary Forces and by a number of other armies: Japanese, Brazilian and Spanish, to name just a few.

And where would you keep its crew of six?

Comment by Miss Lenore Arcangelo Mellotron on May 13, 2011 at 8:54pm
Wonderful pics and article... I'd love to get one of those big bad toys! Just to keep it in a collector's luxury garage ;)

Nor could the French build a decent machine gun during WWI. The ﻿"Chauchat" or CSRG M1915 was garbage.

I have read some accounts by French tank crews, and they make pretty terrifying reading.

Also the German had about the same success with their first armored vehicles.