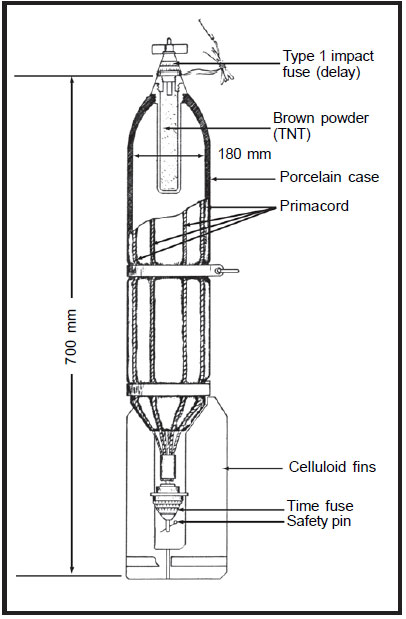 The campaign architects imagined a single plane, flying over the American West Coast, armed with a very special weapon, the Uji bomb.

The 55-pound bomb would be freed over the United States and somewhere between 900 and 660 feet, the case would explode expelling its deadly contents- plague carrying fleas.

Since the age of early civilizations, when plagues were expressions of God’s rage, the devastating effect of disease has methodically rewritten human history. However, through time and scientific advances the malignant desire to turn it against one’s enemy, as a weapon, found willing cohorts.

Earliest example of weaponized plague followed the Golden Horde’s torrent from the east. Black Plague, common to rodents of the Steppes, infected the advancing Mongol armies resulting in weapons in the form of cadavers. Mongol soldiers who’d succumb to the devastating were then catapulted at besieged city of Kaffa in the Crimea, crushing the Tartar hold outs after nearly three-years.

Biological, as well as chemical, weapons research reached horrific peaks during World War I and found reborn interest as World War II churned into its third and fourth year.

The Japanese and their infamous Unit 731 began exploring biological and chemical weapon programs in occupied Manchuria. One such weapon developed by the Japanese scientists was the Uji bomb, the Imperial Japanese flea munitions.

The frangible aerial released bomb was designed to hold 30,000 plague infected fleas. Porcelain-cased, the Uji had an inner container wrapped in detonation cord, which exploded, freeing the thousands of fleas at a predetermined height. Should the timed fuse fail to detonate, the munition would explode upon impact. Japanese scientists estimated 80% of the plague fleas would survive the airburst.

During their occupation of Manchuria, Japanese forces conducted 4,000 test of the Uji bomb and plague flea vector. With the tides of war crashing back upon the Japanese, plans were laid to infect America’s island hopping forces with plague fleas.

And in the most ambitious of missions, Japanese Imperial Navy’s giant I-400 aircraft carrying submarines were readied to unleash fighter bombers ladened with Uji-bombs over New York City and North America’s western seaboard.

It’s important to note that this unusual weapon, created by one the darkest of war-time laboratories, found a duplicate thinking from the Allies. Secretly, the Canadian military led all Allied efforts in developing biological weapons for the cause. At their Grosse Isle facility- site of the devastating typhus outbreak of the 19th century- the Canadian military worked to develop a flea-borne weapon that infected the target with typhus and plague.

In the Pacific, Japanese command argued the plans of plague devastation of the United States was inhumane, as a result the operation was scrubbed and the fleas were never loosed over America.

Comment by Piper Williams on May 5, 2010 at 5:10pm
Wow. Unreal is right. Just goes to show they were willing to do anything to slow us down..

Reminds me of the "bat bombs" that the US was developing to burn down Tokyo.