Is there a place for commercial art in a "classic" Socialist society? 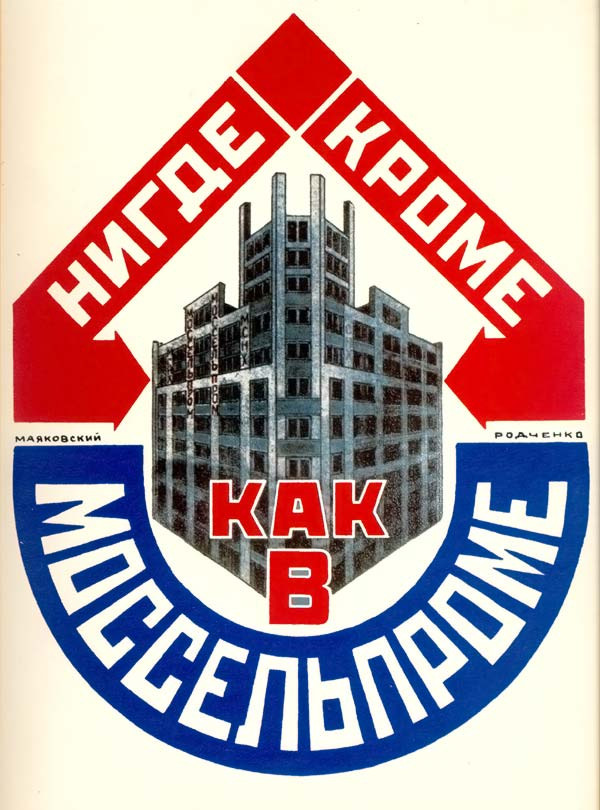 The obvious answer is "no". Everything's nationalized, planned and centralized, thus eliminating competition between manufacturers, services and brands. So what's left to advertise? But this answer is obvious only to those who do not understand the needs of such society and its rulers. There's still a need to promote important, although not compulsory, initiatives like investment into government bonds* : 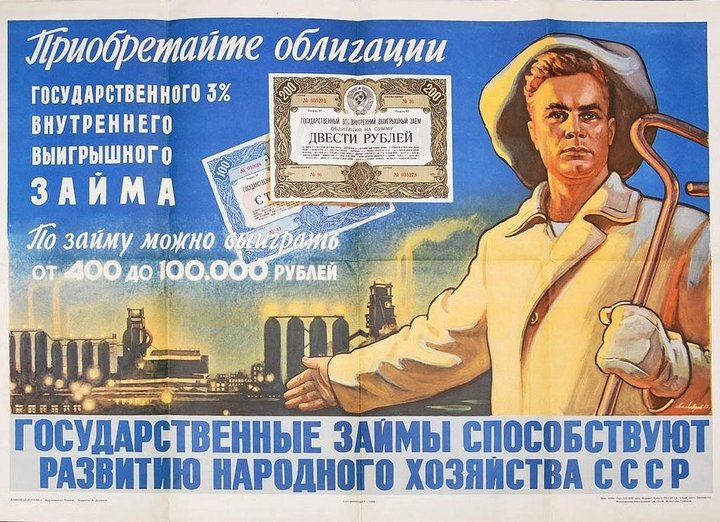 ... or into a publicly owned airline: 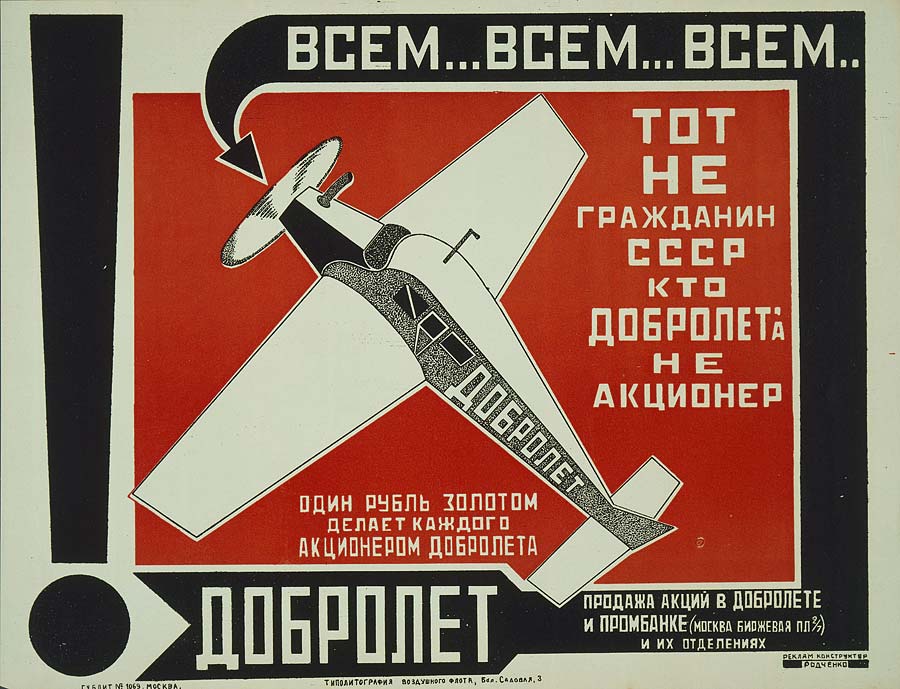 ... or in lottery tickets (to fund aviation clubs and chemical warfare training, with a hope to win a round-the-world trip): 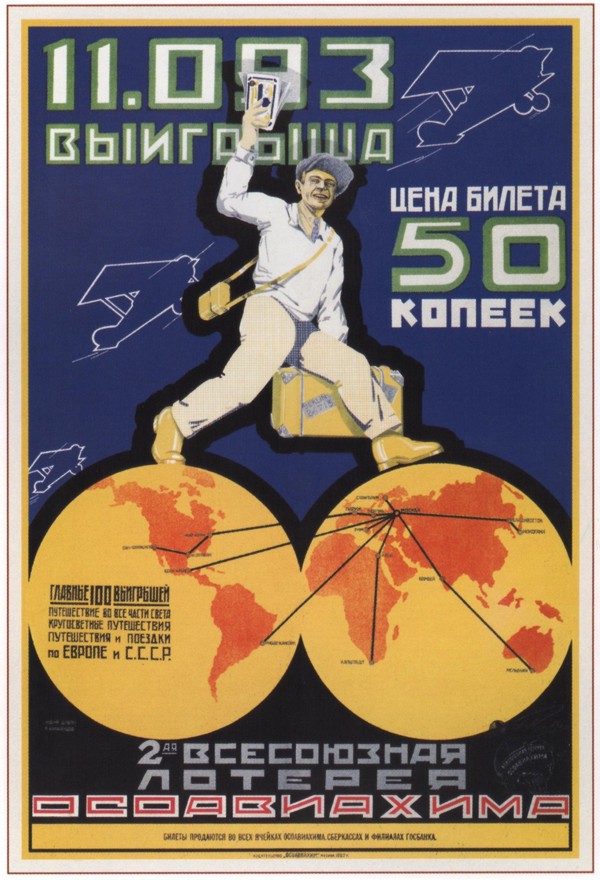 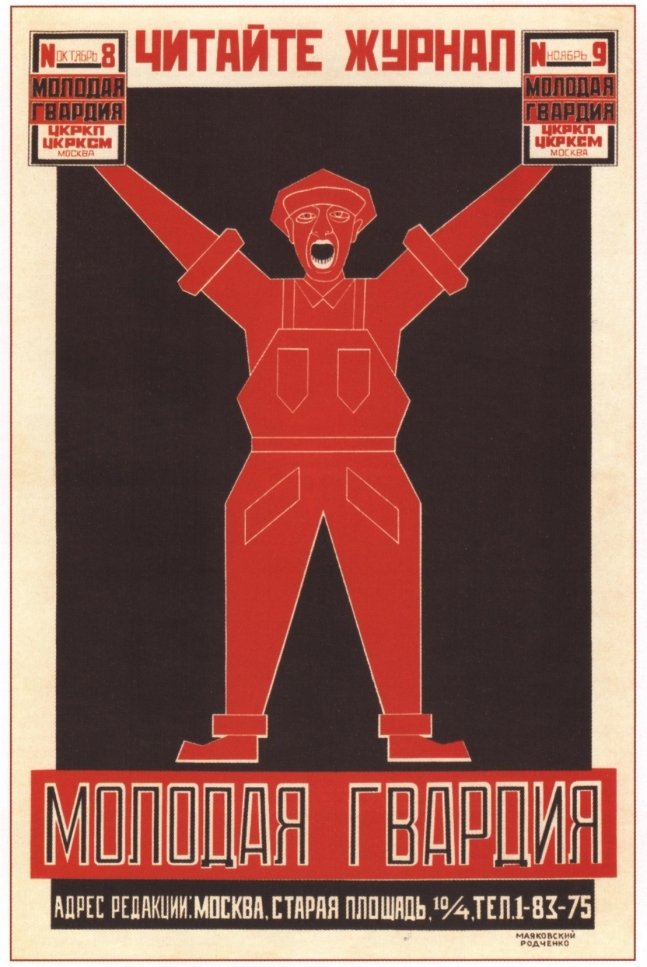 ... or to keep your money (if there's left some, after all these investments) in Savings Bank: 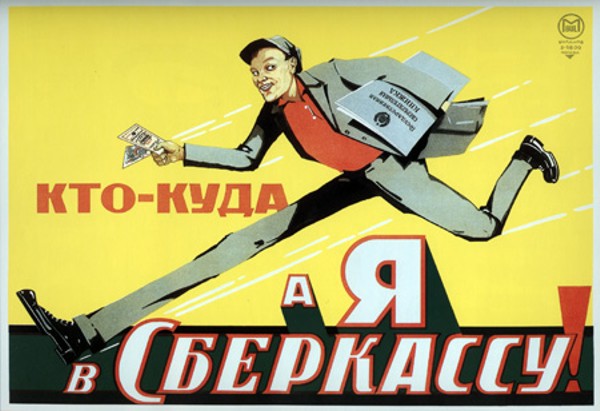 In brief, Socialist advertising is (or, better to say, was) used for urging comsumer to part with his/her money. Besides, in 1920s, behind countless red banners and revolutionary slogans, there were mixed economics with different forms of ownership, from private to joint ventures with foreign capital, state-owned and publicly owned in between. Some of the ads looked like as if Great War and Revolution never happened: 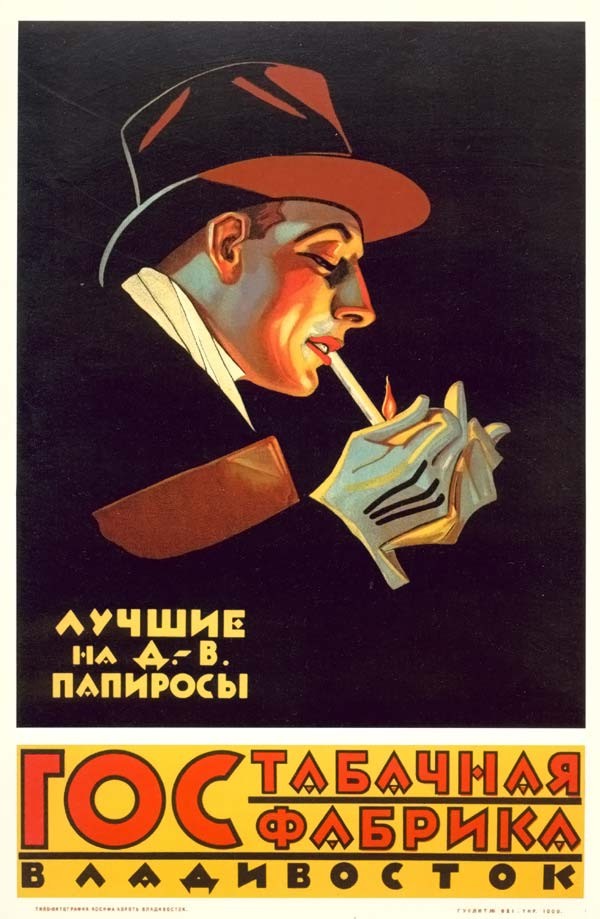 Like this gentleman, wearing a top hat and white gloves, advertising a state-owned tobacco factory in Vladivostok ... 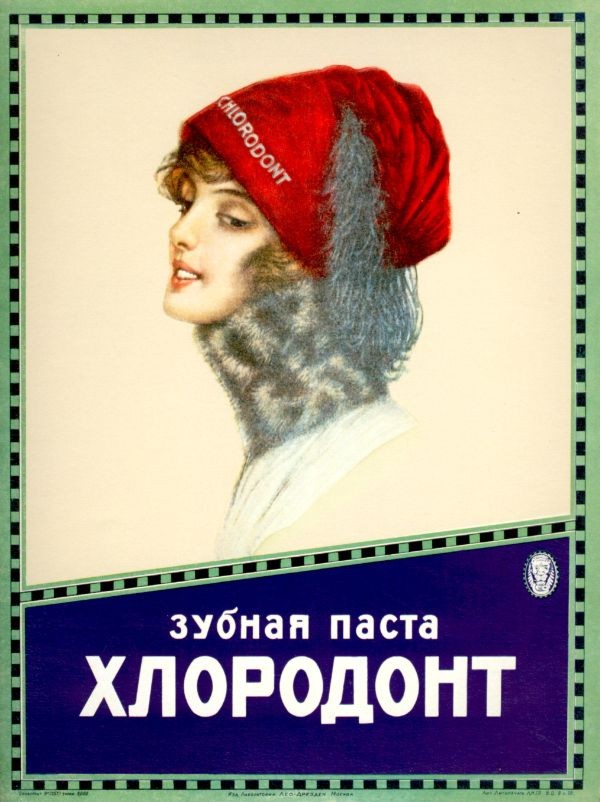 ... or this lovely lady, advertising German toothpaste for a joint venture ... 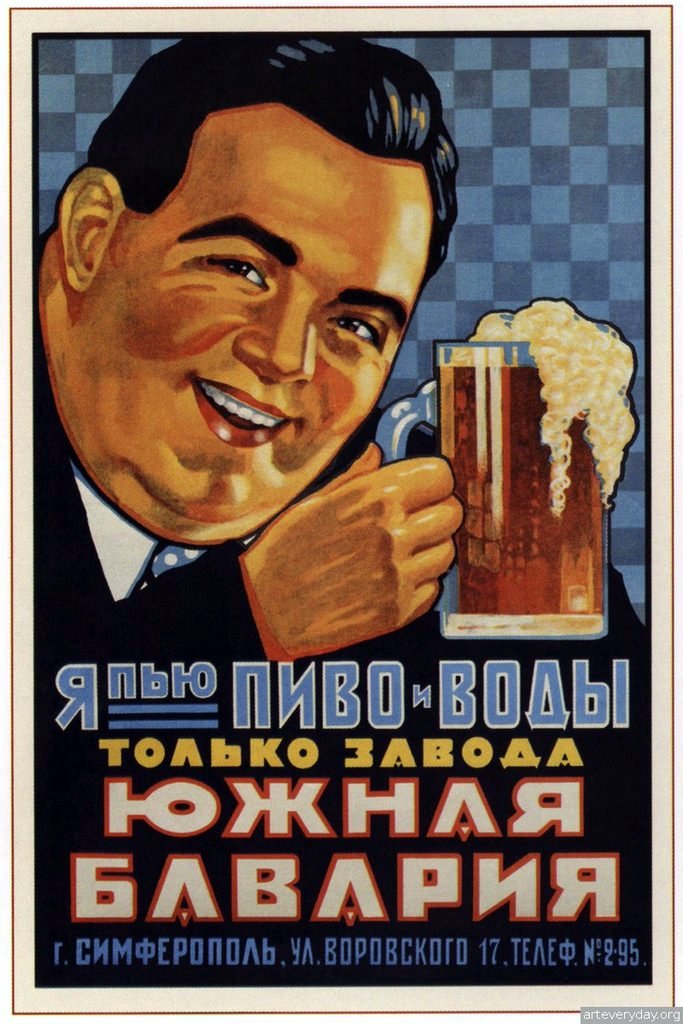 ... or this beer-loving character, so fond of a Crimea brewery appropriately named "Southern Bavaria".

There was competition in 1920s: state department stores vs. private commerce, state- and co-operative groceries vs. marketplace, domestic production vs. imports, etc. The most famous Soviet grocery of the period was the Mosselprom (see the headline picture) which hired two giants of Avant-garde, Vladimir Mayakovsky and Alexander Rodchenko, for its campaign. Mayakovsky coined the slogan: "Nowhere but in Mosselprom!". Some ads (by other artists) were less Avant-garde but more informative: 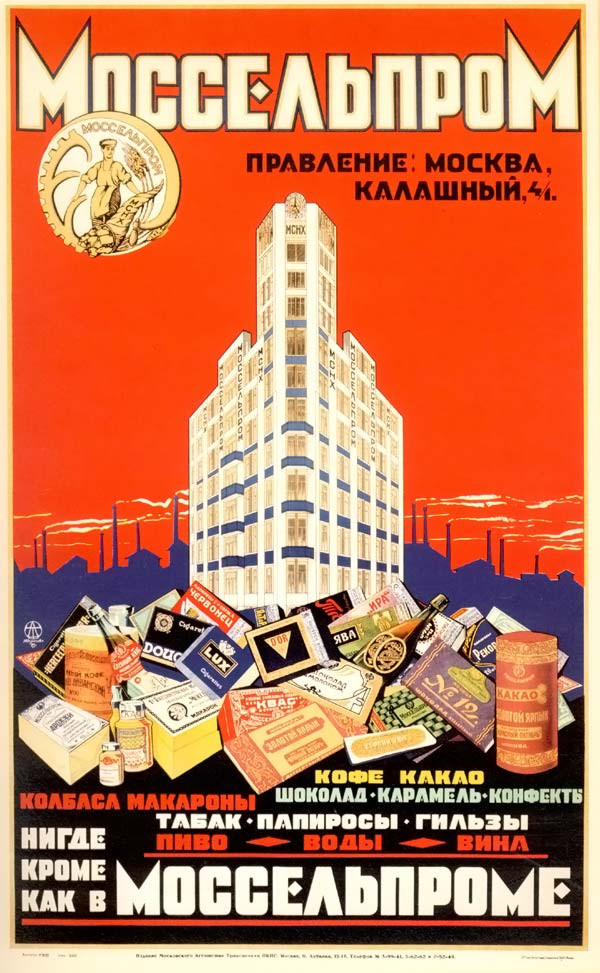 By the way, the Mosselprom Building still exists.

The largest department store, GUM (in the Red Square, just opposite the Kremlin), also launched a campaign aimed at the visitors arriving to the Red Capital: 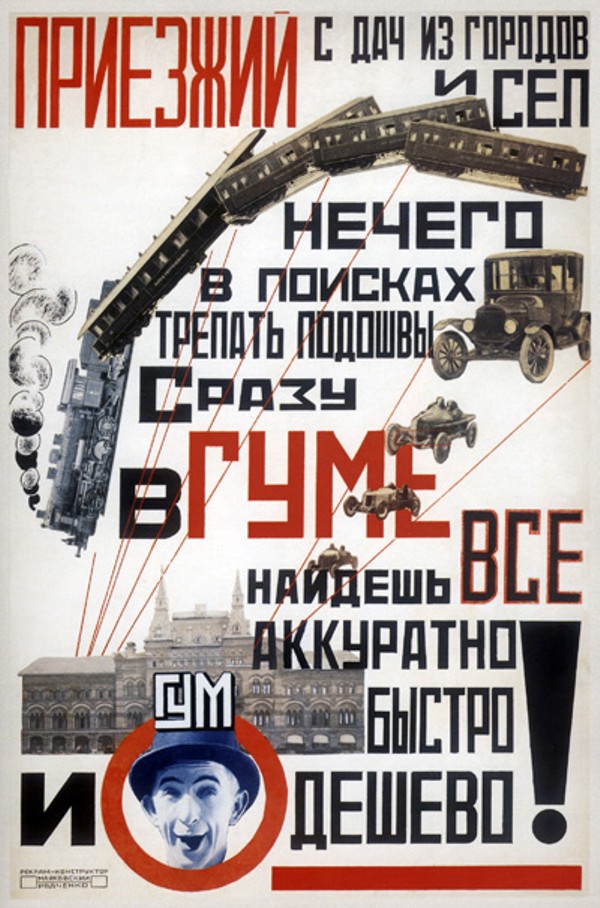 Mayakovsky & Rodchenko guarantee: everything's on sale, lowest prices, best service. No need to wear out your shoes searching for something better!

Another campaign was launched by the TZh, a state-owned holding which produced perfumes and toiletry: 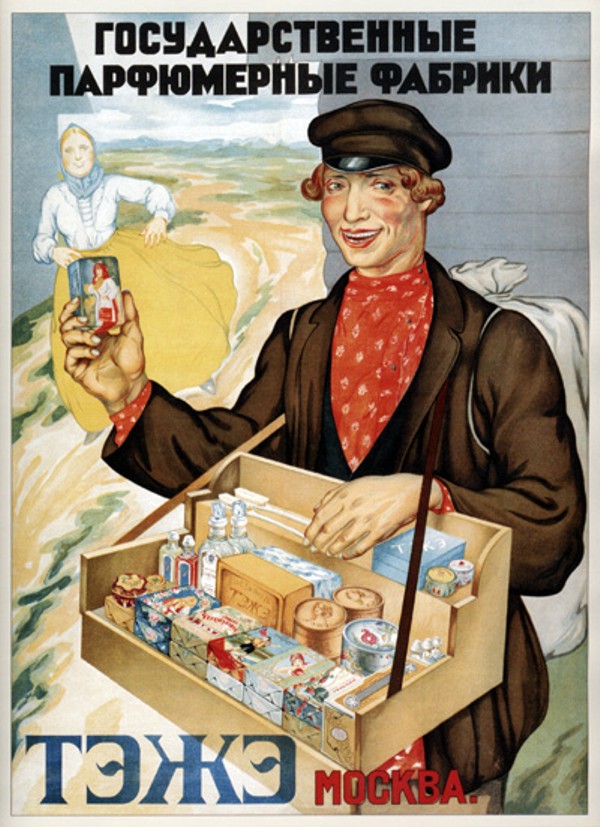 This guy looks like a typical country salesman. Well, his looks are good for the countryside.

But in Moscow, the Rezinotrest (Rubber Trust) posters were pure Futurism! Pacifiers ad, by Rodchenko & Mayakovsky.

There's more in our album (38 images with comments). Browse it or enjoy the slideshow:

Next week, Captain Cigar will take you to 1930s.

* Sorry, this poster is of 1955 vintage, the one and only anachronism here; mysteriously, nothing from 1920s or even 1930s in our Soviet Bonds Department.

Oh, yes. I'm very familiar with the NEP. These images do make more sense in that context. Very enlightening.

Comment by Pilsner Panther on April 15, 2011 at 5:48am
I once came across the astonishing fact (if it's true), that roughly 90% of silent films have been lost. Considering that early nitrate film started to deteriorate almost immediately after it was produced, and that it was also highly flammable and easily damaged, it's amazing that we even have 10% of it left!

Comment by lord_k on April 15, 2011 at 3:36am
Oh, "The Bakery"! I've seen a short (half a minute) clip of this movie, not knowing who's the big star. I assume he was quite popular in Russia, sharing the fame with Charlie Chaplin, Max Linder (Gabriel Leuvielle), Carl Schenstrøm & Harald Madsen (Danish comic duo known in the UK as Long & Short, and in Russia as Pat & Patachon) and Andre Deed aka Cretinetti.

Here you go, Lord K., Larry Semon and uncredited co-star Oliver Hardy in "The Bakery," from 1921. This film is in pretty good condition (of the dozen or so surviving Semon comedies, most aren't). Very wild and uninhibited physical slapstick, not unlike what Buster Keaton and Harold Lloyd were doing at the same time. Oddly enough, I found this on a Russian website, so between that and the poster, I have to assume that Semon had a Russian audience that knew his face, and he's still remembered there today. Of course, one of the great things about silent film is that it has no language barriers!

Really! Well, Larry Semon is not familiar to me (with all my affection for silent movies). But I believe his head was clipped from a promotional poster to be pasted into one of the wildest Rodchenko's photocollages which has nothing to do with cinema.

You've read about the NEP, I'm sure. Now you can re-read with new visuals, not just portraits of Trotsky, Zinoviev and Stalin.

Comment by Pilsner Panther on April 15, 2011 at 12:11am
The twelfth one down features a photo of the nearly-forgotten American silent film comic Larry Semon. I can't read a word of Russian, but I'm guessing that it's a lobby poster for one of his films. If Semon is remembered for anything at all today, it's for giving Oliver Hardy his start in the movies, long before he teamed up with Stan Laurel. Which is too bad, because the few Semon two-reelers that have survived are very funny.

Comment by Larry on April 14, 2011 at 7:33pm
Absolutely fantastic posting. I always considered myself fairly knowledgeable on the subject but this really was an education for me.

OK, today's the 81th anniversary of his death.