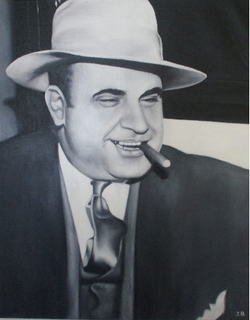 During the Prohibition era, gangsters ruled many of the large cities, becoming rich from owning speakeasies, breweries, brothels, and gambling joints. These gangsters would carve up a city between rival gangs, bribe local officials, and become local celebrities. By the late 1920s, Chicago was split between two rival gangs: one led by Al Capone and the other by George "Bugs" Moran. Capone and Moran vied for power, prestige, and money; plus, both tried for years to kill each other.

In early 1929, Al Capone was living in Miami with his family (to escape Chicago's brutal winter) when his associate Jack "Machine Gun" McGurn visited him. McGurn, who had recently survived an assassination attempt ordered by Moran, wanted to discuss the ongoing problem of Moran's gang. In an attempt to eliminate the Moran gang entirely, Capone agreed to fund an assassination attempt and McGurn was placed in charge of organizing it.

McGurn planned carefully. He located the Moran gang's headquarters, which was in a large garage behind the offices of S.M.C. Cartage Company at 2122 North Clark Street. He selected gunmen from outside the Chicago area, to ensure that if there were any survivors, they would not be able to recognize the killers as part of Capone's gang. McGurn hired lookouts and set them up in an apartment near the garage. Also essential to the plan, McGurn acquired a stolen police car and two police uniforms.

With the plan organized and the killers hired, it was time to set the trap. McGurn instructed a local booze hijacker to contact Moran on February 13. The hijacker was to tell Moran that he had obtained a shipment of Old Log Cabin whiskey (i.e. very good liquor) which he was willing to sell at the very reasonable price of $57 per case. Moran quickly agreed and told the hijacker to meet him at the garage at 10:30 the following morning.

On the morning of February 14, 1929, the lookouts (Harry and Phil Keywell) were watching carefully as the Moran gang assembled at the garage. Around 10:30, the lookouts recognized a man heading to the garage as "Bugs" Moran. The lookouts told the gunmen; the gunmen climbed into the stolen police car.

When the stolen police car reached the garage, the four gunmen (Fred "Killer" Burke, John Scalise, Albert Anselmi, and Joseph Lolordo) jumped out. (Some reports say there were five gunmen.)

Two of the gunmen were dressed in police uniforms. When the gunmen rushed into the garage, the seven men inside saw the uniforms and thought it was a routine police raid. Continuing to believe the gunmen to be police officers, all seven men peacefully did as they were told. They lined up, faced the wall, and allowed the gunmen to remove their weapons.

The gunmen then opened fire, using two Tommy guns, a sawed-off shotgun, and a .45. The killing was fast and bloody. Each of the seven victims received at least 15 bullets, mostly in the head and torso.

The gunmen then left the garage. As they exited, neighbors who had heard the rat-tat-tat of the submachine gun, looked out their windows and saw two (or three, depending on reports) policemen walking behind two men dressed in civilian clothes with their hands up.

The neighbors assumed that the police had staged a raid and were arresting two men. After the massacre was discovered, many continued to believe for several weeks that the police were responsible.

Six of the victims died in the garage; Frank Gusenberg was taken to a hospital but died three hours later, refusing to name who was responsible.

Though the plan had been carefully crafted, one major problem occurred. The man that the lookouts had identified as Moran was really Albert Weinshank. "Bugs" Moran, the main target for the assassination, was arriving a couple minutes late to the 10:30 a.m. meeting when he noticed a police car outside the garage. Thinking it was a police raid, Moran stayed away from the building, unknowingly saving his life.

The massacre that took seven lives that St. Valentine's Day in 1929 made newspaper headlines across the country. The country was shocked at the brutality of the killings. Police tried desperately to determine who was responsible.

Al Capone had an air-tight alibi because he had been called in for questioning by the Dade County solicitor in Miami during the time of the massacre. "Machine Gun" McGurn had what became called a "blonde alibi" -- he had been at a hotel with his blonde girlfriend from 9 p.m. on February 13 through 3 p.m. on February 14. Fred Burke was arrested by police in March 1931 but was charged with the December 1929 murder of a police officer and sentenced to life in prison for that crime.

Though this was one of the first major crimes that the science of ballistics was used, no one was ever tried or convicted for the murders of the St. Valentine's Day Massacre. Though the police never had enough evidence to convict Al Capone, the public knew he was responsible. In addition to making Capone a national celebrity, the St. Valentine's Day Massacre brought Capone to the attention of the federal government.