But it was not built for regular passenger service.

"In 1935, it occurred to Louis Liggett, founder of the United Drug Company (Rexall), that rather than asking thousands of cash-strapped Rexall druggists to come to a national convention -- he could simply take the national convention to them!" - writes Todd @ ThemeTrains.com. - "From that, the Rexall Train was born". "With the US economy far from recovered, finding surplus railroad equipment was a snap." - Todd goes on. - "Twelve heavyweight Pullman cars were found that could quickly be converted to exhibition cars, lecture cars, and support cars. Each car received a new roof and diaphragms that made the train the longest 'streamlined' train yet fielded. The locomotive was leased from the New York Central. Their aged 4-8-2 L-2c Mohawk #2873 was given a thorough makeover based on the styling of the railroad's own Commodore Vanderbilt, the first streamlined steam locomotive in America, and converted from coal to oil. The entire train was painted Rexall blue and white (orange didn't come into the corporate palette until years later) with black roofs". "The front half of the train was planned for public exhibition. To that end, four Pullman cars were outfitted with displays of virtually every product Rexall offered. The hottest products lent their names to the cars of the train. Kantleek, Firstaid, Ad-Vantages, Research, Bisma-Rex, Cara Nome, and six other star-product names adorned on the sides of the cars.

After three days of public display, the train left Boston on March 29, 1936. The staff soon settled into a routine. To the public it looked like this: When the Rexall Train came to town, people would stop by their local Rexall store to get free tickets before heading down to the station. When the train arrived, a big 'Rexall Drug' sign was hoisted on the side of the Ad-Vantages -- and the entrance doors flung open on the Research. Circa 1936, looking west. Rexall Train is parked on the former interurban yard trackage. (via conford4 @ Flickr)

Some display cities saw over 2500 people per hour pass through the four exhibit cars! Good thing the entire train had the newest of luxuries -- air conditioning". 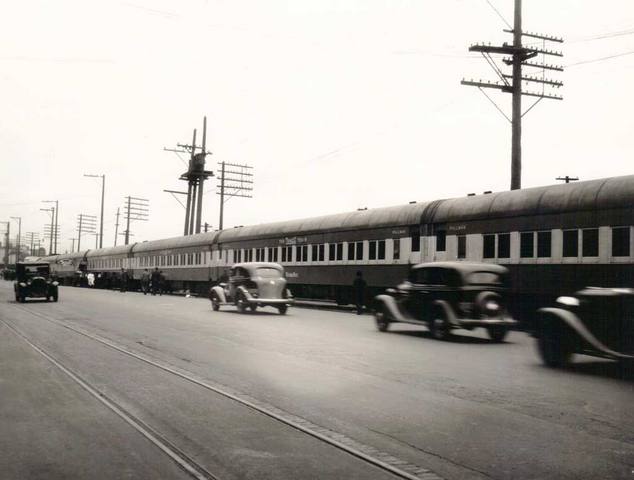 "In 109 cities the train was scheduled to host druggists' conventions. This is where the next four Pullmans came in handy. The Klenzo, Symphony, Adrienne, and Mi-31 were all converted to the standards of a topnotch convention hotel. Klenzo and Adrienne were lecture cars connected by a PA system. Between them was the dining car Symphony -- suited for serving hundreds of conventioneers a mouthwatering buffet lunch or dinner anytime, anywhere. (Pullman had provided three master chefs.) After a day of seminars, the Mi-31 offered two bars and a lounge area for relaxation. Taking the folding chairs out of the lecture cars, conventioneers had room to mingle and dance the night away -- to the tunes of the train's 4-piece orchestra".

"Bringing up the rear of the train were the cars Joan Manning (staff sleeper) and Puretest -- Mr. Liggett's private Pullman observation car. (You didn't think he was going to stay back at headquarters, did you?) As the train made its way from east to west, its popularity with the public grew. Large newspaper ads announcing the train's visit became the norm.

What started out as mostly a convention train became a PR tour de force. As the train moved into its third month, Rexall druggists along the train's path began to angle of attention. With enough pull, Liggett could be persuaded to stop the train for a morning or afternoon display in the hometown of an impassioned Rexallite (as they were called). Liggett could also be persuaded to stop the train in a town where a local druggist was on the verge of "going Rexall". Contract in hand, Liggett would show the prospect the wonders of Rexall -- as thousands of potential customers surged toward the exhibit cars. For many, it was an irresistible proposition". 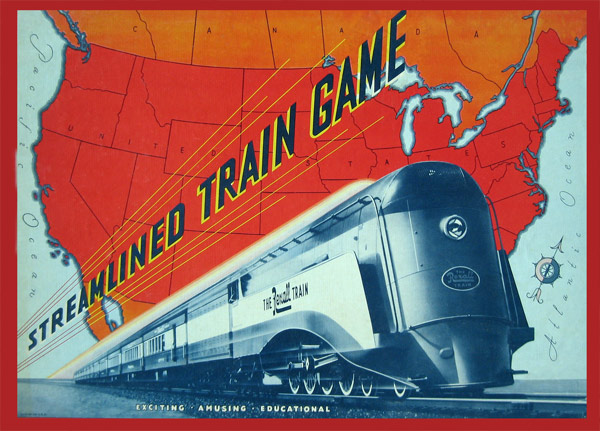 "The tour made its way from Boston through the Midwest, Southwest, and north up the Pacific coast. Zigzagging across Canada and the US Northwest, the train descended into Chicago for a 3-week refurbishment half way through its tour. Back to the east coast it went before heading south, west, southeast, and north again -- finishing up on November 24, 1936 in Atlanta, GA. In the end, the train visited every state except Nevada.
Final tally: 29,000 miles, 47 states and Canada, 2.3 million visitors for the Million Dollar Rexall Streamlined Train.

It was the United Drug Company's finest hour." 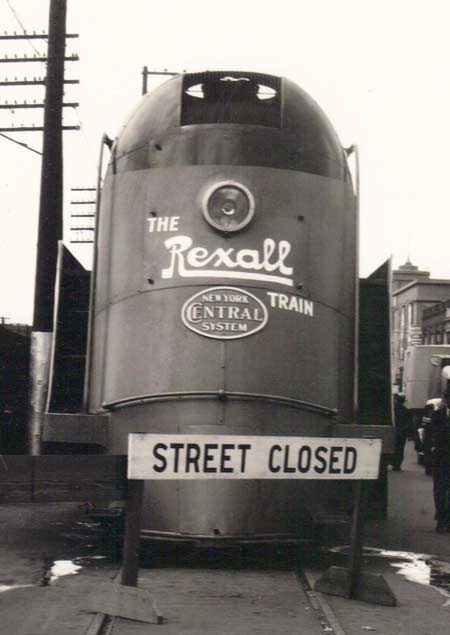 Comment by lord_k on October 4, 2010 at 6:59am
To Myke:
Use the ThemeTrains link and you'll see corporate logo, in blue (Rexall Blue), white and orange (added later).