The Atchison, Topeka and Santa Fe Railway's 3460 class comprised six 4-6-4 Hudson type steam locomotives built in 1937 by the Baldwin Locomotive Works for service between La Junta, Colorado and Chicago, Illinois, a fairly flat division of the railroad suited for the 4-6-4 type. They were substantially larger than the road's earlier 3450 class locomotives, and all were built oil-fired, although in a manner that would allow for easy conversion to coal firing. They had much in common with the Milwaukee Road's class F7 and the Chicago and North Western Railway's class E-4, all three types being fast, 84-inch drivered 4-6-4s for Midwestern service with 300 lb/in² boiler pressures. The first locomotive, #3460, was built streamlined; painted light, robin's egg blue and silver, it became known as the Blue Goose. It was the Santa Fe's only streamlined steam locomotive, featuring extensively in railroad publicity and was a railfan favorite. (Source: Wikipedia).

The Goose stayed in Santa Fe service until 1956. I don't know if it retained its streamline shrouding. The reason for its one-of-a-kind status is simple: in late 1930s AT&SF has been extensively dieselized, the management clearly preferred "new power" over the "old" one. So the 3460 was really a swan song of Santa Fe steam. The Blue Goose images are scarce. Some prints are sold on eBay but you can still get a pair of good pictures for free. Here are two from the Kansas Memory website: and a picture of three prints, none of them available on the Web: This picture is borrowed from Brasstrains.com. The Blue Goose is quite popular with the miniature railway fandom, the models are widely advertised, there is even a catalog: 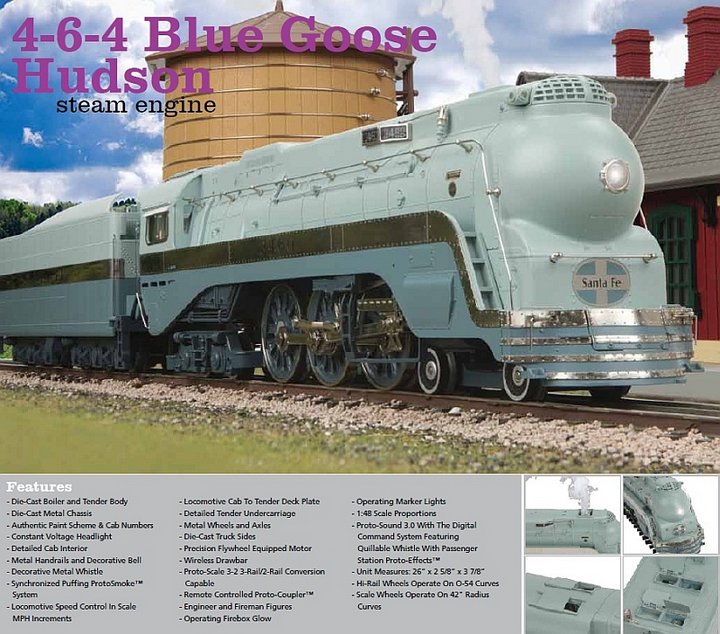 That's all for today... Gosh, 37 columns! When I started this Sunday Streamline business I planned it for half a year, 25-26 issues. And now I see a lot of streamliners ahead. We haven't been to Italy, the Netherlands and Turkey yet, Czechoslovakia and Australia are worth a second visit, Argentina and Canada are waiting patiently, as well as la belle France. There will be at least 20 new chapters in this story - if you're not bored, of course. Have a nice Sunday!

of course we ran a special on the GG1. Great design, an electric loco of unsurpassed beauty. I must admit that early EMC/EMD diesel-electric locomotives were beautiful, too.

Some of the most beautiful steam engines were created right at the end of the steam era... too bad! The great streamlined passenger locomotives could look like they were moving, even when they were standing still. Their replacement with diesel and electric motive power was basically a matter of economics. Aesthetic values? Those values didn't matter much at that point (when the private American rail system was facing extinction and a government takeover just to keep it functioning), although there were exceptions— like Raymond Loewy's Pennsylvania Railroad GG_!:

These locomotives served the Northeastern corridor of the U.S. passenger rail system for several decades, but were finally retired in the 1980's. Today's American rail passengers don't care about elegance, they just want to get from Point A to Point B without the train breaking down, and that's almost too much to ask. Sad, isn't it?

There's something personal in it for me too. In 1935-1936 my grandfather made a round-trip across the States. He traveled by car, a Ford V8. The only leg made by train was LA - San Diego, Santa Fe line. 11 years ago I made it in the opposite direction, from San Diego to Los Angeles, seeing both Union Stations (happily, they didn't change much since 1930s).

Comment by Larry on June 19, 2011 at 9:01pm
Wow! A Santa Fe line train. This one really comes home to me because my office is in what was the Santa Fe headquarters at the time.