The story of the Great Western diesel railcar began with its inventor, C. F. Cleaver of Hardy Railmotors. 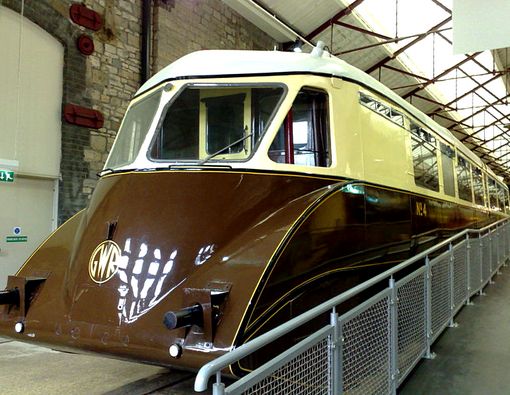 Hardy's were a subsidiary of the Associated Equipment Co. Ltd. (AEC), and they had provided petrol and diesel engined shunting locomotives in addition to four- and six-wheel drive lorries and tractors through their associated company, the Four Wheel Drive Lorry Company. Cleaver was a man of considerable zeal and realized that the established and successful 130 bhp 6-cylinder AEC diesel engine that was used in London buses and numerous other commercial vehicles, was capable of powering a lightweight self-contained railcar, especially if it utilised streamlining that was popular at the time. 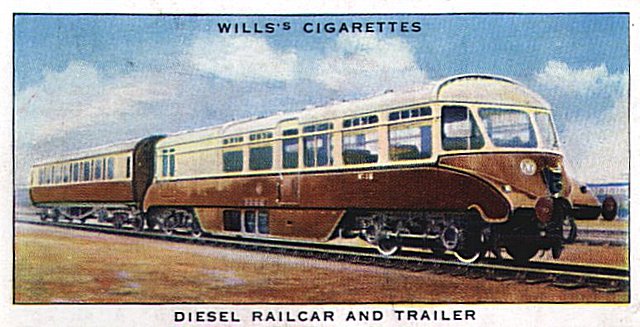 The body of the first prototype was broadly based on the popular 'Flying Hambuger' diesel unit of Deutsche Reichsbahn, but after wind tunnel tests were carried out at the Chiswick laboratory of the London Passenger Transport Board, the body was transformed into a sleek streamlined design with a waisted frontal area. Using the 8.85 litre diesel engine, drive was passed to a 5-speed pre-selective gearbox with a fluid flywheel to drive to a pair of axleboxes on one side of the railcar. The 69-seater body was built by Park Royal Coachworks of Willesden, another AEC subsidiary, and measured 62 feet in length and 9 feet in width. Maximum speed was 63 mph with control shared between the ends of the railcar.Before completion, the railcar was bought by the Great Western but prior to entering service, it was displayed at the International Commercial Motor Transport Exhibition at Olympia in November 1933. Such was the railcar's popularity at the exhibition, it was estimated that 35,000 people or 53.25 per cent of those that paid for admission to Olympia, visited the railcar. Great publicity, something that the Great Western thrived on, was also given to the railcars movement from Olympia to the GWR sidings at Brentford when the exhibition closed. 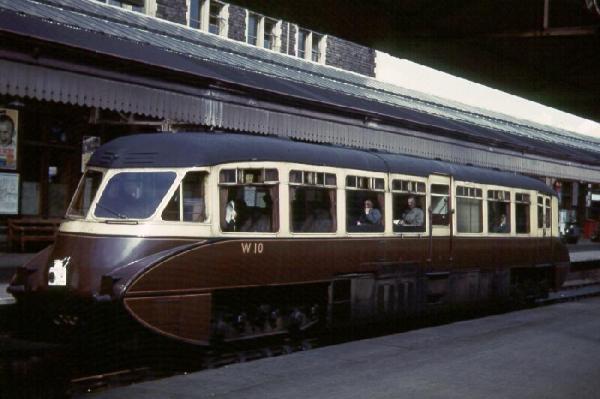 Within the month however, the railcar was taken out of service for attention to its braking system and method of engine mounting. At the same time, automatic train control was fitted and the car resumed service in February 1934, completing 60,000 miles and transporting 136,000 passengers in its first year alone. 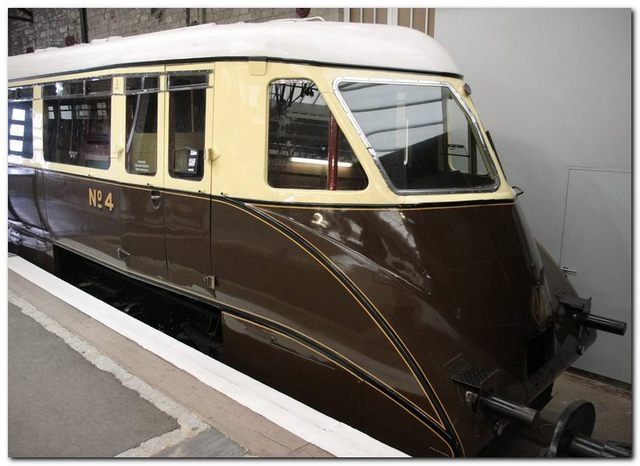 Three cars, superficially similar, but with two AEC diesels that allowed them to reach 80 mph, were built for the Birmingham - Cardiff route. The rounded lines of the first examples built led to their nickname: "flying banana". Car no. 4, of the first batch, is preserved in the Swindon Steam Museum Collection. 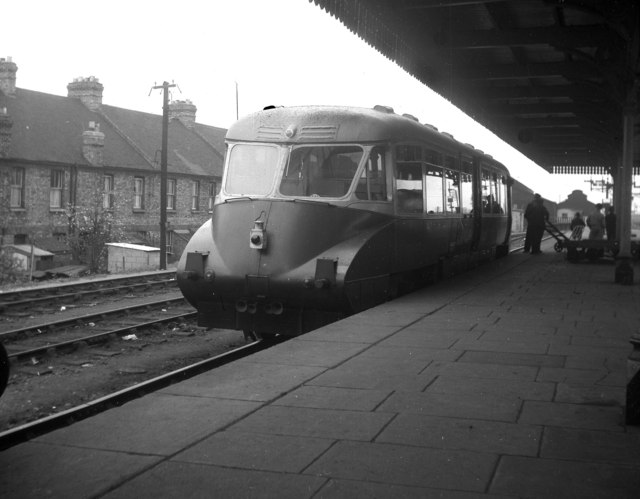 Then came a second batch: railcars no. 5-7. Their underframes were built at the same time as those for numbers 2 to 4, but as the Great Western were undecided as to the type of body numbers 5 to 7 should carry, they were not completed immediately. However, the contract for constructing the bodies went to the Gloucester Railway Carriage and Wagon Co. Ltd. who instigated several improvements to the original design. Sliding doors replaced the previous opening doors to increase accessibility in busy periods and deeper windows were installed to improve the view for passengers and increase the sliding ventilator window size. The front and rear of the railcar incorporated ventilation slots above the drivers windows together with subtle changes to the curves at the drivers compartment that slightly cleaned up the design. 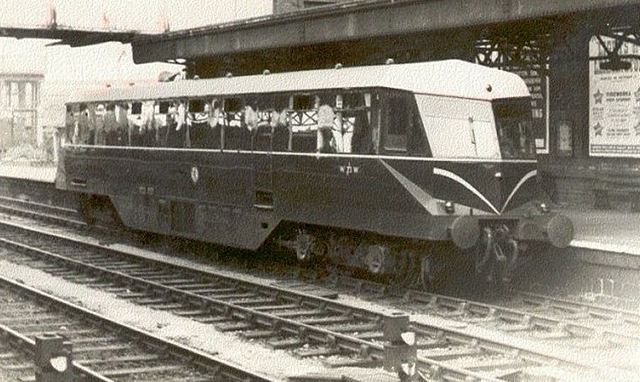 In February 1935, just prior of the delivery of numbers 5, 6 and 7 to the Great Western, an order was placed for a further 10 railcars of three designs. Numbers 8, 9 and 13 to 16 were to be of the same basic plan as the previous three models and having 70-seater bodies, numbers 10 to 12 had the installation of a lavatory with 63-seater bodies, while number 17 was designed as an express parcels car. Each of these examples used the 2 AEC 8.85 litre engines but with a gearbox fitted to each engine. 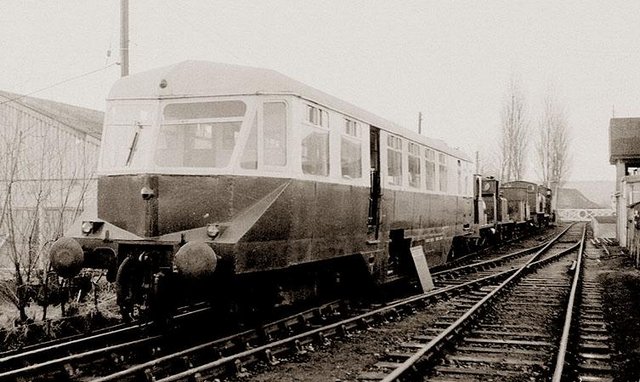 Later cars (from no. 8) had much more angular (and practical) bodywork, yet the "Banana" nickname persisted for these too. An odd feature of these units was the fitting of steam heating to them, which had the power to heat the railcar and another two to three coaches.
The GWR ordered this further batch of railcars in September 1938 but with the Great Western producing the underframes, bogies, brake gear and bodies and AEC supplying the engines and transmissions for construction at Swindon. This arrangement may have come about as AEC were supplying the British Army with trucks and artillery tractors during a time of hasty rearmament. Not all cars were alike as numbers 19 to 33 were intended for branch-line working, number 34 was to be a second express parcels car, while numbers 35 to 38 were designed as twin-sets with buffets and toilets for working the Birmingham to Cardiff service. Railcars 19-20 were fitted with a separate high-low ratio gearbox on the final drive side of the gearbox. Fitted with larger (9.25l) AEC diesel, they were generally slower than their predecessors, with top speed of 70 mph. 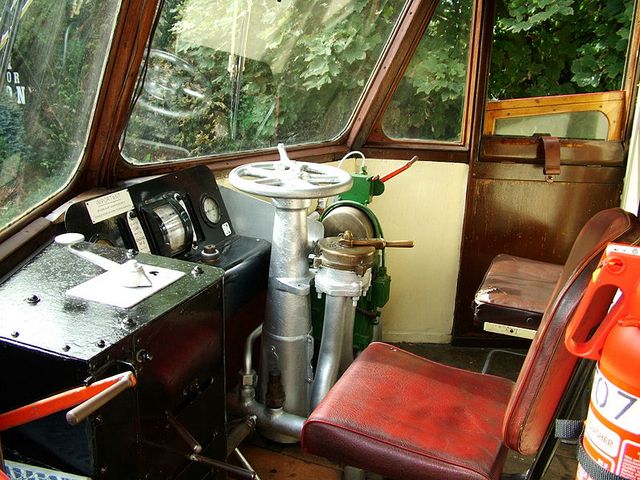 Railcar no. 34, mechanically identical to the other cars in this batch, was fitted out the same as the first express parcels car, number 17, except that access was provided by double-hinged doors instead of sliding doors. Operating from Southall, the cars trailer hauling capacity increased its usefulness over number 17. 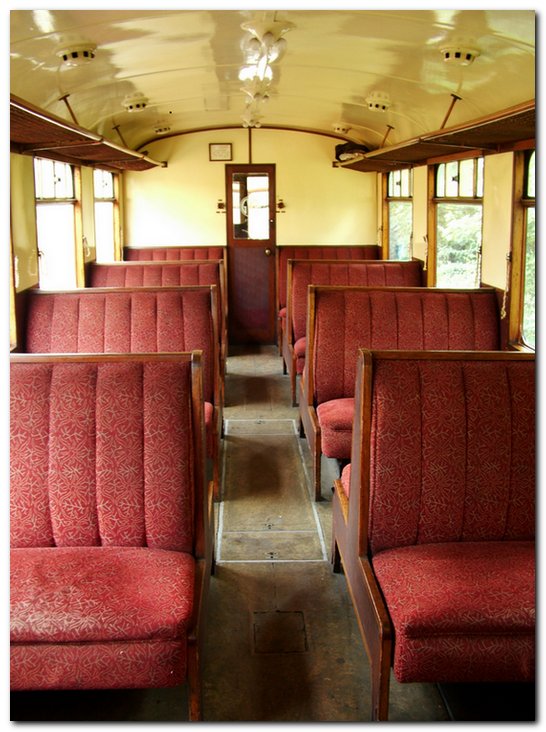 The final railcars of the Great Western series were operated as twin-coupled railcar units, the forerunner of today's diesel multiple units. With the driving compartments situated at the outer ends of the set, buffet and toilet facilities could be provided for 104 seated passengers.However, if a standard corridor coach was installed between the two cars, seating numbers could be increased to 184. 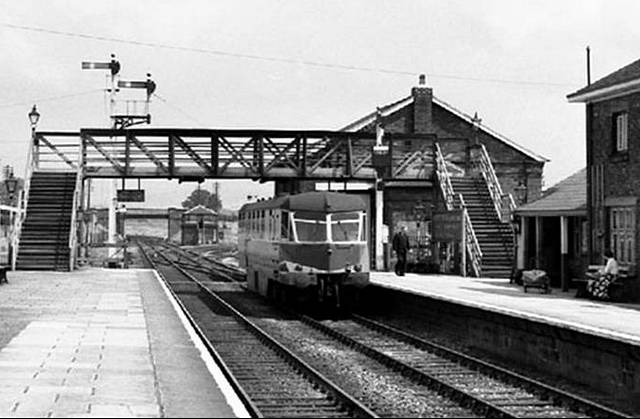 Twin sets were constructed at Swindon. The cars were identical in detail to the 19 - 33 series with the same AEC 6-cylinder engine of 105 bhp, giving a total of 420bhp per set. Introduced in November 1941, numbers 35 and 36 worked the Birmingham to Cardiff express service, but such was the demand for this working even with the additional coach, the railcars were replaced by steam-hauled trains except during mid-week. Numbers 37 and 38 arrived during February 1942, but number 37 was heavily damaged by fire on the 17th of February 1947, eventually being condemned on the 10th of September 1949. Railcar number 33 was therefore rebuilt in March 1954 with a single driving compartment for use with number 38. 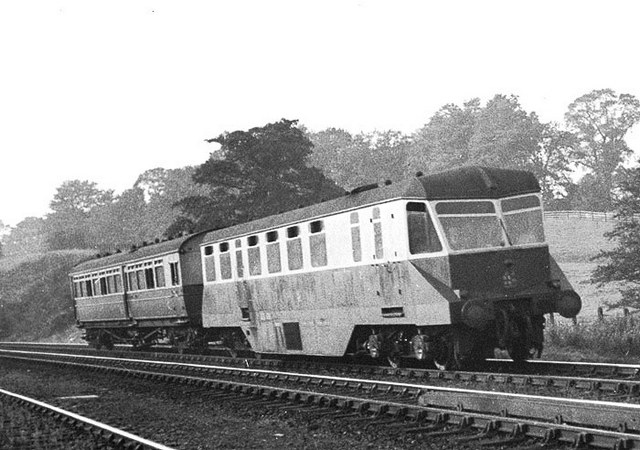 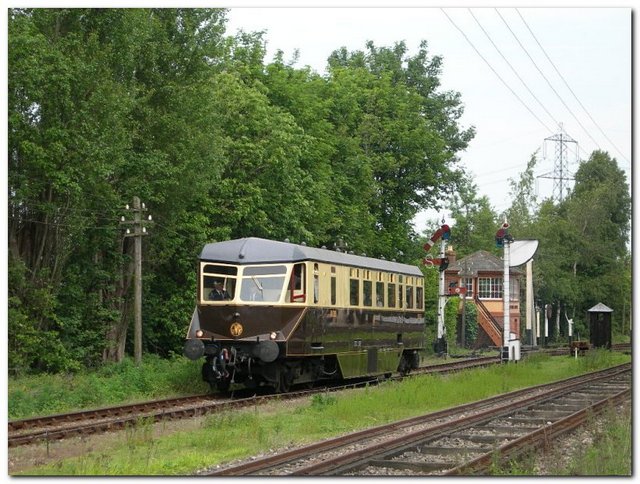 Text: the Great Western Archive with some minor additions from Wiki
Special thanks to Robert Darlaston 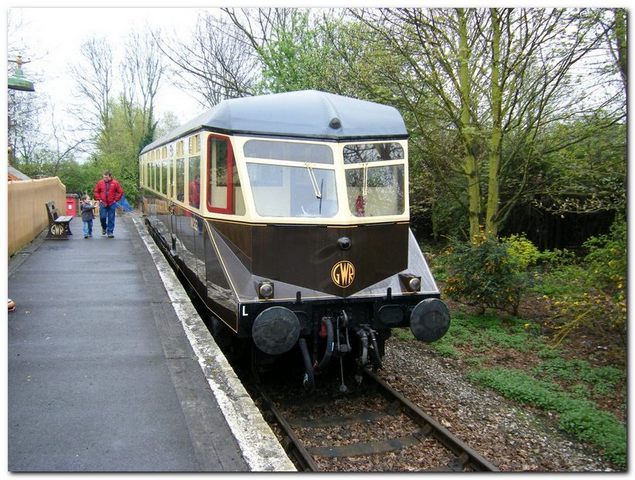 Comment by lord_k on October 10, 2010 at 11:11pm
It is one of the direct ancestors. I must admit that postwar British Rail diesel railcars were more advanced technically, but far less spectacular.

Comment by Larry on October 10, 2010 at 10:06pm
Talk about ahead of it's time. I can see the ancestor of the modern high speed rail train.