Mercury was the name used by the New York Central Railroad for a family of daytime streamliner passenger trains operating between midwestern cities. The Mercury train sets were designed by the noted industrial designer Henry Dreyfuss, and are considered a prime example of Art Deco design. The success of the Mercury led to Dreyfuss getting the commission for the 1938 redesign of the NYC's flagship, the 20th Century Limited, perhaps the most famous train in America. A fourth train, the James Whitcomb Riley between Chicago and Cincinnati, used the same design for its train sets and is considered part of the Mercury family, although it did not bear the Mercury name. The Riley debuted in 1941 and lasted into the Amtrak era, though no longer a streamliner. 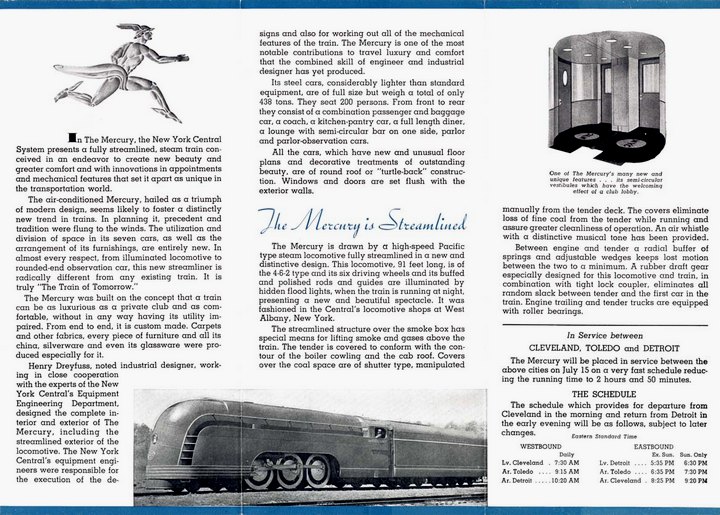 In the mid-1930s, the New York Central launched an experiment to enhance its passenger traffic in the midwest. The goal was a new streamlined service focusing on speed and innovation. "Mercury," the name of the Roman god of messengers, was chosen for its connotations of speed. The new train was marketed as the "Train of Tomorrow" (not to be confused with the General Motors concept train of the 1940s), reflecting the emphasis on innovation. 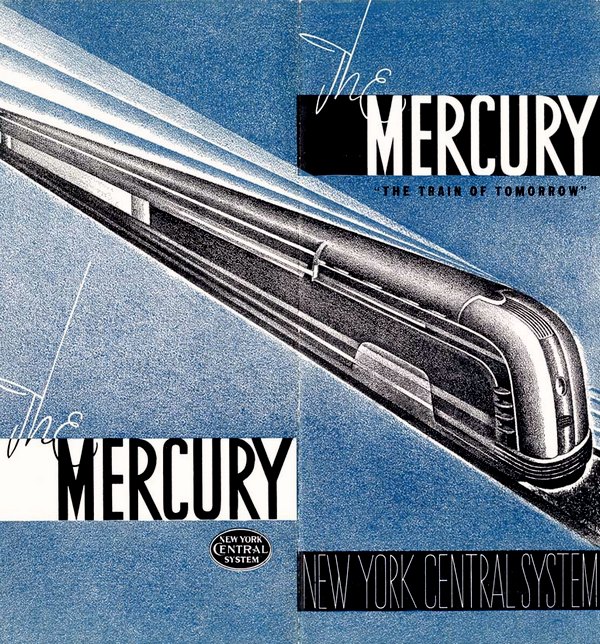 In 1934, Dreyfuss had gained attention for the New York Central with his streamlined design for the Commodore Vanderbilt locomotive. This was his first railroad design; he was best known for his work on consumer products like telephones, fountain pens and vacuum cleaners. In 1935, the Central asked him to take on the new project.

Here is his description of how the plan developed:

The final designs were approved ... but when they were put out for bid prices were so out of line that the project was canceled. It was a heavy blow when I received the bad news, for the trains had been a major effort for our office. I decided to take the rest of the day off, and I boarded a train for the country. En route, traveling the railroad yards of Mott Haven, I saw the answer. I got off the train, returned to New York and suggested [to the Central president] that some of the used cars in the yards might be converted. Out of them the successful Mercurys were built at one quarter of the original figure. The Mercurys have been called a turning point in railroad design. They were the first streamliners done as a unit, inside and out, integrating everything from locomotives to dinner china.

Of Dreyfuss's railroad designs, the locomotives got the most notice, so much so that his work on passenger cars is often overlooked entirely. For the Mercury, he achieved a streamlined appearance by covering the exterior pipes, whistles, and other fittings in a smooth "bathtub" cowl. The sides of the cowl were cut away to show the driving wheels.


"The ... drivers sported centers painted in aluminum with a black band separating the aluminum discs from the aluminum rim and tire. Dreyfuss had installed three 50-watt and two 15-watt lamps under the cowling on either side to illuminate the drivers and rods. The effect at night was most striking.

It has been said that, "As opposed to [some of his] contemporaries, Dreyfuss was not a stylist: he applied common sense and a scientific approach to design problems." However, it can be seen from his treatment of the driving wheels that Dreyfuss was not above paying close attention to merely stylistic, non-functional details.

The exterior of locomotive and cars was medium gray with brushed aluminum trim. On each side, the passenger cars displayed the Mercury logo in the form of a silver medallion, showing the god Mercury in traditional representation with winged cap and sandals. 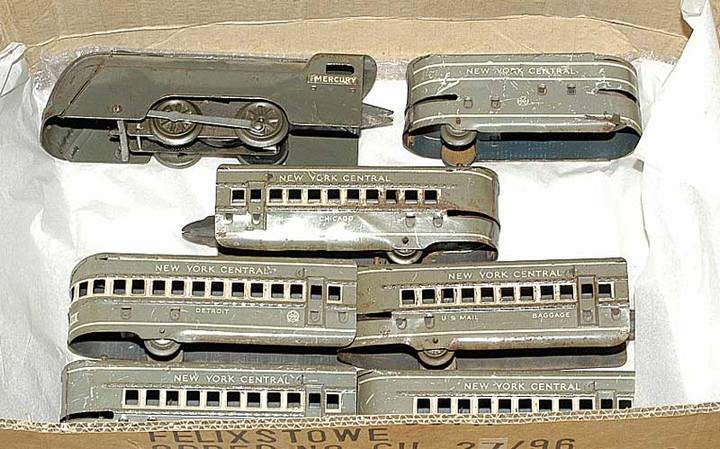 For the Mercury, Dreyfuss, approached the design of the train as an integrated whole, interior and exterior, from the locomotive to the rear observation car. His goal was to recreate the atmosphere of a private club. His primary concern toward that end was to mitigate the rigid uniformity and long, narrow form of the conventional railroad car.
Although each car was functionally separate, Dreyfuss's design minimized the divisions between cars. He did this partly by having interior sections that spanned car boundaries. For instance, the coach section comprised the rear of the first car, the whole of the second, and the forward part of the third. The kitchen was in the rear of the third, while the dining room was in the following car. 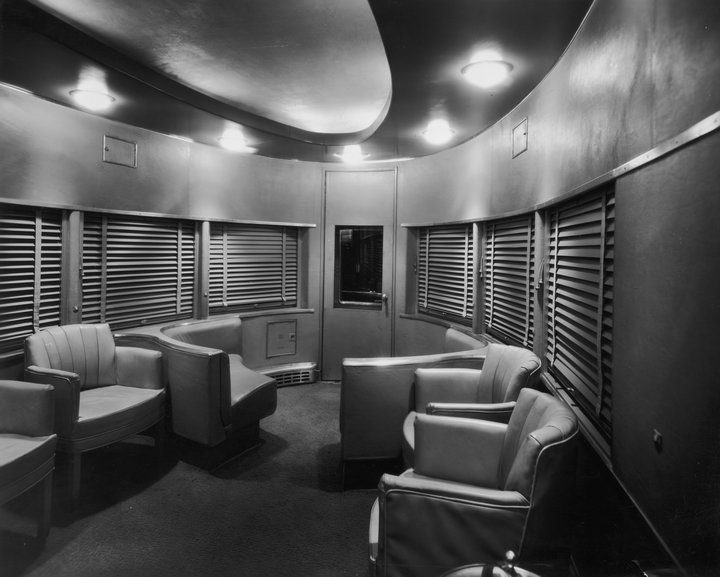 He also sought to integrate the cars by the design of the vestibules. He made each vestibule semi-circular and widened the passageway between cars to 1.60 meters (5 feet, 3 inches). The intended effect, when cars were coupled together, was of a single circular room, like a miniature rotunda. Within cars, Dreyfuss applied several techniques to break up the space and make it less linear. In the second car, for instance, he interrupted the rows of seating by placing two pairs of seats facing each other across the aisle in the middle of the coach section. Similarly, in the sixth, a parlor car, he broke the seating into two sections with a small private compartment, seating six, in between them. The dining room had three sections. Two of them were conventional seating, but the middle section was made up of tables for two people seated side-by-side, facing the center aisle. The dining car also had a small lounge section, seating six, for people waiting to be seated.

Dreyfuss also applied innovation to the round-ended observation car, a common amenity of premier trains of the time. To maximize the view, he lowered the sills in the observation area by 30 cm (12 inches), allowing 1.23 m (four foot) high windows. Instead of having the seating around the walls, facing in, he placed the seating in the center, facing out towards the windows. There were banquettes for three facing each side, and one for two facing the rear. In an extra touch, a speedometer was built into the center banquette, a reminder of how the Central was marketing speed with the Mercury.

Revenue service for the Cleveland Mercury began on July 15, 1936, following a publicity tour. It proved so popular that the Chicago Mercury was introduced in November 1939. Two train sets serviced these trains, but the schedule was such that one train set began the day in Cleveland, ran to Detroit as the Cleveland Mercury, and ran from Detroit to Chicago as the Chicago Mercury, while the other set did the reverse run (the eastbound Chicago Mercury arrived in Detroit after its westbound counterpart had left, so the NYC would have needed an extra train set, if it had not shared sets across trains). The Cleveland run was on a 2:50 hour schedule and the Chicago run took 4:45.
The James Whitcomb Riley was introduced on April 28, 1941, running between Cincinnati and Chicago on a 5:15 hour schedule. It was named after the popular poet because of his association with Indiana and Americana. The equipment was basically the same as the other Mercurys, although it was an all-coach train. The Cincinnati Mercury, running between Cincinnati and Detroit on a 6:30 schedule, followed the Riley into service. The Cincinnati Mercury was the first to fall as rail service contracted, ending in 1956. It was replaced by the light-weight Xplorer in a brief experiment. The Chicago Mercury was combined with the Wolverine in 1958. The Cleveland Mercury was discontinued on July 11, 1958. The Riley was retained, although it was no longer a streamliner. In 1971, Amtrak combined the Riley with the George Washington. The combined service was renamed the Cardinal in 1977, which is still running to this day.