Here is its story, told by Marty Bernard @ American-Rails.com.

The Gulf, Mobile & Ohio Railroad, famously known as The Rebel Route, gained its celebrated slogan from the small fleet of passenger trains known as Rebels, with the most famous of these trains called simply the Rebel. The GM&O is not well remembered for its passenger services, which is likely due to the fact that it bailed out of the Deep South passenger market in the 1950s due to stiff competition from the Illinois Central and Louisville & Nashville. However, its small fleet of Rebels made enough of an impression that they are still remembered by many in the railroading ranks and those who were lucky enough to ride aboard them.

Similar to the Chessie System in the east, the Gulf Mobile and Ohio of the Midwest and South was a short-lived railroad whose legend continues to live on today. The GM&O wasn’t created until the early days of diesel power and it was gone by the early 1970s. However, during its roughly 40 years of operation it was a fierce competitor and although always surrounded by giants it held its own in many of the markets it served, which is not surprising as the railroad is also known as The Rebel Route. 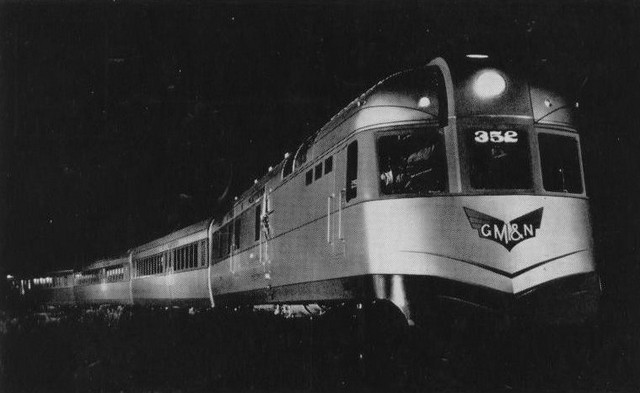 What became the classic Rebel passenger train actually has its beginnings dating back to GM&O predecessor, Gulf, Mobile & Northern which has the distinction of inaugurating the first southern streamliner, the Rebel in 1935. While this train may not be as well known as the Super Chief or Empire Builder it brought about two drastic upgrades to passenger rail operations. First, the original Rebel was a three-car streamlined “trainset,” similar to that of the Burlington’s famous Zephyr 9900. However, along with including more boxy streamlining than the Zephyr, the Rebel also had the ability to interchange or add cars (unlike the Zephyr and many other articulated, streamlined trainsets debuting around the country during that time which were rigid, semi-permanently coupled trains). The Rebel also featured on board hostesses, perhaps the very first train to introduce such services.

The original three-car Rebel streamliner was built by American Car & Foundry with the power car provided by the American Locomotive Company (Alco). While the train’s initial route connected Jackson, Tennessee, with either New Orleans or Mobile, Alabama (the train split at Union, Mississippi), in 1942 it was stretched to St. Louis after the merger between the M&O and GM&N, and the trainsets were pulled off line in favor of true, streamlined passenger equipment. The original Rebel could connect Jackson with New Orleans in just over fourteen hours while it reach Mobile in under thirteen hours. Both trips carried an average train speed of between 32 and 34 mph. Being an articulated trainset the consist was rather simple and included just a few cars; the shovelnose powered car with baggage compartment, coach/buffet, and lounge/sleeper observation. The train was also designed by famed industrial designer Otto Kuhler who helped improve the looks of numerous famous streamliners such as the Baltimore & Ohio's Royal Blue, Milwaukee Road's Hiawathas, and the Lehigh Valley's Black Diamond. The updated version of the Rebel (above) featured a beautiful livery of red and silver with power provided by GE-Alco in the way of a DL-series, slant-nosed diesel locomotive (similar in looks and length of an EMD E series model). When the GM&O merged with the Alton Railroad it ordered new, lightweight equipment and furthered its reach to both Chicago and St. Louis.

An article published in Jan. 1937 issue of the Railroad Stories magazine, with photographs by T.A. Gay, is brought to us by barndad (Classic Trains Magazine forum):

To many railroad men The Rebel is known as the world’s slowest Streamlined train – which is probably true, for she takes better than fourteen hours to cover the 488-mile run between Jackson Tenn., and New Orleans. But railroad men who know their stuff don’t allow such a statement to represent their serious opinion of the train. They understand that The Rebel may make as many as 55 stops in those 488 miles, and they realize also that this train is making passenger business pat under conditions which would have forced many a big and ”efficient” railroad to give up the game as not being worth the trouble.

The idea behind The Rebel dates back several years ago, when the management of the Gulf, Mobile & Northern decided that if it couldn’t make money hauling passengers in ordinary standard equipment at high rates, the only thing to do was to haul them in extraordinary equipment at lower rates. So management pulled off its steam passenger trains and adopted gas-electric motor cars that could be operated for 35 cents a mile; and when it discovered that people couldn’t afford to pay 3.6 cents a mile to ride in the day coaches, it took the lead in reducing fares to two cents.

Then, early in 1935, the G.M&N. officials looked around for new equipment to make the overnight run between Jackson and New Orleans. The result of that looking around was the streamlined Diesel-electric train now known as The Rebel, built by the American Car & Foundry Co. Unlike most streamlined units, especially those of the Diesel-electric’s variety, this train was not articulated, but consisted of two-trucked cars, which could be coupled into or uncoupled from the other cars at will. The reason for this divergence was based not so much on a distrust of articulation as on the fact that conditions under which the train was designed to be operated called for such construction.

Between Jackson, Tenn., and Jackson, Miss., only three cars are used – the motive-power unit, a day coach, and the combination sleeper and observation car. Early in the morning the southbound train picks up the extra day coach and carries it on to New Orleans and thus accommodates Mississippians who want to go to town for the day; coming back in the evening, it sets the car out again at Jackson. Thus each of the two trains consists of three cars, with the spare used jointly.

Accommodating nearly 100 people, the three-car train weighs about 364,000 pounds, of which 175,000 pounds is represented by the motive-power unit. With the fourth car attached, she weighs 95,000 pounds more and takes 71 more passengers. And while the ratio of weight of train to the weight of the locomotive does not show any great advantages over modern steam power, lower operating costs are calculated to more then offset the high initial cost.

More important than cost, however, is the problem of getting people to ride the rails again; and this The Rebel has done to the entire satisfaction of the men who conceived her. Since the nature of her service with its many stops precluded an average speed higher than that of a modern automobile, it was necessary to offer something a Southern traveler couldn’t get in his automobile or in a bus. That something was comfort and style.

Style was built into the train. The American Car & Foundry hired the noted streamline designer, Otto Kuhler, to design her exterior, and the result was the most modern-looking train in the country. A broad band of Chinese red envelops her at window level, and the roof and the rest of the sides are of aluminum color, with the skirting a darker gray. The anti-climbers, on what might be called the cow-catcher, form an integral part of the design, giving an appearance of swiftness. Even when the train is standing still she looks as though running a mile a minute. A corner of the Observation Coach

The interior is no less smart and modern, with individual chairs in the coaches, indirect lighting, built-in ashtrays, ivory and pastel tones, henna upholstery, and even re embossed antique leather in the “Jim Crow” section. Incidentally, space is saved by doing away with the usual vestibule at the end of each car, and instead, there is an entrance on the side.

With air-conditioning, scientifically designed seats, and the latest in sleeping accommodations, it’s hard to find any kind of passenger transport which can claim to be more comfortable the The Rebel. Her walls have been insulated, and her track have been cushioned in rubber, so that even the click of the widest rail joint is inaudible. But the most necessary part of all the comfort, especially to a Southerner, is service. To see to it that service was given; to make the casual traveler feel he was having the time of his life and to make the professional traveler feel that here was something different, the Gulf, Mobile & Northern hired five girls to act as hostesses.

These girls were the first ones ever to work aboard a train. Chosen for their ability to mix with people without making themselves nuisances, they have transformed the impersonal atmosphere of the old-time accommodation train into one of friendliness and cooperation. Like the Union Pacific after it, the G.M.&N. has discovered that people feel better, act better – never have the trains been so tidy! – and think better of the railroad because of these young ladies.

One of the hostesses retailed the first new railroad joke we’ve heard in years. It concerned the young Mississippian who, watching the Rebel whiz by in one of her speedy moments, said “That’s the first time I ever seen both ends of the train at the same time!” All of which sounds swell, you say, but why the name The Rebel? A lot of other people asked the same question, and some of them figuratively started to fight the War Between the States all over again when they heard of it. To them President I.B. Tigrett hastened to explain that the only rebellion implied was the revolution against traditional methods. “These two trains,” he declared, “will be called The Rebel, significant of our effort to conquer and improve conditions. We are hoping to have the general approval of the people in out territory.”

Well, if increased passenger revenues are an indication, his hope has been fulfilled.