We still have got a whole st(r)eamliner fleet at our shed. And today, after four diesels in a row, it's time to pay a tribute to the forgotten Seabord Air Line locos. The railroad's name is deceptive, suggesting aeroplanes, airports, etc. Actually, SAL had (almost) nothing to do with aviation, their name meaning the shortest distance between two points. When they tried to enter the air transport business in 1940 they were prohibited to do so for the sake of federal anti-trust policy.

Of all SAL trains, two earned all-American fame: Orange Blossom Special and  Silver Comet. Both were hauled by GE diesel-electric streamliners. Much less is known about SAL Class P steam engines. Built since 1911, they were definitely not the last word of technology in 1930s. Some were streamlined, but an elegant Commodore Vanderbilt-like shrouding didn't make them famous.

The caption for this photo from my Flickr friend  TPavluvcik's collection reads: "... a SAL passenger train, led by one of the streamlined 4-6-2 class P steam locomotives, waiting to depart the downtown St. Petersburg depot next to Webb's City in December of 1941. These locomotives hauled passenger trains between Wildwood, Florida and St. Petersburg. At Wildwood, northbound cars were combined with a Miami section to continue the journey to New York City, and southbound cars were retrieved to continue their journey to St. Petersburg. This is almost certainly a G.W. Pettengill, Jr. image. "

TPavluvcik also invites to take a look at a non-streamlined Class P2 locomotive photographed in the late 1930s next to the Webb's drug store in St. Petersburg:

The Class P specs (incl. two sub-classes), brought to us by Steve Llanso, are published on steamlocomotive.com. Oddly enough, this otherwise excellent source doesn't list SAL P's on its streamliners roster. Unfortunately, I could not find when exactly the three locos (of 25 total) underwent the fashionable transformation.

Speaking about obscurity: the P's are easy to overlook but there's something even easier. If I knew about Seaboard Air Line streamliners since 2007 (thanks to ever-useful Skyrocket webpage), this diminutive version of the Burlington Zephyr came as a complete surprise: 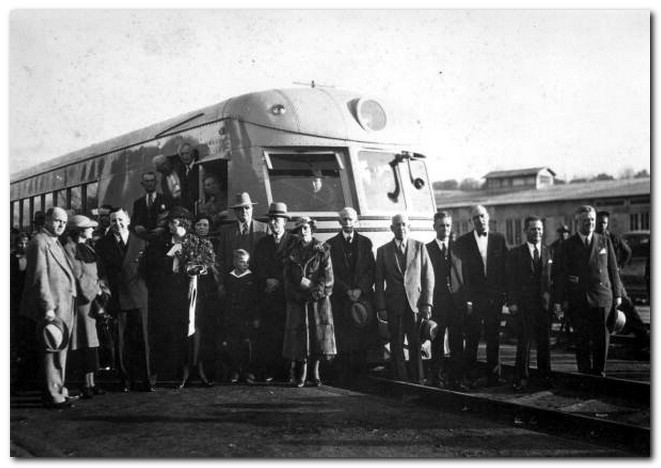 Only yesterday, hungry for extra info, I came across a photograph of the Tallahassee Flyer, a streamline doodlebug (i.e. a railcar powered by an automotive petrol engine) used by SAL since 1936. Its service span was short and ended in 1940 after a tragic accident. You can read about it here.

Back to Class P. One more photo from TPavluvcik's photostream:

Another streamline Pacific, photographed in 1943 near Webb's City. And another quote: "By 1943, when Seaboard streamlined Pacific locomotives stopped between St. Petersburg’s SAL depot and the Webb’s City drug store building, the War had suspended tourist travel to Florida. The area was transformed by numerous military training camps, and the trains were busy carrying thousands of soldiers to and from the city. "

We know that the last SAL Pacific was phased out of service in 1951. Was it streamlined? Or maybe the three Seaboard locos were stripped of their beautiful shroudings in 1940s? Hope to find answers soon.

great story. It is to bad that the rail system is faded in the U.S.A.