You don't have to guess the make - it's THE Royal Hudson, Canadian Pacific Class H1d #2850. A semi-streamliner, like a lot of its contemporaries used by the same railway.  And before we see it again, let's take a quick look at some slightly earlier (and probably more stylish) CPR steam engines - the two Jubilee classes. 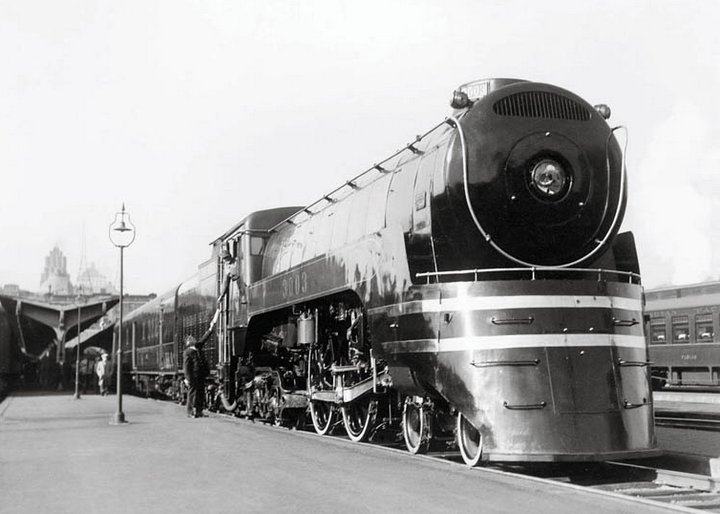 Named for the Jubilee (50th. anniversary) of transcontinental passenger service this wheel arrangement was quite rare the CPR being the only railway in Canada to have it. The CPR used them on light, fast passenger trains, branchline passenger and freight trains across the system. 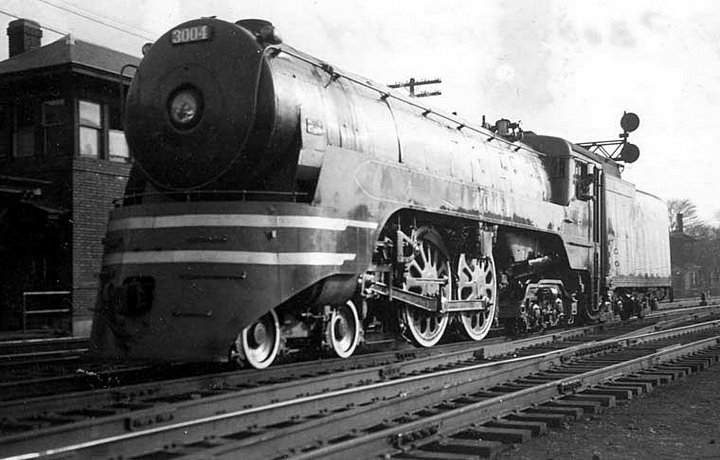 The earlier Jubilees were the famed F2 class 3000's that hauled lightweight passenger equipment newly designed and built to modernize service. There were only five of these stoker-equipped engines with 80 inch diameter drivers and 300 pounds per square inch boiler pressure. Top speed: 112½ mph! 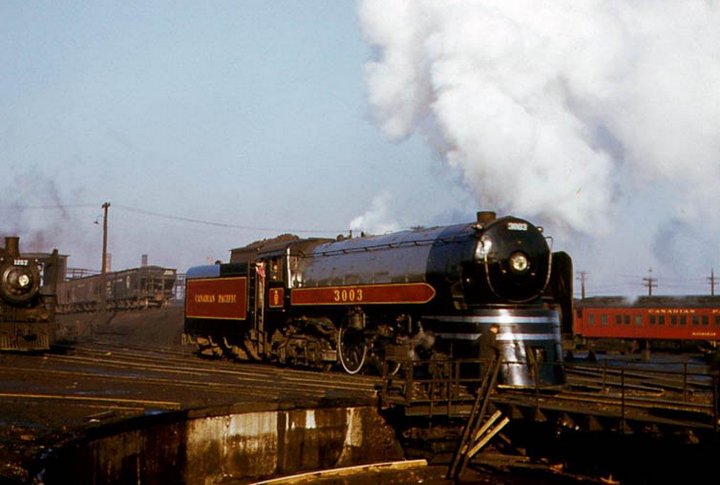 Two were assigned to Montreal-Quebec City service, two more to Toronto-Windsor and a single one (3001), oil-fired, to Calgary-Edmonton. These were true high-speed mainline engines while the 20 newer F2 class 2910-2929 were mostly hand-fired coal burners (except 2915 and 2918 oil-fired) with 75' drivers meant for light dual service. 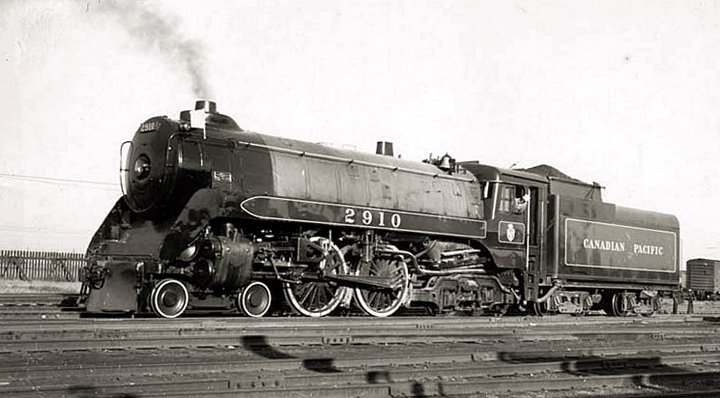 Curiously, the F1a class was the second to be built, coming from Canadian Locomotive Company in 1936-37. Eventually assigned to local passenger service, the F1s had 75-inch drivers and 16½x28-inch cylinders and a boiler pressure of 300 pounds per square inch. With these dimensions they exerted about 25,900 pounds of tractive force.

Weighing 218,000 pounds, they had a grate area of 45 square feet, an evaporative heating surface of 2291 square feet, and 900 square feet of superheater surface. They were semi-streamlined in the fashion of the earlier F2s and the CPR's Royal Hudsons, delivered in 1937. 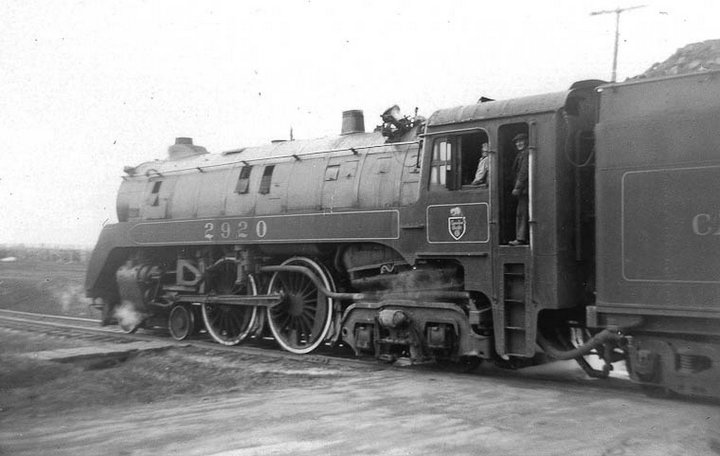 Although the tractive effort of the F2 class was less than that of the F1, their 70-square-foot grate area was larger and their longer boilers provided 124% more heating surface and 122% more superheater surface. These steam-producing features would have given them a higher horsepower at speed. 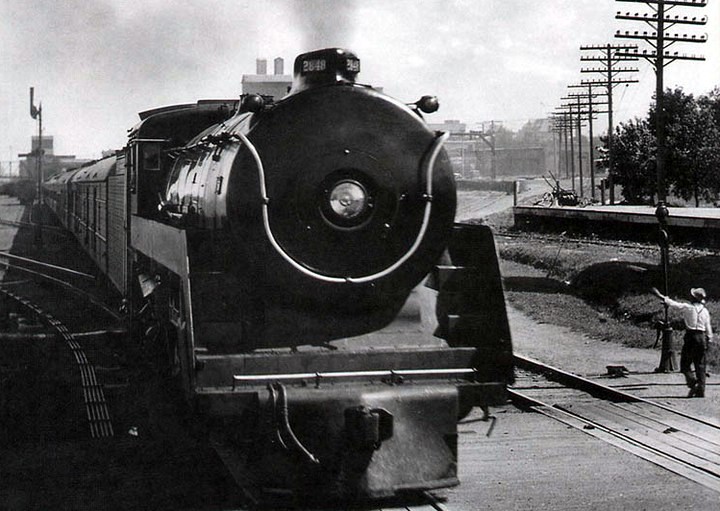 Now to the Royal Hudsons. The Canadian Pacific Railway ordered 20 of the 4-6-4 (Hudson) locomotives from the Montreal Locomotive Works (which was part of the American Locomotive Company) in the late 1920s. The design goal for these new locomotives was to improve on the Class G3 4-6-2s that were the top motive power for the CPR. A 23% larger fire grate and a boiler with a large superheater and combustion chamber were made possible because of the 4-6-4 wheel arrangement. The CPR bought these locomotives in two orders. 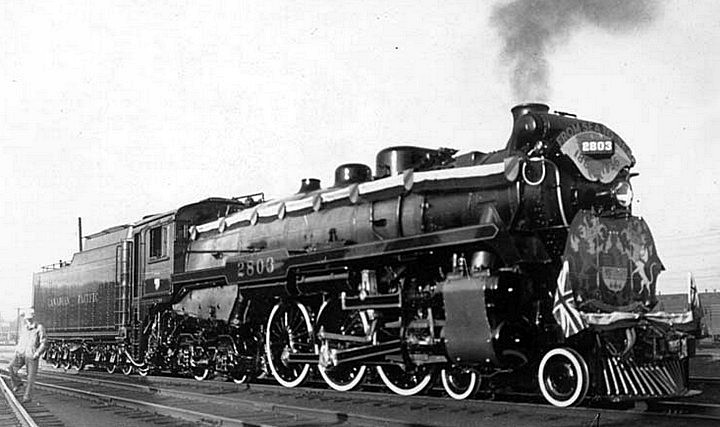 The first order for 10, Class H-1a, (road numbers 2800 through 2809, #2803 seen above all dressed up for the Transcontinental Service Jubilee, 1936), was delivered in 1929, and the second order for 10, Class H-1b (road numbers 2810 through 2819), was delivered in 1930. The introduction of the Hudsons improved running times and reduced the number of locomotive changes needed to cross Canada from fourteen to nine. 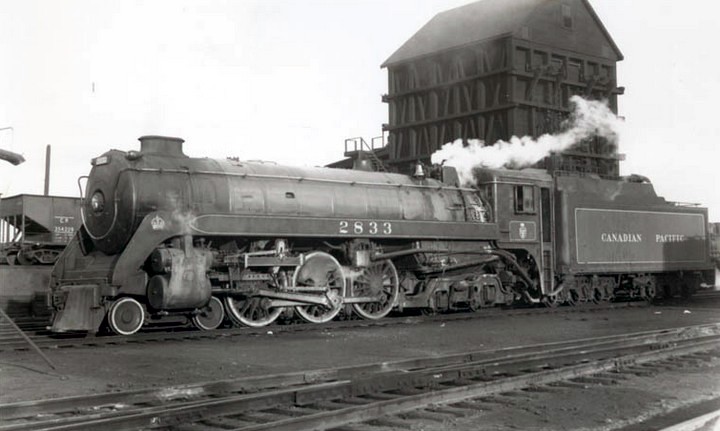 In the late 1930s the CPR, having concluded that streamlined shrouds were not cost effective, decided that there was value in an aesthetically pleasing locomotive and ordered more Hudsons designed to have softer lines and styled with an outstanding color livery. The first 30, Class H-1c (road numbers 2820 through 2849, above), arrived in 1937 and in 1938 another 10, Class H-1d (road numbers 2850 through 2859, below) were delivered. 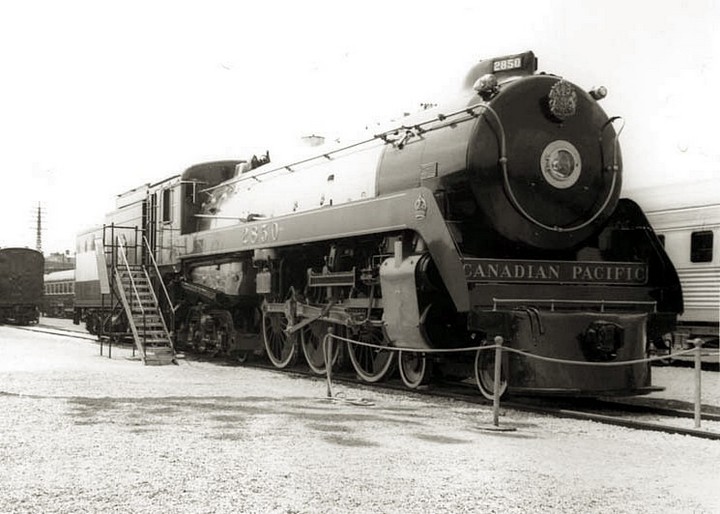 In 1939, King George VI and Queen Elizabeth toured Canada by train from Quebec to Vancouver. They used a CPR train pulled by one the very new Hudsons, number 2850. This locomotive, as well as number 2851 which led a pilot train that proceeded the "Royal" train by one hour, were specifically painted for this assignment. The special livery included Royal blue and silver paint, stainless steel boiler cladding and the royal arms painted on the tender. Also a crown was painted on the skirt just ahead of the cylinders. After the tour, both of the locomotives used were returned to the standard livery. Later the CPR was granted special permission to use the crown on the running boards of its newer Hudsons (road numbers 2820 through 2864) and to designate them as "Royal" Hudsons. This was the first, and last time a locomotive outside of the United Kingdom was given royal status by the reigning monarch. The fifth and final order for five Class H-1e (road number 2860 through 2864, below), were similar in appearance but, because they were destined for operation in the far west, were built to burn oil and were delivered in 1940. By 1960, all of the 20 Hudsons and 45 Royal Hudsons had been retired due to having been completely replaced by diesel locomotives. Finally, there were semi-streamlined Selkirks of the 2-10-4 wheel arrangement. The first of these large engines, which had a 2-10-4 wheel arrangement, was built in July 1929. Altogether, twenty were constructed before the end of this year bearing numbers 5900 to 5919. The Canadian Pacific Railway's classification was T1a. These locomotives weighed 375 short tons (340 t) fully loaded. They were the largest and most powerful non-articulated locomotives in the British Empire. The class was named after the Selkirk range of mountains that they crossed, the (railway) summit of which was located just inside the western portal of the Connaught Tunnel beneath Rogers Pass. 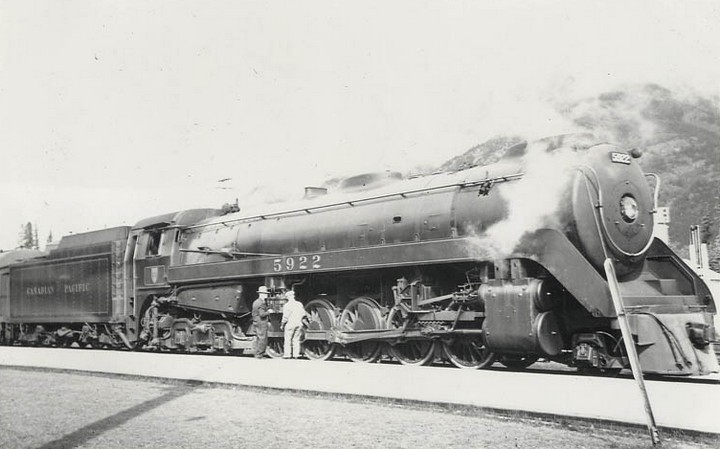 Montreal Locomotive Works built another ten of these successful mountain locomotives during November and December 1938. The Canadian Pacific Railway assigned them T1b class. They were numbered from 5920 to 5929. Modifications led the T1b to be ten tons or tonnes lighter while increasing steam pressure from 275 to 285 pounds per square inch (1.90 to 1.97 MPa). A further six Selkirks, classed T1c, were built by the Montreal Locomotive Works shop in 1949. They were the last standard gauge steam locomotives built in Canada for a Canadian railroad. They were much the same as the T1b except for a few refinements, including two cross-compound air compressors to speed recharging of the air brake system. Some small streamlining "touches" were not retained.  They were all equipped with boosters (some shortly after being built) and all Selkirks (5900 through 5935) were built as oil burners.

The last Selkirks (5930 through 5935) were taken out of service in 1959. All but two of this (T1c) class were scrapped. None of the earlier T1a class or T1b class locomotives was preserved.

Here they are: Jubilee F2, Royal Hudson and Selkirk.

And another Peter Ewart classic featuring a T1b Selkirk (1947): Stop. Just a moment! There is another Royal Hudson, photographed by no other than Jesse aka Justacarguy:

The photo is published together with some fantastic shots of a 1912 Pullman private railcar. No streamline there, but what an eyetreat! Click and have fun.

The "high style" of rail travel once meant that even the locomotives were stylish!

I believe the "homeland Brits" could be a fair competition - don't forget that all LNER steam engines were thoroughly tested in France and LMS streamliner performed pretty well on its North American journey. And, of course, there was (and is!) the Flying Scotsman - once the world's fastest, it crossed some real distances, in Australia for example.

Interesting to see what the Brits come up with when they have to cross REAL distances.