It comes as something of a surprise to many people to discover that in the early 1940s Iraq State Railways were in the forefront of design so far as the steam locomotive is concerned. In 1940 Iraq State Railways completed the Baghdad Railway between Baghdad and Tel Kotchek on the border with Syria. This enabled the Taurus express to be introduced between Baghdad and Istanbul, Turkey, and for running this train a number of streamlined locomotives were ordered from Robert Stephenson & Hawthorns Ltd (RSH). These were the PC Class Pacific locomotives. RSH streamlined the PC class to resemble British express locos, with a nose rounded like the LMS Coronation Class and valancing styled like the LNER Class A4. However, whereas the LMS and LNER classes had 6-foot-8-inch (2,032 mm) or 6-foot-9-inch (2,057 mm) driving wheels, the PC class had 5-foot-9-inch (1,753 mm) driving wheels: a size akin to those on mixed traffic locomotives in Great Britain.

They were particularly noteworthy for their excellent double-bogie tenders with cabs: a refinement that the tenders of LMS and LNER streamliners lacked.

No. 502 Mosul, was delivered in March 1941, but after the Iraqi government allied with Nazi Germany the delivery of the rest was delayed until after the British invasion of Iraq in May 1941. No. 501 Baghdad was delivered in October 1941, and No. 503 El Basra in December 1941. No. 504 Kirkuk was sunk en route by enemy action off the British coast and never reached Iraq. The "PC' Class were painted spring green lined out in white. 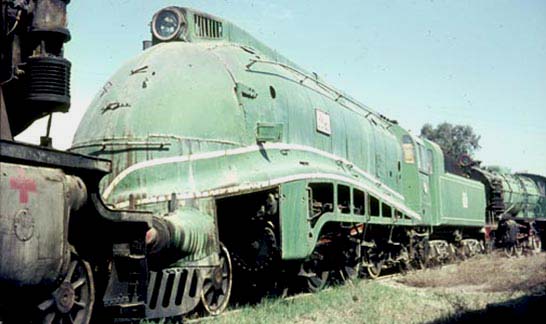 From 1961 onwards diesel locomotives were introduced on standard gauge lines in Iraq and steam locomotives including the PC class were withdrawn. In March 1967 locomotives 1501, 1502 and 1503 were disused, stored at Shalchiyah railway works and awaiting disposal. 1501 Baghdad and 1502 Mosul (above and below) were intact and 1503 El Basra was partly dismantled. England and has left its mark here)))