The German people, including Adolph Hitler, are not known as a people having a sense of humor. There were jokes about Der Fueher told in secret by the Germans(1) knowing that if the Secret Police, the Hitler Youth, or members of the Nazi party overheard them, the teller would disappear forever. People knew you did not joke or make fun of Hitler. He was known to fly into a rabid range when he heard of anything that would shed a bad light on his dogma or his person. His retribution was swift and lethal. Exterminating you wasn"t enough; he would erase your history. When WWI ended, corporal Hitler began his career as the architect of the Third Reich. He planed out each detail in minute detail. In searching for the ideal military dog he looked to the Bouvier des Flandres, used with great success by the French Army and police services. This would be the official guard dog of the Third Reich.

The Bouvier is a powerfully built compact rough coated dog of rugged appearance. It gives the impression of size and strength without clumsiness or heaviness. Perhaps its most notable feature is its impressive head which is accentuated by a heavy beard and mustache. It is a huge dog weighing up to 128 pounds and has jaws of steel. It is smarter, faster, and far more ferocious than the Alsatian Shepherd (Deutscher Schäferhund or German Shepherd), the Rottweiler, or the Doberman pincer. Despite its size the Bouvier is easily controlled and is a superior herd dog or just a family pet. During war against France, comrades of Corp.Hitler , reported a dogfight between a Bouvier and two  dobermans. The Dobermans did not know how huge the Bouvier was. The result was they charged and the big dog held his ground like a wolf that is self sufficient. When they got close, the Bouvier snarled and both German dogs stopped in their tracks, rolled over on their backs, and whined as they bared their throats in submission.

Corporal Hitler got himself a demonstration of the dog's abilities at a French military dog training camp where he witnessed the  superiority the Bouvier. After an awesome demonstration of strength and dexterity, Hitler went over the dog and offered it his hand. The dog approached him, sniffed at his crotch, and apparently did not like what he was smelling. Without warning, the dog bit off Hitler's left testicle. 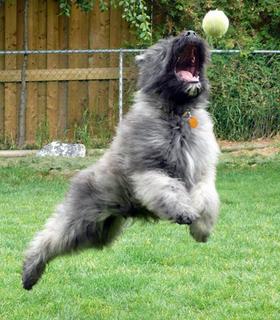 Hitler never forgot the incident(who would?) and when Germany invaded France in WWII, he ordered the extermination of the breed worldwide. Fortunately he was unsuccessful. (This story comes from W.E.B. Griffin, author and historian.)

British intelligence discovered that Hitler was monorchic(had one ball) and wrote a song in an attempt to drive him even further round the bend than he was already, with some elaborate theories about how they might have discovered this.

"Hitler has only got one ball,

Göring has two but very small,

But poor Goebbels has no balls at all."

According to Wiki.answers.com this story is only partially true:

"Legend has it that Adolf Hitler had heard of the Bouvier des Flandres and was considering it as the official guard dog of the Third Reich. When a Bouvier was brought to him, it promptly bit his hand. Hitler then ordered that all Bouviers in Europe be killed, leading to the second near-extinction of the breed in Europe." 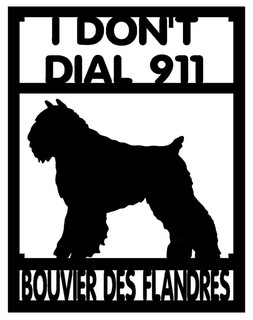 "Did you know that Hitler can not tie his own shoes? Ja, every time he tries his laces end up in little knotsies!")

Afterthought someone should pursue: There was a duck that got in Der Fueher's Face.

Sorry, this picture is copyright, but if you go to Wikipedia,...