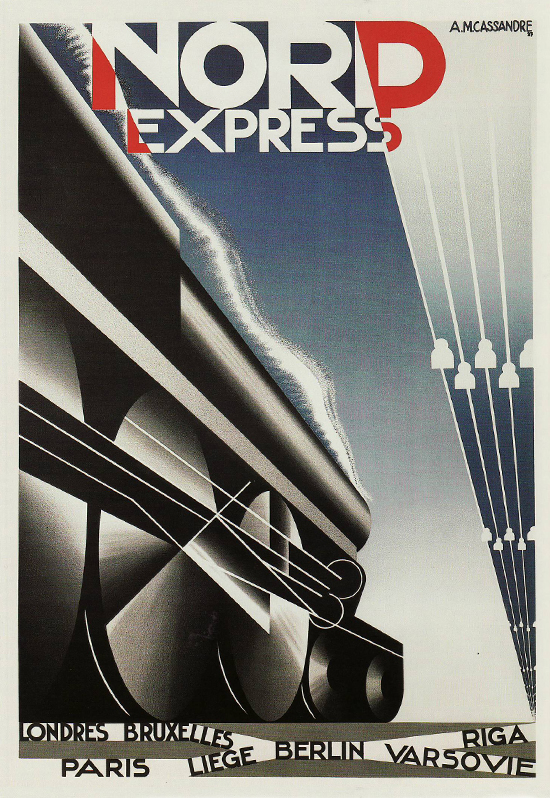 Cassandre is Dieselpunk. Just start to explore the Interbellum, and you'll be immediately welcomed by his travel posters. Just start to search an appropriate font for your latest Dieselpunk artwork, and you'll come across his typefaces. You may never heard of Adolphe Jean Marie Mouron aka Cassandre but you certainly recognize his style. And if his name doesn't seem familiar you'll be amazed to learn what a variety of 1920s and 1930s visual symbols is created by one (and only!) artist. In 1923, a Parisian hurrying by the poster-appliquéd walls and hoardings of his city might have had his eye drawn to a large horizontal poster. The central image was dramatically simple: a starkly drawn, well-muscled black figure posed against a radiant yellow background holds a woodsman's axe upraised to the full length of his rippling arms. The spectator awaits the woodcutter's coup de grace to a tree held by its final fibre to a well-hewed stump.

Given its strongly allegorical tone, the poster might have been taken as an exhortation by one of the revolutionary organizations of the time urging the French proletariat to fell a symbolic class foe. In point of fact, the poster's message was considerably less inflammatory. For just below the Herculean woodsman, the angular, decorative lettering informed the viewing public that the blow to be struck was a no-nonsense advertisement for Au Bucheron (The Woodcutter), a prominent Parisian furniture store. Forthrightly—even clumsily—lettered at the lower left of the poster was the name of Adolphe Mouron Cassandre, a young artist-designer making his first appearance among a select and aesthetically tired community of poster designers. The leap from the Bucheron poster in 1923 to the succeeding one for Pi Volo aperitif embraced a quantum jump. This poster, with its fusion of bird, glass, light and dark forms and its art deco lettering, demonstrates that Cassandre had assimilated the revolutionary ideas of shape and interpenetration of form developed in the cubist and abstract paintings of Gris, Braque, and Picasso. 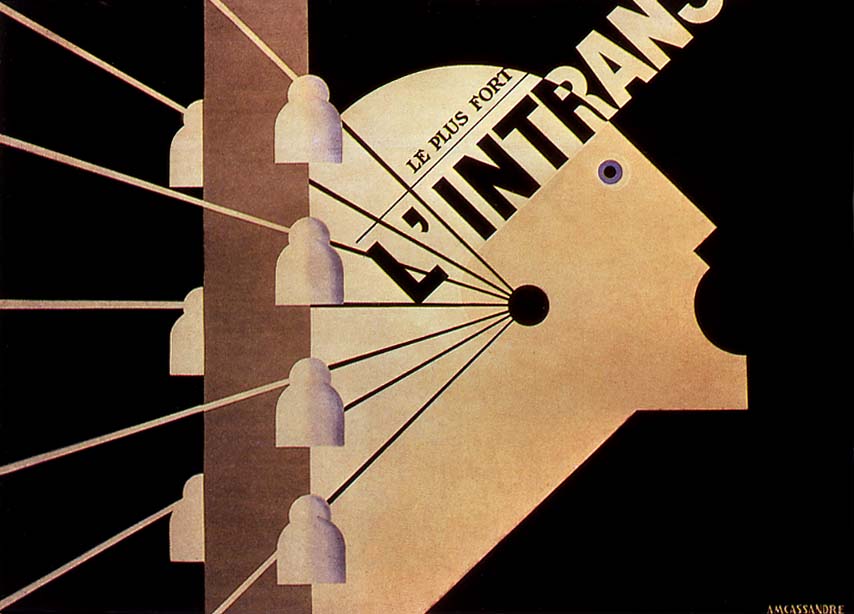 Barely a year later came the immortal “L'lntransigeant” truck poster. The forceful head and radiating telephonic lines of its composition created an indestructible image, and who today would be daring enough to truncate the product's name as Cassandre did in 1924? 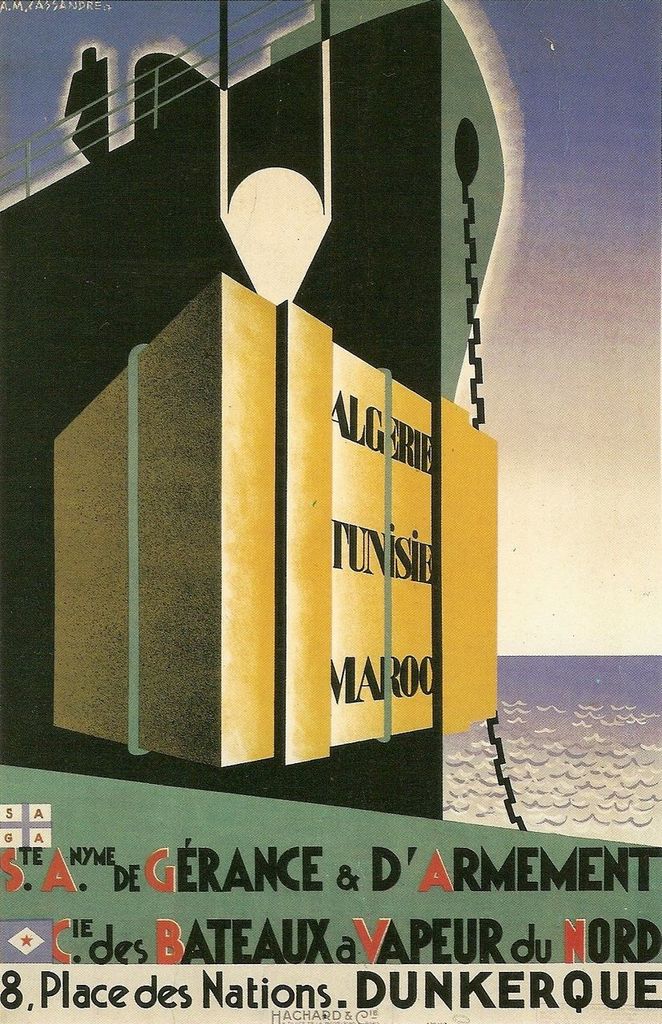 In each succeeding year, Cassandre's posters show an increasing innovation enhanced by breathtaking execution. Images so seemingly literal and so directly rendered took on a new dimension. A shipping poster (1927) depicted cargo being hoisted. 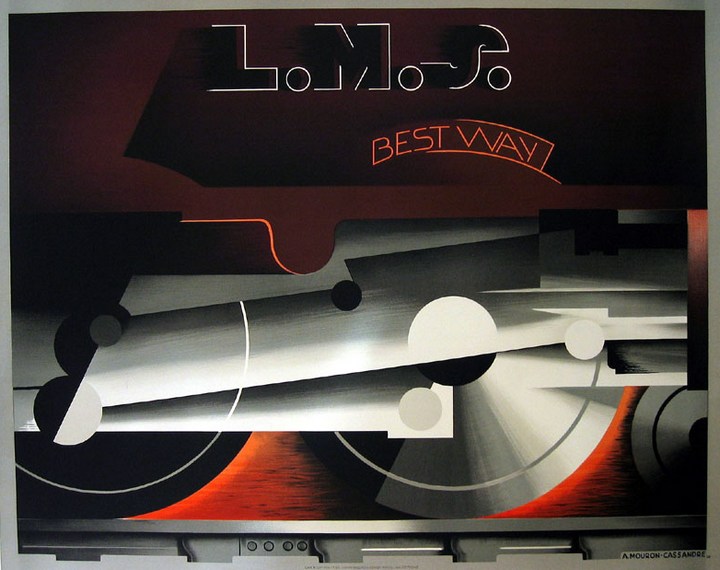 Railway posters conveyed the essence of locomotion and the rectilinear purity of tracks. The magic of these posters lay in their bigger-than-life imagery and Cassandre's extraordinary sense of the dramatic. Every poster bore an invention in letterforms, fashioned as an integral part yet providing a visual bonus—lyrical, playful, geometric or decorative, and above all never banal. Perhaps in the Cassandre “symbology” it was the fusion of puritan and thinker that was preeminent, and in the memorable railway documents, the engineer heightened the alchemy. Who can forget the exquisite distillation of the “Étoile Du Nord” poster, in which the velocity of the northern express is vivified by the acute perspective of pristine tracks culminating in a white star—an image that leaves us listening for the haunting sound of the train's whistle. 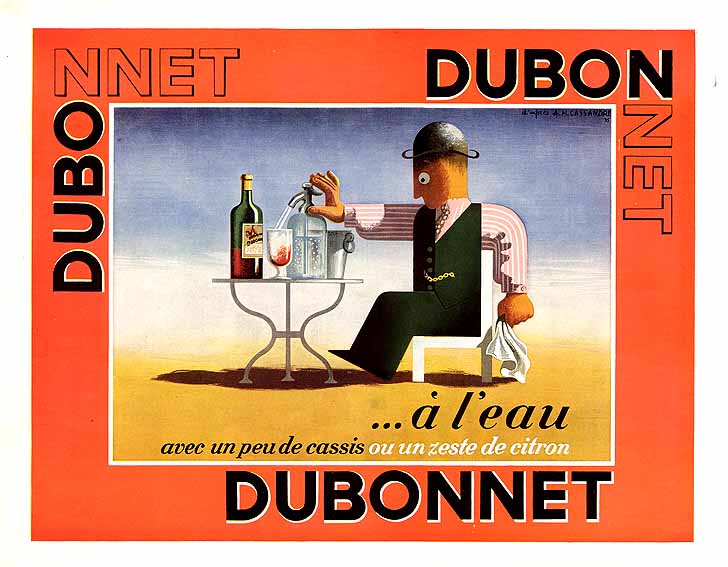 Like Chaplin's “Little Tramp,” Cassandre's “Dubonnet Man,” for all its stripped down formalization, has given us one of the ever-ingratiating figures of modern poster iconography.

At the same time, while designing his posters, Cassandre had begun to design several avant-garde type faces. The first of these faces, Bifur (above), appeared in 1929, a shimmering combination of solid forms and fine parallel lines whose art deco quality fits much of the design spirit of our time.

Acier (above) followed in 1930, and seven years later his most prestigious typeface, Peignot, appeared, dedicated to Charles Peignot, his friend, colleague and patron. Its jaunty asymmetry and unorthodox ascenders bespoke a pre-war elegance that could only be French. 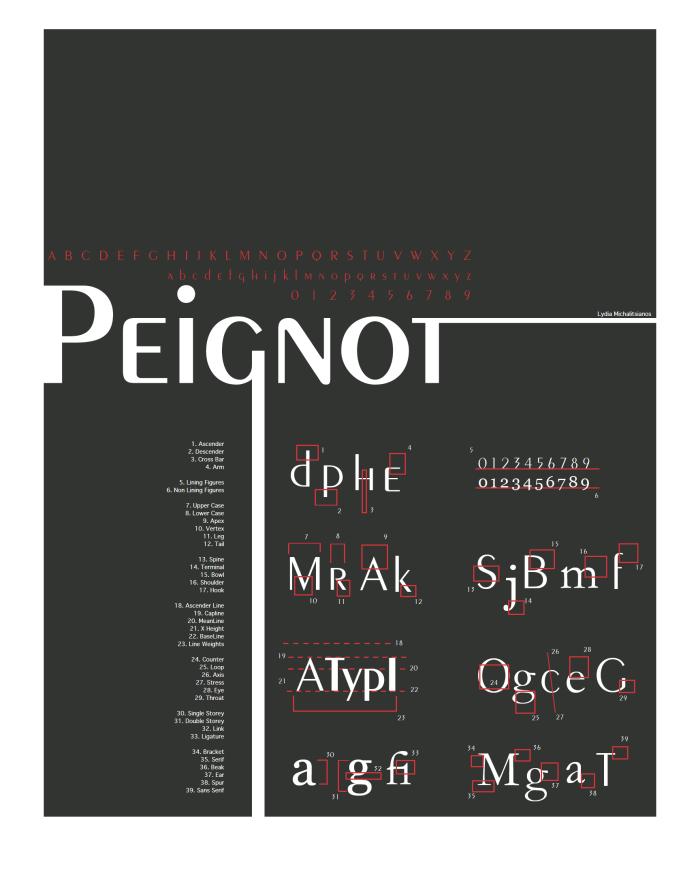 A tribute to Peignot by Lydia Michalitsianos

If there is a continuum in Cassandre's work, it lies in his command of the full spectrum of visual styles. Cassandre, from 1923 to 1939, was a bridge between the modern fine arts and their contemporary application. His pictorial approach embraced all styles, ever discriminating that it was the spirit he consumed and not the corpus. The filtering force was Cassandre's extraordinary intellect, the inordinate appropriateness and selectivity of his personal vision. ... Enough with quotes. Hope you'll read the whole article. I just want to add a few notes - for instance, to mention Cassandre's designs for the Container Corporation of America, made after WWII. His pre-war American commissions are better known, like Surrealist Harper's Bazaar covers: 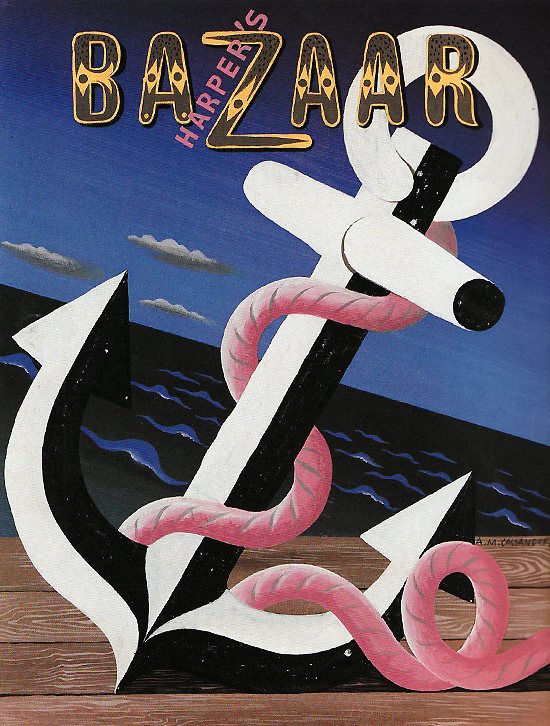 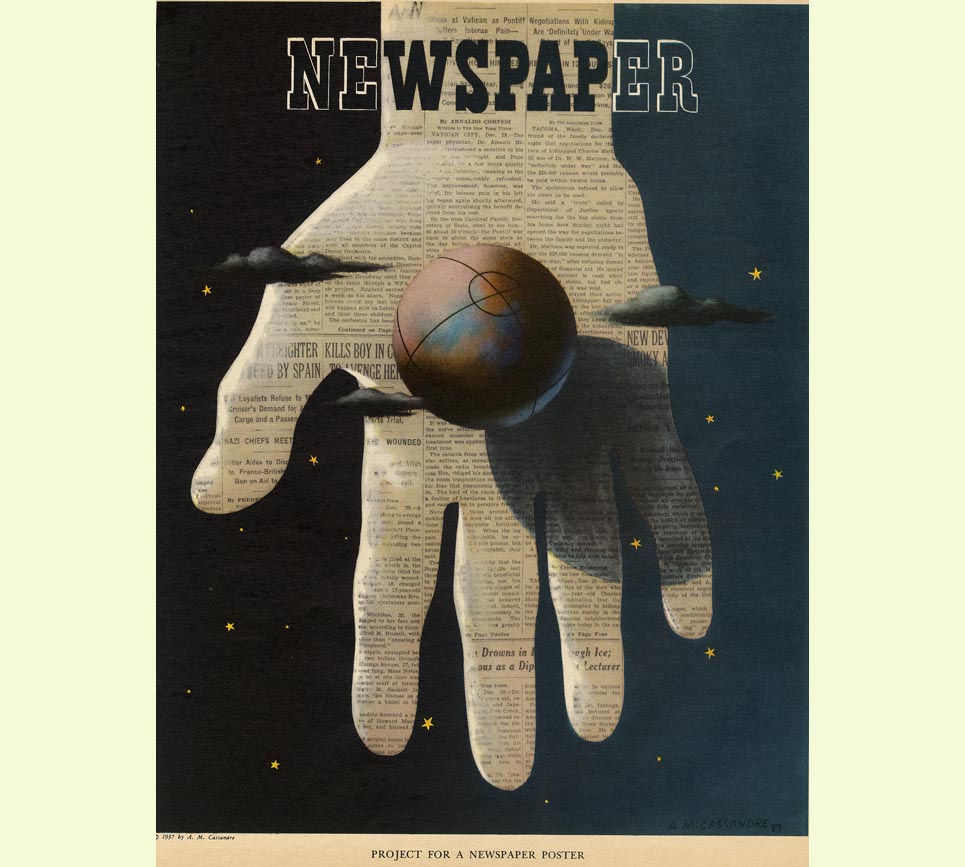 One of his post-war creations is familiar even to illiterate all over the world: it's Yves Saint-Laurent logotype created in 1963: 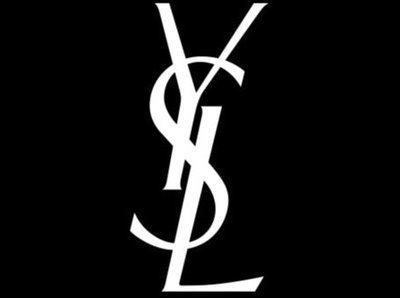 And my personal favorite is this 1930s poster: 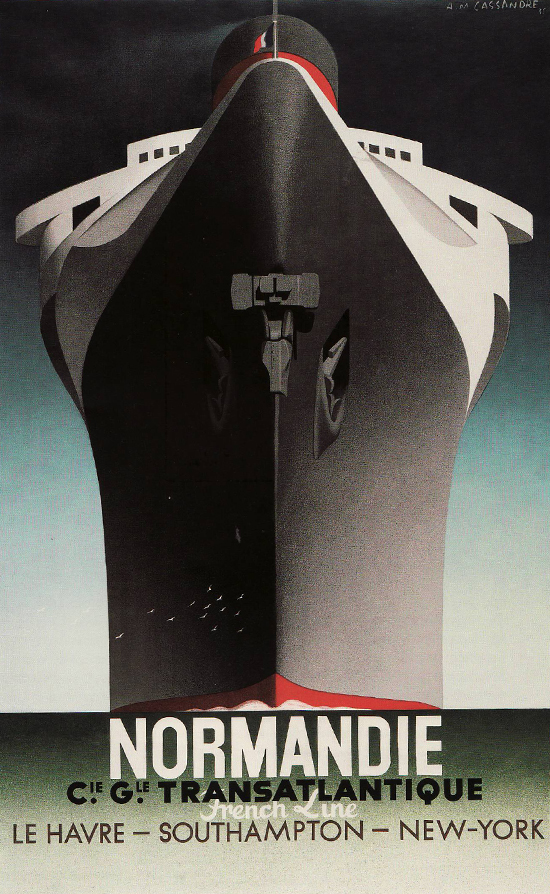 There are 68 images in the album. Browse it - or enjoy the slideshow.

My pleasure, Stefan. Of course I know the story and the gimmick. I wanted to publish all three pictures of the Dubonnet man, but failed to find a high-quality photo. Do you know that the gimmick was used in Argentina in 1940s, in the "Mejor, mejora, Mejoral" (Mejoral improves better) radio jingle? Mejoral, as far as I remember, was some kind of medicine.

The impact of Cassandre's graphic talent and genius about communication upon French collective subconsciousness cannot be emphasized enough. If you look carefully at the Dubonnet poster, for example, you'll see that the fonts in the name of the brand appear in various combinations of bold/outlined letters : DUBOnnet, DUBONnet, DUBONNET. This is not just by chance. In French, DUBO, DUBON, DUBONNET phonetically translates as Du Beau, Du Bon, Dubonnet (Beautiful, Good, Dubonnet). The gimmick just burned itself forever in a whole generation of consumers during the Interbellum. So did the little "Dubonnet song" aired on the radio (ads for alcohol and cigarettes were permitted everywhere, then) that people the generation of my parents still can remember, 80 years later :

It brings joy of life

Even more clever were the Dubonnet narrow, horizontal posters placed inside the Metro tunnels. Not in the stations, but on the walls of the dark tunnels in between stations. Along with the usual, highly recognizable gimmick "DUBO, DUBON, DUBONNET", the stylized, Art Deco style little character was pictured first holding his glass of wine, then raising his arm on a second poster and finally drinking the content of the glass on a third, final design. Inside the traveling wagons of the Metro, travellers could see the sequel of ideally framed and conveniently windows heigth placed designs suddenly lit up by the inner light of the wagons, the motion of the train generating the illusion of a short animated film, the viewer being in motion instead of the movie ! How clever, when you're trapped inside the wagons of some underground railway without anything else to look at throughout the windows, isn't it ?

Other than that... this is just another amazing post. Thank you very much, Lord K.

Comment by Pilsner Panther on March 28, 2011 at 9:08am
The type fonts, all by themselves, are astonishingly beautiful... and then there's everything else. Pure graphic genius.