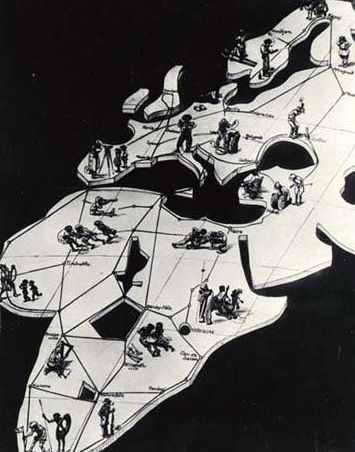 Sörgel (1885-1952) was a renowned German architect of the Bauhaus school, and a philosopher reflecting on culture, space and geopolitics. On the future’s horizon, he saw the emergence of three global superpowers, one uniting the American continent, another a Pan-Asian block, and Europe – possibly the weakest of the three. 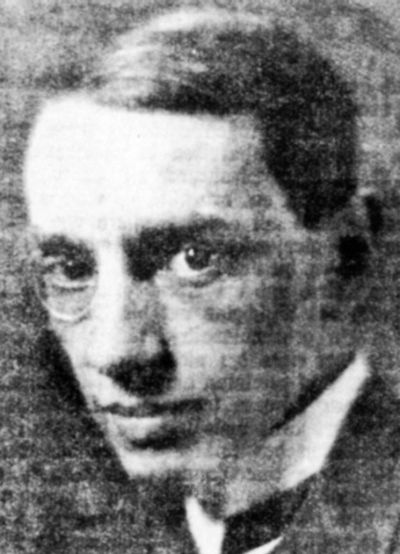 His solution was to engineer Europe out of its problems. Sörgel based his solution for Pan-European power and self-sufficiency on the observation that, although significant amounts of water flow into the Mediterranean through the Strait of Gibraltar (from the Atlantic Ocean) and the Dardanelles (from the Black Sea), its level stays the same, through evaporation. 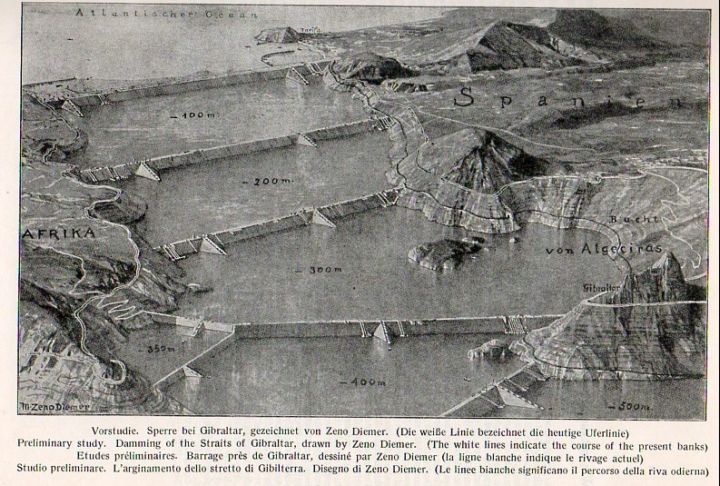 Hence his proposal to dam the Mediterranean at both ends, using the reduced inflow to generate massive amounts of hydroelectricity (110,000 Megawatt via several dams, of which 50,000 MW via the Gibraltar dam alone) and in the process create new land, which not only could be used for colonisation, but would also connect Europe to Africa. Thus would be created a new supercontinent, Atlantropa (giving the former easy access to the latter’s raw materials). 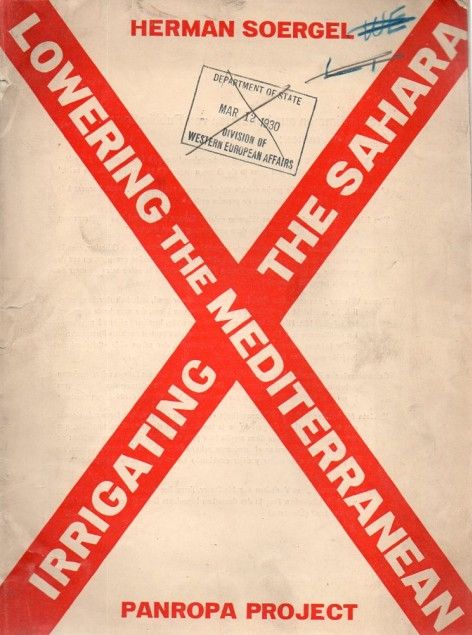 Sörgel first publicised his ideas in his 1929 book Mittelmeer-Senkung, Sahara-Bewässerung, Panropaprojekt (‘Lowering the Mediterranean, Irrigating the Sahara: the Panropa Project’), reiterating and specifying them in Atlantropa (1932). Later versions of the project included plans to create a series of giant lakes in Central Africa (Sörgel’s father, significantly, pioneered hydroelectricity in Bavaria). 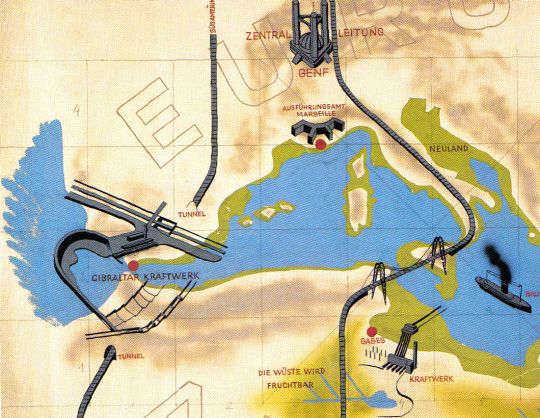 Sörgel, as a visionary pacifist, had noble motives and his ideas were not without merit, but the logistics of the project were daunting. He saw cheap hydroelectricity as the answer to a future in which non-renewable energy sources such as coal, gas and oil would dwindle to depletion; he thought colonising new lands in the Mediterranean would give European nations a positive focus towards cooperation and help avoid another war. The growth of industry and agriculture would thus be safeguarded. And the land reclamation of parts of the Mediterranean seafloor would mirror, on a much larger scale, the centuries-old communal struggle of Holland against the North Sea. It would also provide another outlet for Napoleon’s vision of forging a peaceful European Union through the joint colonisation of Europe’s East (an idea no doubt constructed to co-justify Napoleon’s Russia campaign of 1812). The massive works would go on for more than a century, eliminating unemployment for generations. But consider what was to be the lynchpin of Atlantropa, the Gibraltar dam. At its narrowest, the Strait of Gibraltar is 14 km (9 mi) wide. And yet, for some reason, Sörgel decided the dam should be built 30 km further inside the Mediterranean, where it would have to be significantly longer. The foundations for the dam would have to be 2.5 km wide, and 300 m high. To complete, it would take 10 years, and 200,000 workers, labouring in 4 continuous shifts. The dam would be crowned by a 400 meter high tower. Calculations at the time cast doubt on whether there would be enough concrete in the world to complete the gargantuesque project. 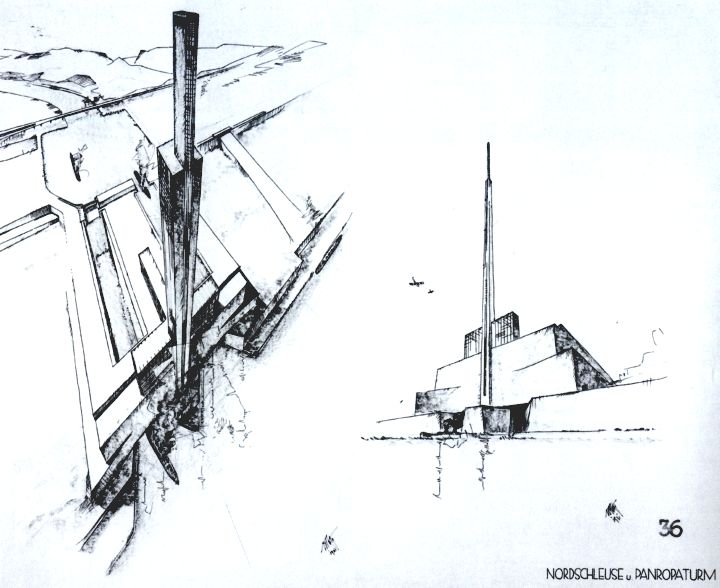 And consider what would happen to the Mediterranean, cut in two by the lower sea levels, with Sicily connected to both Tunisia and the Italian mainland (allowing, among other things for a regular train service between Berlin and Cape Town). In the western half, the water would be lowered by 100 meters, in the eastern half by as much as 200 meters, combining to create 576,000 km2 new dry land, a fifth of the Mediterranean’s surface, or more than the surface of Belgium and France together. Imagine the problems and traumas this would create for coastal cities such as Marseille or Genoa. Sörgel did propose the construction of new harbours, and did provide a special solution for Venice: another dam would safeguard its lagoon from drying out. But that lagoon would be a lake, 500 km away from the nearest seashore. 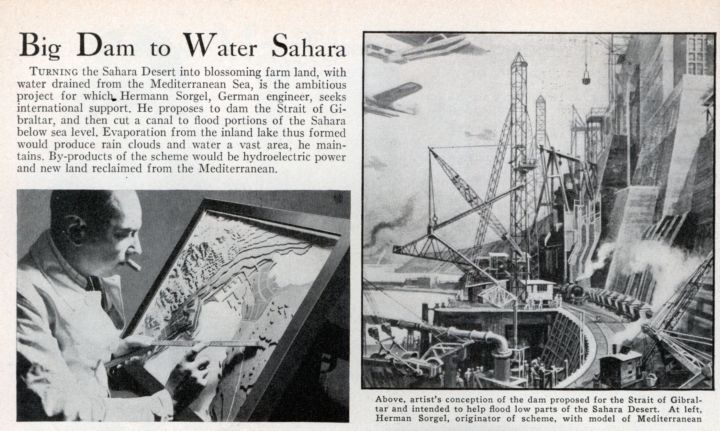 Sörgel’s plan would be considered outdated today for more reasons than just its megalomania. It was also completely eurocentric, proposing a Euro-African continent entirely run by and for the benefit of Europe(ans), Africa(ns) being reduced to supplying raw materials (he also saw a strong Atlantropa, also controlling the Middle East, as a bulwark against the ‘Yellow Peril’). Furthermore, there was totally no regard for its ecological impact (the increased salinity of the remaining Mediterranean Seas would have killed off much of the flora and fauna, the precipitation patterns could shift dramatically). And one shudders to think what would happen if the giant Gibraltar dam would be breached by a tsunami, an earthquake or a terrorist attack. Sörgel’s ideas never caught on with the Nazis, whose expansionist plans were oriented more towards the East than towards the South. The idea therefore survived the Second World War, but was eventually rendered moot by the advent of nuclear power and the end of colonialism.

Sörgel kept defending his ideas literally to the death: in 1952, he was hit and killed by a car while biking to hold a speech on his Atlantropa project, the dream of which died a slow death after his own. In 1960, the Atlantropa Institute was closed. Although Atlantropa never came close to realisation, or maybe because of it, the concept did gain some currency in science fiction circles. A few examples: 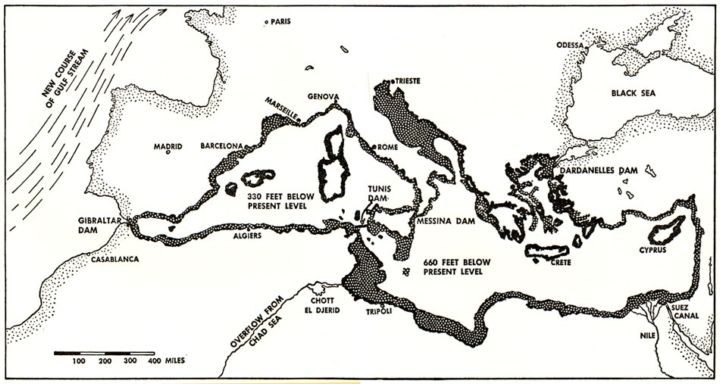 Thanks to Marc Itschner and Sebastian Castañiza for informing me of the Atlantropa project and of this map (in German), showing its Mediterranean component, which can be found on the relevant Wikipedia page. It shows (in the upper left corner) Venice, connected via a canal to the Mediterranean, and (in the upper right corner) the Sea of Marmara with dam and power station, (in the lower left corner) the main dam and power station at Gibraltar, (in the lower middle of the map) a second dam at Sicily to facilitate the differentiated lowering of the eastern Mediterranean’s sea level and (in the lower right corner) an extension of  the Suez Canal. The legend indicates planned rail links, planned irrigation areas through desalinisation plants, and amount of land reclaimed (in kilometers). 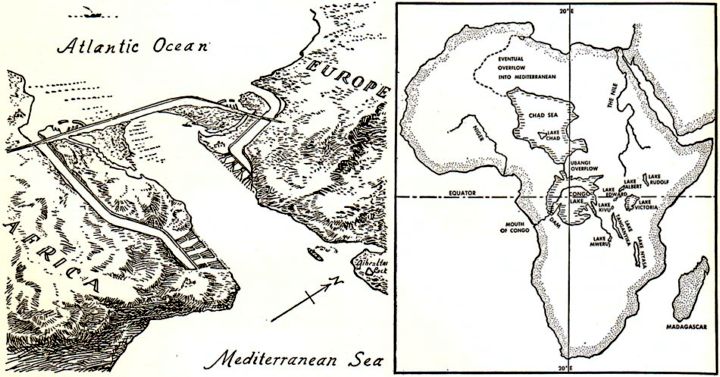 The second map of the ‘African’ part of the project shows the African interior dominated by a few huge, artificial lakes: Lake Chad hypertrophied into the Chad Sea, reaching deep into the Sahara, its overflow connected to the Mediterranean, but also connected via the Ubangi Overflow to a titanic Congo Lake, created by damming the Congo River and flooding most of Congo’(s interior.
--------------------------------

More detailed description of the Atlantropa project can be found here. Actually, Sörgel’s idea has been featured on different resources like io9, Modern Mechanix blog and Wikipedia (which published an extended list of Atlantropa in fiction). I stumbled upon it reading a new Dieselpunk blog in German. Thanks to this blog I watched a full-length documentary about the project. Even if you don't understand a single word in German you have to see the opening sequence:

Comment by Marcus Rauchfuss on June 2, 2011 at 1:17am
The documentary also has a few things to say about ocean currents and climate change... The technocrats of the 1920's and 1930's simply did not have all the facts we have. Makes you wonder what damage we are doing now simply by not knowing all the details...

The mother of all megaprojects! Only slightly less impractical than a bridge to Mars, and man, what an eco-disaster! The resulting lands would probably be like Death Valley.

But for the fun of imagining!