Small and harmless devices can be no less exciting than giant war machines. 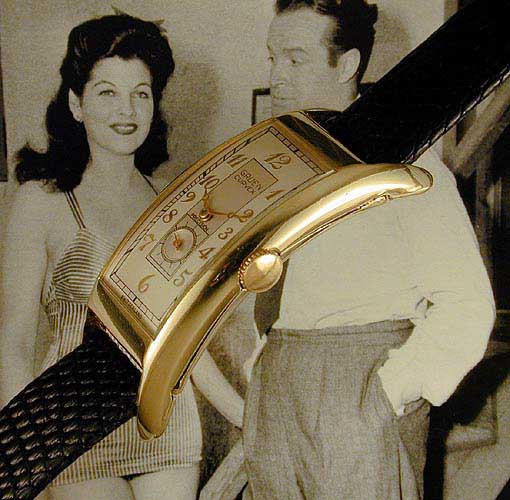 Today I invite you to have a look at Curvex watches - a masterpiece of design produced by Gruen company. Let's open a page of the excellent Gruen story by Paul Schliesser:

"By the early 1930s, men's wristwatches had overtaken pocket watches in popularity, although wristwatches were not yet considered appropriate for formal dress. Gruen pointed out in advertising that if a customer wanted to be properly fashionable, he needed to own both a wristwatch and a pocket watch. They helpfully quoted authorities on etiquette who supported this claim. Gruen even offered watch boxes that held one watch of each type. "

"The U.S. economy was staggering under the effects of the Great Depression—watch sales in the U.S. had gone from over five million to around 800,000 per year, and most of these were in the lower price range, not the upscale watches that Gruen had sold previously. After 1929, Gruen began to offer many less expensive watches than they had before, and ad headlines started to mention value and price. The shrinking market and reduced output is probably what prompted Gruen to divest themselves of ties to Aegler and to bring all outside movement production into the Precision Factory. "

"Gruen was not the only company to suffer—some of their competitors went out of business entirely. As bad as things were for Gruen, they were actually in a strong position relative to others in the U.S. watch industry. Hardest-hit were companies which had failed to move into the wristwatch market, like Howard, Hampden and South Bend, all three of which folded during this time. (South Bend had been the last surviving remnant of Dietrich Gruen's old Columbus Watch Company.) "

"The 1931 Carré, an innovative and unusual watch and a wonderful example of Art Deco design, had three intended uses: as a man's pocket watch, as a woman's purse watch, and as a small, portable table clock. The case was available with or without an attachment for a chain. Sliding the button on the side causes the case to spring open, revealing the diamond-shaped watch inside. The clever case design would stand upright when opened, making it useful as a small desk or bedside table clock, a convenient accessory for traveling. The Carré contains a round, 15-jewel movement similar to those used in early-1930s men's wristwatches. " 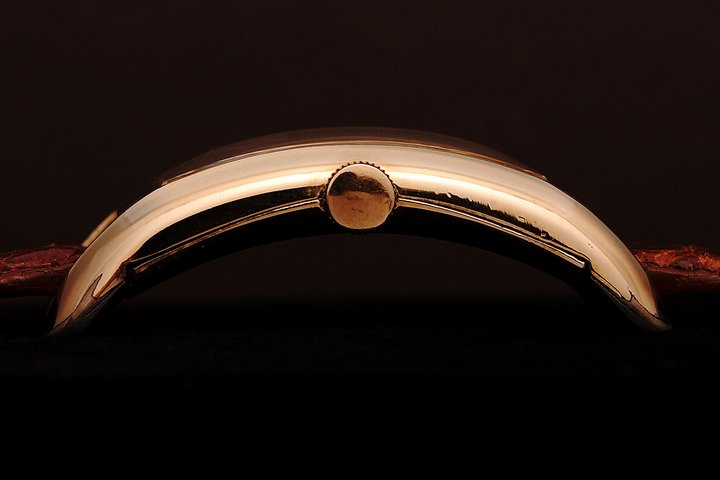 "The most famous Gruen wristwatch was the Curvex. These watches are one of the greatest examples of 1930s streamlined design. The patent for the movement was applied for (in both Switzerland and the U.S.) in 1929. U.S. patent 1,855,952 was granted on April 26, 1932 to Emile Frey of Bienne, Switzerland, but assigned to the Gruen Watch Company. It was later reissued as Re. 20,480 under Gruen President Benjamin Katz's name in 1937, after Frey's death. The first watches went on sale in 1935. " 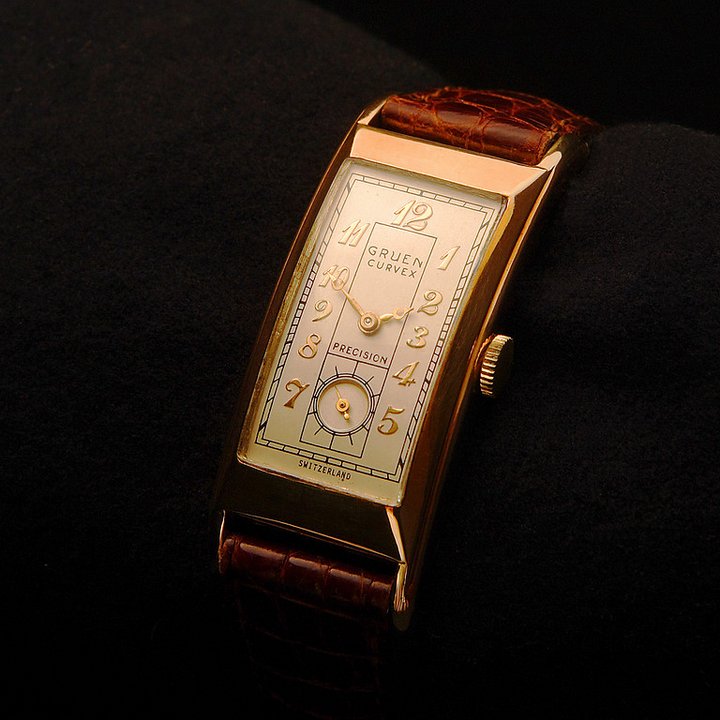 Curvex case and dial were designed by Count Alexis de Sakhnoffsky, who shaped the Mae West radio, Bantam cars, Hayes trucks and many other showcase pieces of the Diesel Era. Designer's name is strangely missing from the Gruen story, but it is an eyecatcher of the 1930s Gruen ads:

"Styled by Count Alexis de Sakhnoffsky, that genius of industrial design, built to exacting standards of Gruen and tested to split second life and death accuracy by Commander Frank Hawks - what more can money buy".

"Only the world-famous genius of Count Alexis de Sakhnoffsky combined with Gruen time-honored craftmanship could produce a watch such as Curvex - uniting brilliant beauty and pocket-watch accuracy!". 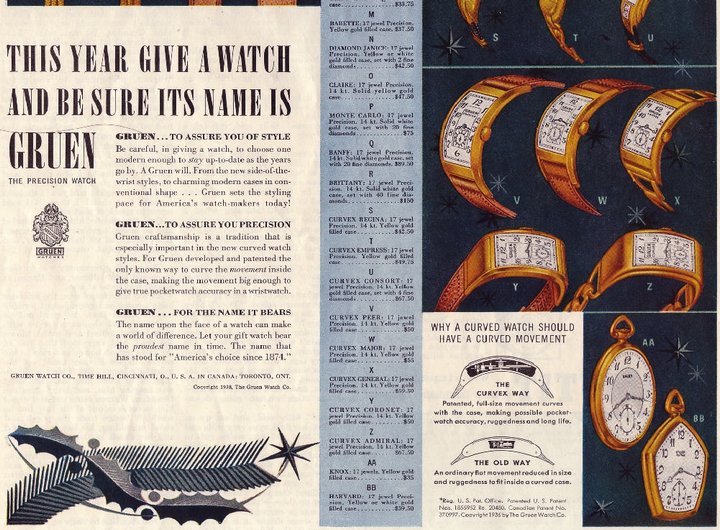 Gruen’s advertisements at the time stated that one famous newspaper columnist called the Curvex “the world’s first true wristwatch” since the watches fit the natural curve of the wrist. 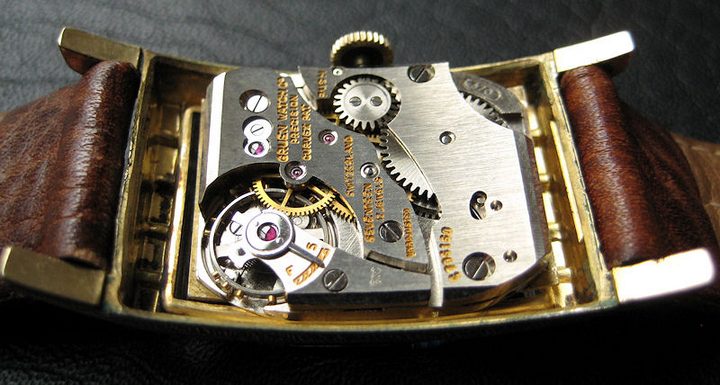 Back to Schliesser's story: "During the mid-1930s, the fashion was for longer and more curved rectangular watches for men. However, the thinness and curve of the case was limited by the need to put a flat movement inside. As the case got thinner and more curved, the only conventional option was to use a smaller and smaller movement. By a clever internal arrangement of the wheels and bridges, Gruen solved this problem by building a curved movement—this allowed them to put a bigger and more reliable movement into a thinner and more curved case than their competitors could. Since the design was patented, these curved movements were exclusive to Gruen. The Curvex was very successful, and was soon followed by women's models. " 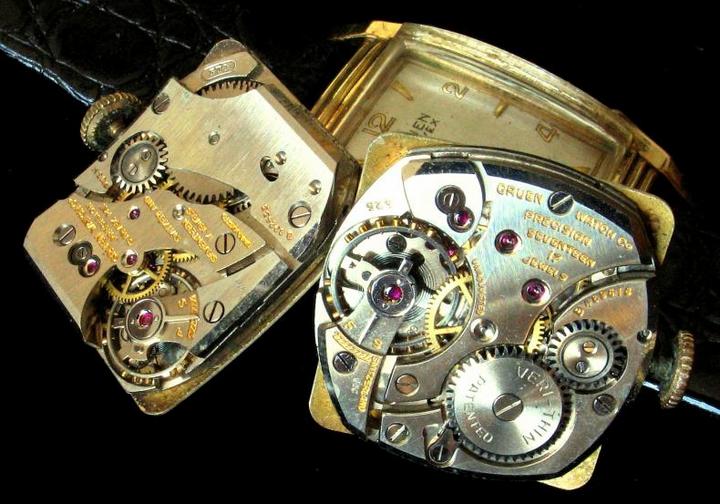 "There were four men's Curvex movements. The original 1935 model was the long, thin calibre 311. This was soon replaced by the more curved 330 (1937), also long and thin. As fashions changed, later Curvex models used the short, squarish-oval 440 (1940) and the short and wide 370 (1948). Watches with the 330 were called Custom Curved and 370 models were called Curvametric in Gruen advertising, although the dials are all marked simply Curvex and Precision. Any man's watch that does not contain one of these four movements is not a Curvex, no matter what is on the dial or how persuasive a seller might be. Dials can be redone or swapped with another watch; it's the movement inside that counts. " 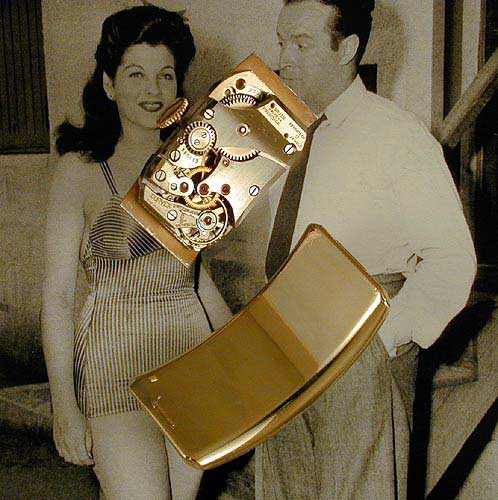 The "Majesty", full 52mm long (by 22mm wide), is the longest Curvex in Gruen's history. Some call it the "Bone-to-Bone" watch as it stretches from one wrist bone to the other. "The Majesty" was very popular with movie stars of the 1930's, notably Humphrey Bogart, and is dramatic in it's high arching curve and graceful, highly arched, case. (Source) 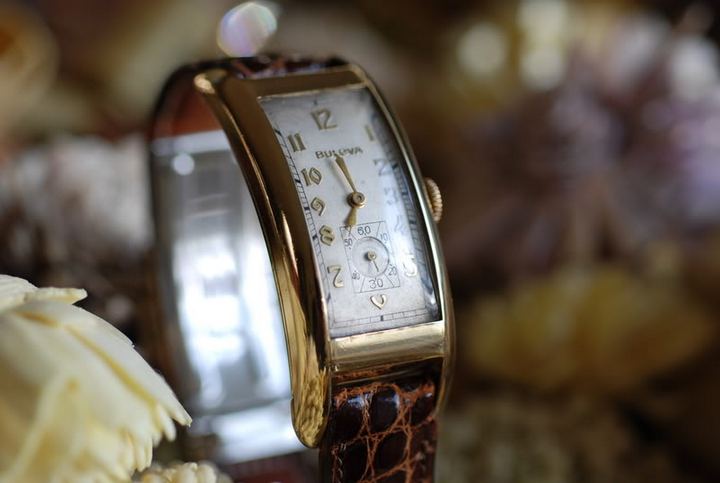 There were numerous Curvex imitations with curved case and smaller, flat movement, like this one from Bulova (above). 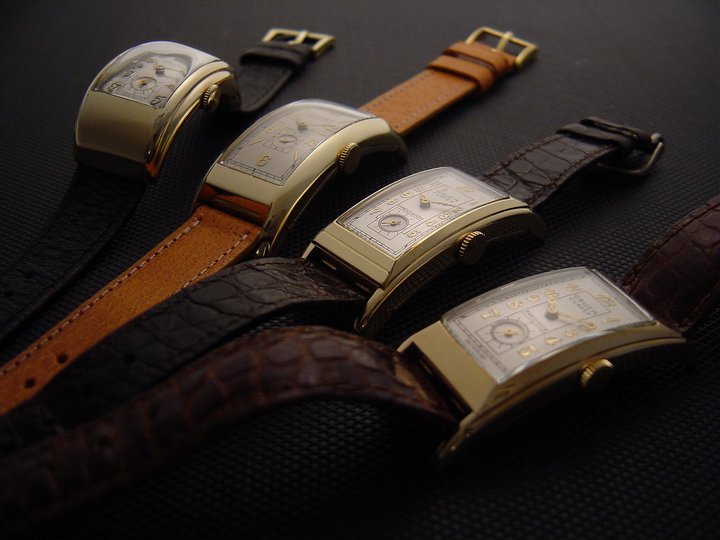 "All Curvex models have 17 jewels and are Precision grade; the cheapest Curvex prices started around $50 USD, and many models cost significantly more. In the 1930s, many workers made less than $3 USD per day, so even the cheapest jeweled watch would have been a major purchase. Because young people starting their adult lives could use a good watch, but could seldom afford one, a watch was the traditional gift from parents to children at graduation. Gruen, as well as their competitors, always ran special advertisements at graduation time. " "In 1936 the first Curvex models for women were produced, with the tiny calibre 520 curved movement. " 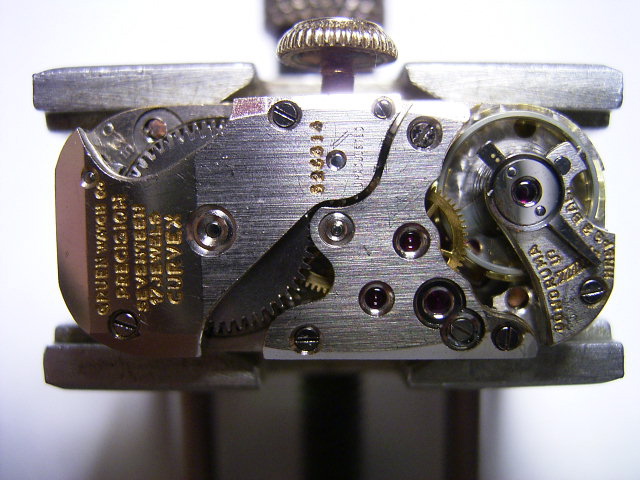 "Among the rarest and most collectable of Gruen wristwatches are the "driver's" models—the Ristside ("wrist side") and Curvex-Ristside models. Designed to be worn on the side of the wrist, they place the dial in line with the base of the thumb. When driving, you can see the dial without turning your arm or letting go of the steering wheel. 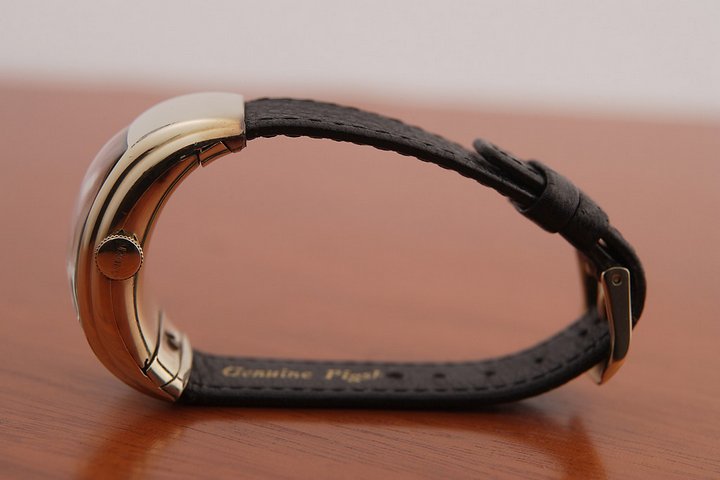 The Ristside models feel very strange to wear the first time you try one on—the watch feels as though it's projecting out of your wrist bone. Reading the time is very convenient, however—you don't need to twist your hand palm-down to see the dial, you simply bend your elbow and leave your hand in its relaxed position. This feels very comfortable and natural. " 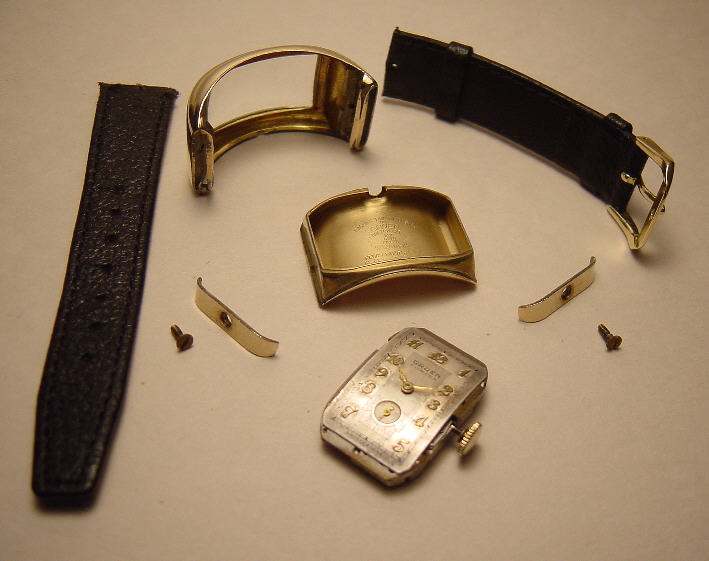 "A normal leather strap is awkward to use with these watches, because the buckle ends up on the little-finger side of the wrist, opposite the watch. Some originally had special straps, which were extremely long on the buckle end, but very short on the other end. Although they look strange, when worn these straps correctly place that the buckle on the underside of the wrist. Ads show many Ristside models on a scissors-type expansion bracelet. Since these have no buckle, they are espeically convenient to wear with this type of watch. Most Curvex-Ristside models use 330 Curvex movements. " 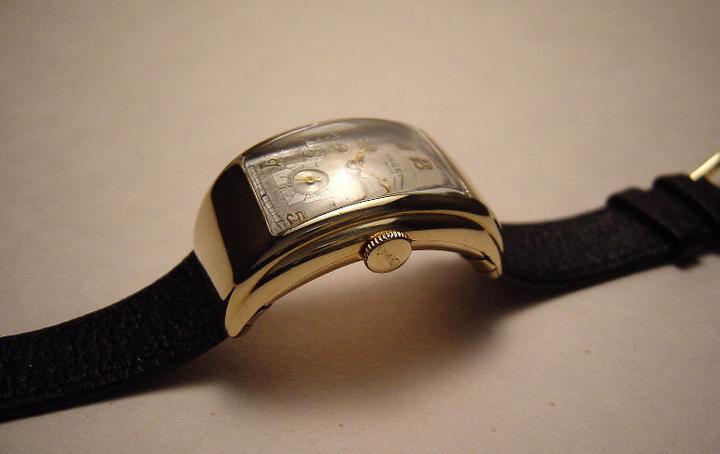 "Continuing the success of their VeriThin pocket watches, Gruen also launched a series of Veri-Thin wristwatches. Contemporary Curvex and Veri-Thin movements often are closely related, and can share many parts. By the 1940s, most Gruen wristwatches were either Veri-Thin or Curvex models, although a few cheaper models with older movements were still produced. " "Like the Curvex, the Veri-Thin was developed to honestly fill fashionable watch case shapes, and was an alternative to using a smaller, less-durable and less-reliable movement. Veri-Thin calibres are shaped to be thicker in the middle and thinner around the outside edges. Their dials are curved or domed, and the movement bulges up into the dial shape. The shape of movement, dial and case is designed to present a very thin edge when viewed at an angle, and to disguise the fact that the watch is thicker in the center. These styling tricks are very effective—many of these models look impressively thin and flat when worn. As styles changed, later models often had boxy, flat sides, and did not have the thin, flat look of the early models. Some Veri-Thin models have curved cases and most have curved dials, so it is common see these incorrectly represented as Curvex models, since Curvexes command higher prices. There are a huge variety of Veri-Thin models, which include some of Gruen's most outrageous designs. There is no need to misrepresent these watches—they are interesting in their own right. " 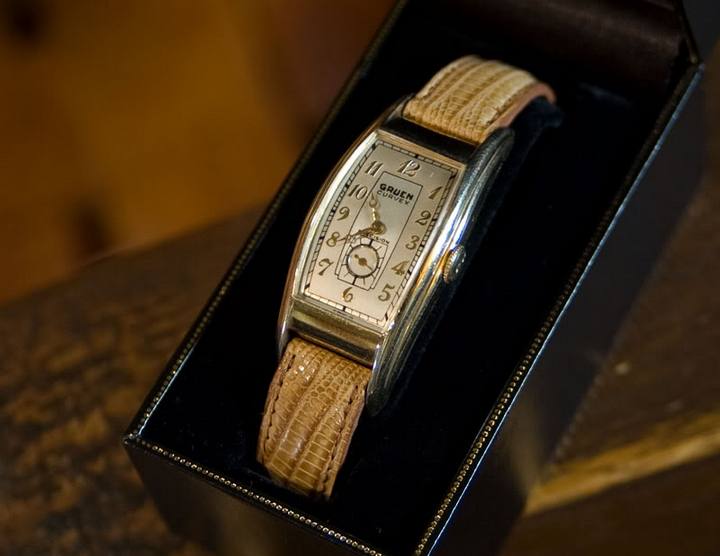 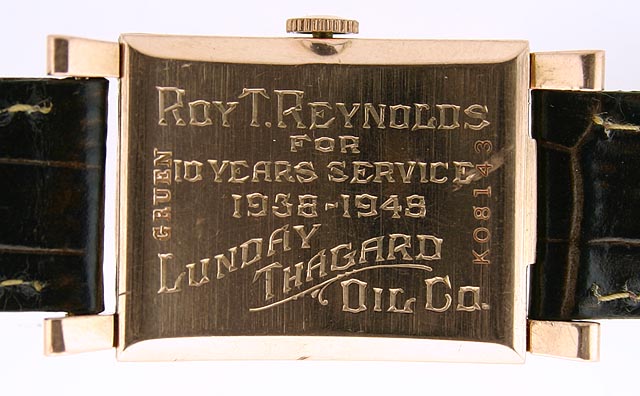 Special thanks to all Gruen thread contributors @ Watchuseek

Comment by Larry on January 19, 2011 at 10:15pm
That's an example of how something as simple as the engineering of a watch can itself be a work of art.