It may not surprise you, but I have a 3.5" x 2" lamented card stored somewhere in my attic that says I have a degree in Art. It should also not surprise you that my pitiful little diploma gets less play than the condom in a 14 year old's wallet. In a fair sense of irony and in honor of April Fool's Day, here's an overview of the 20th Century's most notorious ANTI-ART movement, known as Dada. 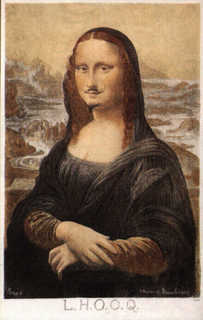 Reacting against a world gone mad, torn apart by both war and fascism, the Dada anti-art movement had a strong negative and destructive element. Dada writers and artists were concerned with shock, protest, and nonsense. They bitterly rebelled against the horrors of the world war, the decadence of European society, the shallowness of blind faith in technological progress, and the inadequacy of religion and conventional moral codes in a continent in upheaval. Rejecting all tradition, they sought complete artistic freedom.

Tzara's steady outpouring of Dada manifestos solidified the anti-art movement, creating a perfect definition of chaos. Rather than define their own style, the actions of the Dada sought to tear down the definition of art. Their "style" was characterized by chance placement, artistic anarachy, and absurd titles. A famous story points to the members throwing open a French-German dictionary and pointing to a random word on the page, hence even the name "dada" was born of chance (Dada could mean "yes yes," "father," or "rocking horse" depending on who was asked)

Marcel DuchampThe voice of the Dada

The French painter Marcel Duchamp (1887-1968) joined the Dada movement and became its most prominent visual artist. Earlier, he had analyzed his subjects as geometric planes under the influence of Cubism. His painting Nude Descending a Staircase pushed the limits of the static image's ability to record and express motion. To Duchamp, art and life were processes of random chance and willful choice, and he therefore became the movement's most outspoken orator.

Dada as an Art FormFrom the chaos comes a cohesive style 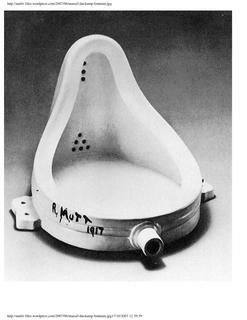 Artistic acts became matters of individual decision and selection. This philosophy of absolute freedom allowed Duchamp to "create" readymade sculpture, such as a bicycle wheel mounted on a wooden stool, and exhibit "found objects" such as old urinals in galleries. In essence, the works of the Dada pressed the public to consider how they felt about the definition of art by showing them how far that definition could be stretched and broken. Some got the joke while others were outraged, for example when Duchamp painted a mustache on a reproduction of the Mona Lisa. This act was not an attack upon the Mona Lisa itself. Rather, it was an assault upon tradition and against a public who had lost the humanistic spirit of the Renaissance.

As chaos often does, the Dada quickly spread. Despite the claim that they were not creating art but were mocking and defaming a society that had become insane, several Dadaists produced meaningful visual art that has contributed to graphic design. Dada artists Raoul Hausmann (1886-1977) and Hannah Hoch (1889-1978) claim to have invented the art of "photo montage," a technique of manipulating found photographic images to create jarring juxtapositions and chance associations.

Kurt Schwitters and The MerzDada hits the big time 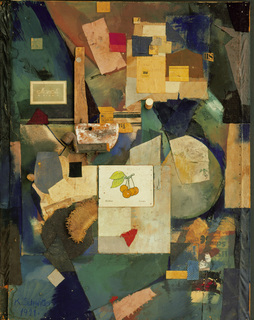 Kurt Schwitters (1887-1948) of Hanover, Germany, created a nonpolitical offshoot of Dada that he named "Merz," coined from the word kommerz ("commerce") in one of his collages. Beginning as a one-man art movement in 1919, his Merz pictures were collage compositions using printed ephemera, rubbish, and found materials to compose color against color, form against form, and texture against texture. His complex designs combined Dada's element of nonsense and chance with strong design properties. When he tried to join the Dada movement as "an artist who nails his pictures together," he was refused membership for being too bourgeois.

Schwitters wrote and designed poetry that played sense against nonsense. In the early 1920s, Constructivism became an added influence in Schwitters's work after he made contact with El Lissitzky (1890-1941) and Theo van Doesburg (1883-1931), who invited Schwitters to Holland to promote Dada. Schwitters and van Doesburg collaborated on a book design with typographic forms as the characters.

From 1923 until 1932, Schwitters published twenty-four issues of the periodical Merz, whose eleventh issue was devoted to advertising typography. During this time Schwitters ran a successful graphic design studio with Pelikan - manufacturer of office equipment and supplies - as a major client, and the city of Hanover employed him as typography consultant for several years. When the German political situation deteriorated in the 1930s, Schwitters spent increasing time in Norway and moved to Oslo in 1937. After Germany invaded Norway in 1940, he fled to the British Isles, where he spent his last years.

The Berlin DadaistsTaking an Axe to the Axis 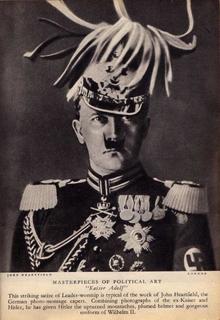 In contrast to the artistic and Constructivist interests of Kurt Schwitters, the Berlin Dadaists John Heartfield (aka Helmut Herzfelde) (1891-1968), Wieland Herzfelde (1896 - 1988), and George Grosz (1893-1959) held vigorous revolutionary political beliefs and oriented many of their artistic activities toward visual communications to raise public consciousness and promote social change. A German WWI veteran and founding member of the Berlin Dada group in 1919, Heartfield used the harsh disjunction of photomontage as a potent propaganda weapon and innovated in the preparation of mechanical art for offset printing. The Weimar Republic and the growing Nazi party were his targets in posters, books, magazines, political illustrations, and cartoons.

Heartfield did not take photographs or retouch images but worked directly with glossy prints acquired from magazines and newspapers. Occasionally, he commissioned a needed image from a photographer because photography was still considered a poor man's art form, and Heartfield's images met with immediate identification and comprehension by the working class.

After the stoßtruppen occupied his apartment-studio in 1933, Heartfield fled to Prague, where he continued his graphic propaganda and mailed postcard versions of his graphics to Nazi leaders. Learning that he was on a Nazi watch list in 1938, he fled to London where he stayed until settling in Leipzig, East Germany, in 1950. There, he worked mainly as a designer for theater sets and posters.

Before his death in 1968, he produced photomontages protesting the Vietnam War and calling for world peace. Unfortunately Still Timely is the title given to retrospectives of his graphic art.

Heartfield's younger brother, Wieland Herzfelde, was a poet, critic, and publisher who edited the journal Neue Jugend, which was designed by Heartfield. After being jailed in 1914 for distributing communist literature, Wieland started the Malik Verlag publishing house, an important avant-garde publisher of Dada, left-wing political propaganda, and advanced literature.

The painter and graphic artist George Grosz was closely associated with the Herzfelde brothers. His biting pen attacked a corrupt society with satire and caricature. He advocated a classless society, and his drawings project an angry intensity of deep political convictions in what he perceived to be a decadent, degenerate milieu.

End of the DadaThe flame that burns brightest… 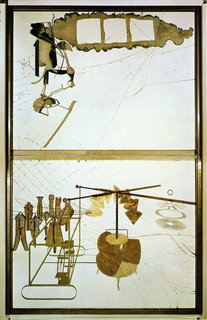 Having inherited Marinetti's rhetoric and assault upon all artistic and social traditions, Dada was a major liberating movement that continues to inspire innovation and rebellion. Dada was born in protest against war, and its destructive and exhibitionist activities became more absurd and extreme after the Great War ended.

In 1921 and 1922, controversy and disagreement broke out among its members, and the movement split into factions. French writer Andre Breton (1896-1966), who was associating with the Dadaists, emerged as a new leader who believed that Dada had lost its relevance and that new directions were necessary. Having pushed its negative activities to the limit, lacking a unified leadership, and with its members facing the new ideas that eventually led to Surrealism, Dada floundered and ceased to exist as a cohesive movement by the end of 1922.

Dada's rejection of art and tradition enabled it to enrich the visual vocabulary started by Futurism. Through a synthesis of spontaneous chance actions with planned decisions, Dadaists further rid typographic design of its traditional precepts by continuing Cubism's concept of letters as visual shapes rather than simple phonetic symbols.

If you like your Dadaist poetry, check out http://saunteringverse.com, which uses information based on your location to generate Dadaist poetry.

Comment by RPM Orchestra on April 5, 2010 at 6:29am
dada is best served on a soda cracker with a slice of sharp cheddar. thanks for the article w link to lord k's heartfieldness.

Comment by Tome Wilson on April 1, 2010 at 9:35am
Special thanks to LORD K for his excellent article on John Heartfield earlier in the year. Click on the links above to learn more about this Dada hero.