The North Texas Dieselpunks were extremely lucky to see the End Times Spasm Band during their recent tour when they came to Dallas. Since then they were kind enough to provide this interview for Dieselpunks.org. 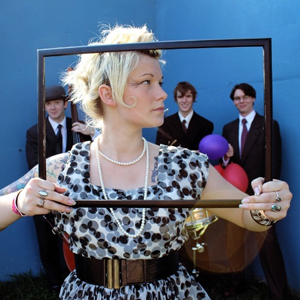 Would you be so kind as to introduce the members of The End Times Spasm Band?

We are Lyndsy Rae on vocals and washboard, Bart Helms on guitar and kazoo, Zach Wright on bass, And Eric Stucky on drums.

The term “spasm band” isn’t one that a person hears every day. Could you tell our readers what a spasm band is?

Bart: Spasm bands were New Orleans' version of what would later be called a jug band. Street kids would play any instrument they could get their hands on. Or, if that failed, they'd build one out of household items. Adults later picked up on what the kids were doing, and this became one of jazz's roots. When we first started, we played a more diverse set and weren't confident about calling what we did jazz or swing. We didn't have a jug either, so we couldn't be a jug band. “Spasm” fit us just right.

What is the history behind The End Times Spasm Band? How did the band get started?

Lyndsy: Most of us come from musically odd backgrounds: old weird America, hokey country, and vintage novelty music. At some point, we each heard some Django or a little Billie and something clicked.

The Band got started in our hometown here in Ft. Wayne , Indiana in 2008. We all played in bands prior to End Times Spasm Band but nothing that came close to the 1920’S and 30’S sound we hold now.We all happened to hook up one evening at a friend’s birthday party. I grabbed a songbook and started to sing old Ella Fitzgerald and even Woody Guthrie songs with the boys. Whereas when we heard that the cops were on their way because the party was too loud. We all quickly exchanged numbers in hopes of meeting up to make that same sound come to life once more. We played at a few open mics together and since then here we are touring the United States together in our minivan.

Over the years, what musicians or artists have had the greatest influence on the sound and presentation of The End Times Spasm Band?

Bart: For me, musically, I'm looking at small group and rag tag ensemble recordings of the 20s and 30s. Louis Armstrong's Hot Five, Joe Venuti's Blue Four and other studio projects from musicians who spent their evenings playing in large orchestras. I like big band swing, but the musicians were often at their most inventive for these hotter recordings. In the van we also listen to a lot of Cab Calloway, Fats Waller, and Slam Stewart.

Lyrically, I draw a lot of inspiration from modernist poets like Wallace Stevens, H.D., and Edna St Vincent Millay. Lowell's rules for imagists are a personal reference point.

Squirrel Nut Zippers might be the big motivating influence. They had a sound all their own and proved you could take this music and make something fresh, something not entirely derivative. 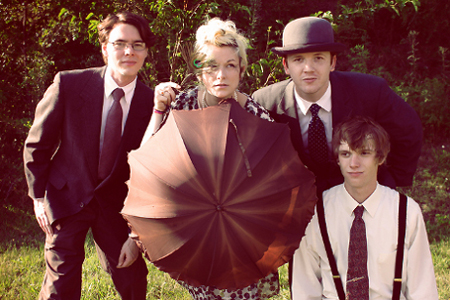 What’s been your biggest challenge as a band? Your greatest success?

Lyndsy: Haa haa….I think the biggest challenge has been explaining to people what kind of music it is that we play. For me there has not really been one big moment it is more little moments or opportunities all added up. I would say that our greatest success has been getting to tour the United States the way that we do. For the most part, I cannot believe we get along so well together. We all love it just the same so we all have sacrificed and worked just as hard for the music to grow in the right direction.

This question is for your lead singer Lyndsy Rae. According to your band’s web site, you spent most of the 2010-2011 school year in southern France. Dieselpunks.org has quite a few French members. Could you share some of your experiences while there?

Lyndsy: Well, I lived in France for a year to attend the Université de la Mediterranean. Everything in Europe is so close and cheap to get to so it is foolish not to travel while your abroad. I took time and went to Spain, Ethiopia, Monte Carlo, Istanbul, Turkey and Paris.

I was living in Aix-en-Provence (30 Minutes from Marseille in the very South of France) which is right on the French Riviera. It was literally just like a storybook. The South of France is overwhelmingly different. HOW? Hardly any police (the butcher, the baker, the grocer, the people mostly look after their town) teachers will smoke in class sometimes, everyone is late (“take your time” “life is good” “Do as you need”), they are all so laid back, open minded, music everywhere (accordions!) cobble stone streets that look like allies. Cute little cafés by the bucket loads, and there is of course the beautiful French language. Fresh food that you can easily rise in the mornings and then go glean from the markets. The farmers all come into town and sell you their hand-picked goods, its heaven. The olives, honey, wine, are to die for. That place was ethically blissful.

To say the least I loved it and I miss it very much. I do hope that End Times Spasm Band ends up over there soon.

This next question is for your songwriter and guitarist Bart Helms. Not only are your songs fun but the lyrics are also extremely intelligent. One example is The Bertrand Hustle, which is about the highly controversial philosopher Bertrand Russell. Can you give us some insight in the creative process of how you write such wonderful songs?

Bart: Thank you. Before the band, I was living the life of a professional grad student, studying linguistics, cognitive science, and the history of science. During my last semester, I had a goal of writing one song every week. Since school kept me isolated from many of the things songwriters normally write about, I wrote lyrics inspired by those things that I was obsessing over. However loosely. “Bertrand Hustle” was written in this period. I was reading about positivism and the foundations of mathematics, so Russell's name came up a lot. The original version even had a verse about Russell and Whitehead's proof for “1+1=2”, but it was cut well before I made the first demo. Lyndsy is probably glad it didn't survive.

Possibly an effect of wanting to do anything but be a student for a while, there aren't many songs like that on High Wire Lover, but we're bringing them back. Live, we're playing a new song called “Sound Sound Sound” that quotes from Carl Sagan and Ludwig Wittgenstein.

Dieselpunk blends the art and culture of the 1920s - 1950s with today. Would you say that this also describes your music and, if so, would you feel comfortable being described as a Dieselpunk band?

Bart: People struggle to define our sound. If “Dieselpunk” helps people relate to our music, I'm for it. I do think we could be described as an alternate future for the music of the 20s and 30s. That certainly sounds very Dieselpunk.

You just wrapped up a tour of the United States. Are there any interesting stories from your recent tour that you would think our readers might enjoy?

Lyndsy: Well there are many stories; it is always quit interesting brushing your teeth in a bars bathroom. Most stories are bore attempting to find a place to sleep after the show. Often we wish for no more than a wooden floor. Whereas when you expose yourself to strangers, there is always, this magic transform the night has on people. They either turn into flame eaters, great cooks, “cat people” (or snake people), fellow musicians, Medieval Viking knights, sword swallowers, creepers (to say the least) or our favorite good friends.

You’ve recently released your first full-length CD, High Wire Lover. Would you tell us about it?

Lyndsy: We are very proud of High Wire Lover. As I tell everyone and as you can see by the cover of the album, it is my little circus. It was recorded before I left for France in 2010 and the boys worked on it and tweaked it while I was away. So upon my arrival back to the States in June 2011 the Album High Wire Lover was just as ready as we were to hit the road and be heard.

Bart:We recorded it with Geoff Montgomery, who also engineered our little orange EP and the upcoming Harley Poe album. I'd never seen sessions like High Wire's, where the recording happened in two chunks. The vocals and rhythm section were tracked in a hurry because Lyndsy was off to France, but the lead and overdub dates were scattered over several months because we had no definite release plans. But now it's out on Chain Smoking Records and can be found in all the usual places from iTunes to Amazon to Bandcamp.

What can Dieselpunks do to help spread the word about The End Times Spasm Band?

Lyndsy: Oh my! You don’t know how thankful we are already for the fact that you’re listening, dressing up and staying tuned. Coming to shows, telling your friends, listening to the music and keeping in touch ya’ll seem to have down quit well. Fans like you are the reason we keep creating. You are the ones reviving us as we revive the sound of the 20’s and 30’s. It is refreshing to know that there is a group of people out there that get it. It was such a treat to be so far from home and bump into what only can be described as a family of fellow vintage loving friends.

You can learn more about The End Times Spasm Band at http://endtimesspasmband.com/

Very nice interview..I like what I've heard from them so far. Now I just need to buy their music.

Thank you Larry, great piece I love these guys they are the bees knees!