Minefields are war's lingering, deadly echoes. Decades after hostilities cease, the mines sowed by nations will remain behind, waiting to be found by men, women and children returning to the one-time battlefield. Removing the mines, sowed by the millions during the frenzy of war will never happen. But during combat, how do soldiers advance through these deadly fields of hidden explosives?

In the 1990s the United States developed the MICLIC, or mine clearing line charge. Essentially a tube of plastic explosive unspooled from a combat engineering vehicle by a launched rocket. The explosive line lands in an area suspected of concealing mines. The charge is ignited, setting off any mines through a sympathetic detonation, clearing a path eight meters wide and 100 meters long.

The simplicity of this innovation is not all that new. In fact, during World War II a system was devised that created the same thing, but with decidedly less sophisticated components.

The British developed the Conger (named for the eel) to clear German minefields as they advanced into Europe from D-Day forward. Cobbled together, the conger on the face of it is very much like the MICLIC. However, its primitive engineering made it nearly unusuable. But what it did prove was a concept that took 40 years to reemerge.

The Conger was a two inch diameter woven hose with a length of 330 yards. The empty hose went into a spool as part of a modified Bren Gun carrier that had its engine stripped. The Conger system was then towed behind a tank or other tracked vehicle.

Once an advancing force encountered a suspected minefield, the Conger was employed. It's short comings rising in its liquid explosive that filled the hose.

The hose line was attached to a 5-inch rocket, a modification of the British Z-battery system mounted to the Bren carrier's right side. The rocket launched and unspooled the hose, arcing through the air before landing in the minefield.

A British version of nitroglycerin, stored in tank on the Conger carrier, was then pumped into the sealed hose that lay across the terrain. Over 2,000 pounds of explosive nintro were pumped into the 300 yard hose.

The nitroglycerin filled hose was ignited, clearing a 20 foot wide path in the minefield. 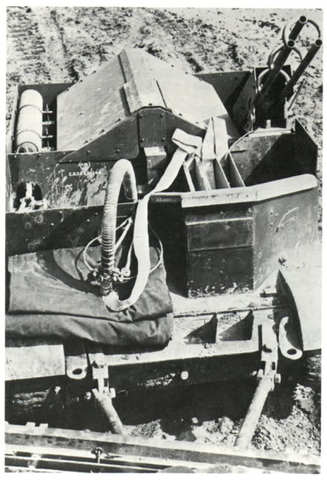 While brilliant, the Conger was also very dangerous. The British only used their own mine clearance system once, during the battle of Calais. And the United States took delivery of around half of the 100 Congers ordered, but never deployed them due to safety and lack of proper train-up time. Of particular note was the susceptibility of the nitroglycerine's stabilizer to freeze when temperatures got below 32 degrees Farenheit. This made the liquid explosive absolutely dangerous to handle in the cold, making it useless.

:o It is like early detcord. But super dangerous.