However, firing the compact tube artillery from the thigh would be one painful lesson learned. In reality, the Japanese Type Grenade Discharger was an ingenious system that utilized one grenade in three forms.

As modern mobile warfare evolved, militaries began to look for practical, yet potent weapons systems that were man portable. In Japan, designers sought one grenade with three methods of deployment. The result was the Type 91 grenade, which could be adapted to being thrown by hand, from the muzzle of a rifle or from the Type 89 discharger.

Essentially a rifled metal tube, mounted to a vertical rod (which concealed the simple lanyard spring loaded firing mechanism) the Type 89 fired two primary shells. The first was the Type 91 hand grenade, a fragmentation grenade that could be adapted to different deployment methods. 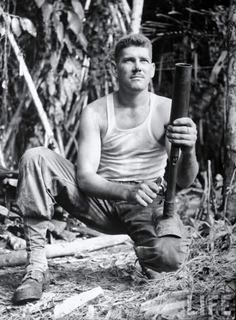 The second round was a dedicated mortar round, a 50mm High Explosive round that detonated upon impact. A pair of additional rounds, smoke and incendiary, were also fired from the Type 89.

Firing was achieved by aiming the tube at 45 degrees, with distances adjusted by a component inside the tube itself. A metal knob at the base of the tube, above the support rod, allowed a screw and cup arrangement to rise or drop inside the discharger.

When screwed to the bottom of the tube, the cup allowed a round to be launched at a higher velocity, with increased spin, meaning an increased range. The highest seating in the tube meant a shorter, low velocity range was achieved.

A simple scale on the discharger was hash-marked for ranges between 120 to 650 meters for firing the Type 89 shell.

Looking at the curved baseplate, it's easy to see where U.S. troops confused as a brace against the knee. The mortar was designed to be fired from an angle, braced against the ground or a log. The discharger was also versatile enough to be used in point attacks. When braced on a vertical tree or building wall, the Type 89 could fire upon approaching, horizontal targets.

Just as a note, if you actually tried to fire that thing off your leg or (heaven forbid) your knee, the recoil it produces is enough to break your knee cap or thigh bone, as the soldiers who believed that it really was fired off the knee.