The Largest Land Plane in the World!

The Junkers G.38 was a large German four-engined transport aircraft which first flew in 1929. Two prototypes were constructed in Germany. Both aircraft flew as a commercial transport within Europe in the years leading up to World War II. 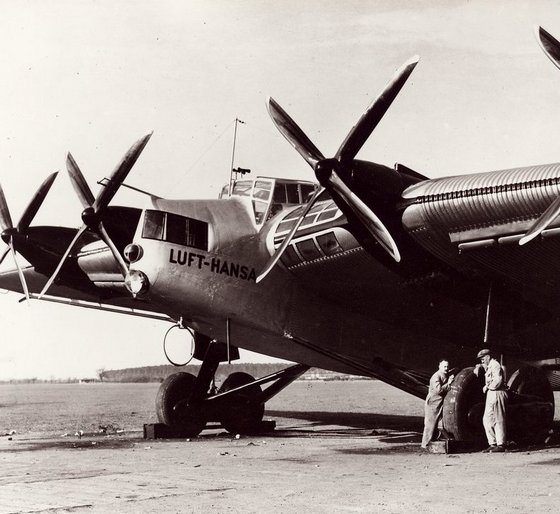 The G.38 carried a crew of seven. On board mechanics were able to service the engines in flight due to the G.38's blended wing design which provided access to all four diesel powerplants. Its wingspan was 44 m (144 ft), maximum speed - 225 km/h (140 mph). More specs

On 1 July 1931 Lufthansa initiated regularly scheduled service between Berlin and London on flights carrying up to 13 passengers. This London-Berlin service was halted in October 1931 to retrofit the aircraft and expand the passenger cabin of the D-2000. Construction lasted from this time until the summer of 1932, during which a second deck was built within the D-2000's fuselage - enabling an increased cargo capacity and seating for up to 30 passengers. Additionally the D-2000's engine were again upgraded to four L88s, giving a combined power total of 2352 kW (3154 hp). Also at this time the D-2000's certificate number was changed to D-AZUR.

Meanwhile, a second G.38 - factory number 3302 and c/n D-2500, later changed to D-APIS - was built with a double deck fuselage and capacity for 34 passengers. Six passengers were carried in two compartments in the leading edge of each wing and the remaining 22, on two levels, in the fuselage. Lufthansa used D-APIS on a scheduled service covering the cities Berlin, Hanover, Amsterdam and London. This aircraft was named the General Feldmarschall von Hindenburg.

In 1934 D-2000/D-AZUR had its engines upgraded, this time with Jumo 4 engines, giving a total power rating of 3000 kW (4023 hp). Both planes were in service simultaneously until 1936, when D-AZUR crashed in Dessau during a post-maintenance test flight. Lufthansa had to write off this aircraft due to the extensive damage, but test pilot Wilhelm Zimmermann survived the crash, and there were no other casualties.

The second G.38 - marked D-2500 and later D-APIS - flew successfully within the Lufthansa fleet for nearly a decade. With the outbreak of World War II the D-2500/D-APIS was pressed into military service as a transport craft by the Luftwaffe. It was destroyed on the ground during a RAF air raid on Athens on 17 May 1941.

During the 1930s, the design was licensed to Mitsubishi which constructed and flew a total of six aircraft, in a military bomber/transport configuration, designated Ki-20.