The Sky's the Limit for China's DIY Aviators

The Sky's the Limit for China's DIY Aviators
By Michele Travierso (Wired.com)
December 27, 2009

SHANGHAI - The buzzing of small airplanes is very rarely heard in China's vast yet closed skies, and flying for the sheer joy of it is still a novelty. But that is slowly changing as enthusiastic do-it-yourselfers take to the sky by whatever means possible.

China is home to a widespread DIY culture fed by necessity (the mother of all invention) and innovation. These garage builders and innovators are, like their products, often called shanzhai. Literally translated, it means "mountain strongholds," but it has come to mean nonprofessional or clandestine manufacturers turning out products from the basic to the highly sophisticated. These shanzhai often take familiar products, concepts and marketing memes and remake them with peculiar but innovative twists.

Aviation is by no means an exception, and it has its share of shanzhai builders. But there is more to it than that. China's emerging aviator class is spreading its wings with a plethora of approaches, from the ramshackle to the sophisticated to the potentially revolutionary. They're using everything imaginable, from old motorcycle engines to electric motors to even their own legs, like Mao Yiqing and his human-powered airplane shown above. You could easily plot these adventurous innovators on a graph, with the X axis showing their skill and the Y axis their financial means.

Occupying the lower right corner of that graph would be 20-year-old Wu Zhongyuan, a farmer from Henan province. He has since childhood dreamed of flying and spent three months and $1,600 building a shanzai helicopter. The airframe, if you could call it that, is fabricated from a steel scaffold. Power comes from an old motorcycle engine twirling wood blades. Zhongyuan claims the chopper will fly to 800 meters (2,600 feet), but so far hasn't been able to prove it.

Provincial authorities have forbidden him from flying on safety grounds. 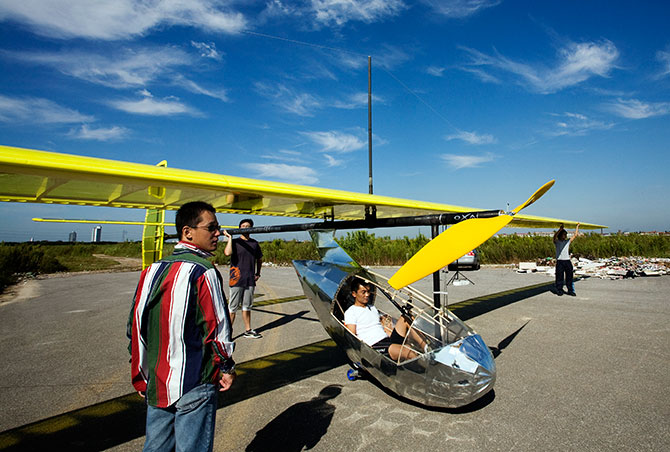 Moving upward and across our graph we would find Xu Bin, a 31-year-old farmer from Zhejiang province. Bin became an internet sensation and the face of the shanzhai zeitgeist when a video of him flying his autogyro went viral.

Bin managed to design and build the contraption, which uses a rotor for lift and a propeller for thrust, then teach himself how to fly it after checking the internet for guidance. He's built four flying machines, including a two-seater. It's strictly a low-budget affair, as Bin finds using new engines beneath his dignity. Using old motorcycle engines, he says, "keeps me on my toes. It prompts me to be a better designer."