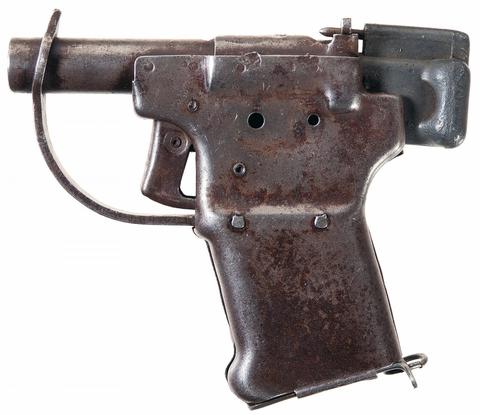 Arming guerrillas and insurgents, especially during World War II, was accomplished in two fashions. One was to bundle up any recent front-line weapons and get them to the fighters of an occupied nation. The other was design simple, easily mass produced weapon that were more disposable than maintainable. It also had a significant psychilogical impact on both the occupied and occupiers.

One such pistol was the FP-45 Liberator, a single-shot .45 ACP pistol designed for fighters in Europe and beyond.

Made of 23 stamped metal parts, it took six months from start of design to end of production for the Liberator to begin its short run through history.

Chambered in .45 ACP, the standard pistol caliber of the United State military during World War II, the Liberator started life under a cloak of secrecy. Called a 'projector' the Liberator was begining its life as a faux flare gun. However, chambering in .45 ACP left no doubts to its real purpose.

General Motors Corporation, in just under three months, churned out one million Liberator pistols before production came to a halt.

As to the deadly effectiveness of the Liberator, that is where it came up short. Its supremely simple construction was a trade off to degraded accuracy.

With an unrifled barrel, the Liebrator could only push out the big, heavy .45 ACP round at a muzzle velocity of 800 + feet per second. The resulting low velocity, un-spun round, had an effective range of 12 feet.

Loading and firing the single-shot gun was simpler than its construction. A spring-loaded breech block at the rear of the gun was pulled back. This also "cocked" the gun. The breach was swung to the left. A vertical gate, like a guillotine was raised, clearing the breech for the round.

A .45 ACP round was inserted, the gate lowered and the block swung back into place. Trigger pulled, gun goes bang and the spent case remains in the gun until the above procedure is repeated.

To dislodge the spent case, one needed to poke it out via a stick down the barrel from the muzzle. Additional rounds were stored in the small grip of the Liberator.

Ultimately, the Liberator never saw mass air-drops into Europe. It was tangelntaly believed that if quantities of the pistol were discoverd by occupying forces, this would prove an intimidating factor, planting seed of doubt and worry what kind of malice could be out there waiting for them.

Interestingly, only soldiers in China and Philippines were given the guns for their fights against the Japanese.

In an article I read about the OSS, the liberator was described "as a gun used to get another gun".

I can only wonder why actual handguns were not distributed instead.