Today, a pair of Transatlantic liners, the first diesel-powered passenger ships of respectable displacement (27,000 grt) and the last built for the famous White Star Line. 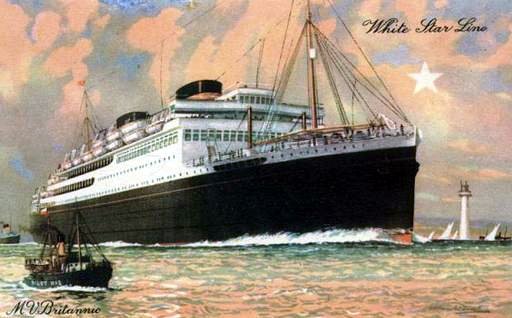 When the Cunard Line and the French Line started off with their projects of building the Queen Mary and the Normandie, the White Star Line too wanted to compete. They presented plans of a ship with a thousand feet in length, and a speed to rival the ship’s two competitors. The ship was supposed to be named Oceanic after the first steam vessel in White Star possession. But as timed hardened and the Depression drew closer, White Star had to cancel their ship. Cunard put all work on their ship on hold. Only the French managed to continue their work.

Since the building of the Oceanic III already had begun in 1928, lots of steel now lay unusable. Instead of throwing it away, White Star decided to have it put in another vessel, a vessel similar to the Oceanic’s planned proportions. Just as with the Queen Mary and the Normandie, the Oceanic was supposed to bear three squat funnels. The new and smaller ship would only sport two of them, but otherwise be a copy of the thousand-footer. The name of the vessel that would bring the White Star Line into the modern world of shipbuilding, was Britannic. On August 6, 1929, the Britannic was launched. The world was interested in White Star’s new notion of external design. One interesting feature was that the ship’s forward funnel - not the aft one - was a dummy. This dummy was not used for ventilation as ordinary dummy-funnels used to; it housed the radio cabin and the engineering officer’s smoking room. In June, the next year, the world’s heart would beat one extra beat, when the inside of the ship was revealed upon delivery. It was obvious that the new ‘Art Deco’ style had influenced the ship. Much light wood and other artistic novelties were shown inside the ship. The Île de France from 1927 had set the pattern. The Britannic’s maiden voyage started off from Liverpool on June 28, 1930, and continued to Belfast and Glasgow, before heading for New York. The passengers could choose to travel in three classes: Cabin, Tourist and Third. This dividing (instead of First, Second and Third) meant that the ship’s lower class had been given less space, and so had the higher class. All about the liner circulated around equality and this lead to that the Britannic became a very popular ship. 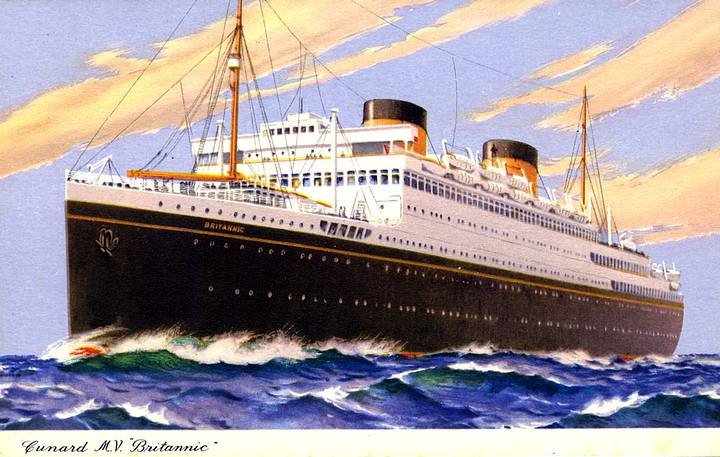 It was not only in appearance the Britannic was a novelty. The ship’s machinery was of an entirely new breed. She was the first major British motor-vessel on the seas, and her two Diesel engines - developing 13,000 horse power each - only consumed half of the amount of fuel an ordinary steam vessel did. This made the Britannic an interesting point of view when ship builders in the future decided upon Diesel machinery instead of the classic steam engine. But it would take time before the Diesel would rule the market. The Queen Elizabeth 2 of 1969 had her engines remade from steam to diesel-drive in 1987! The efficiency of the Britannic’s Diesel engines could easily be proved by showing the radiators in the engine-room, used to heat the cold place. 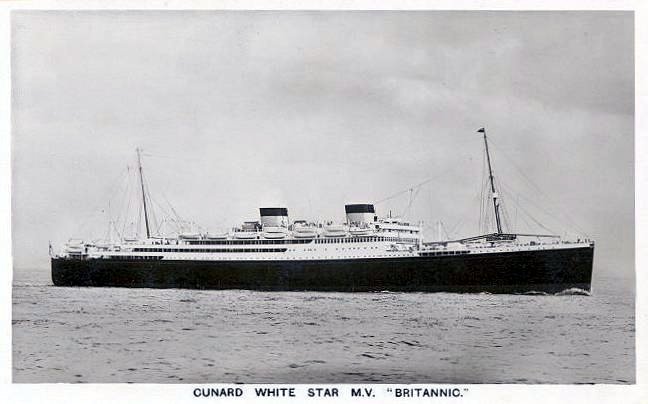 Britannic spent her summers on the North Atlantic and her winters cruising to the Caribbean out of New York. She became part of Cunard White Star in 1934, but continued to carry White Star's colors and fly the White Star burgee with (and until 1950, above) the Cunard house flag for the balance of her career. Along with her sistership Georgic, she moved to the London-New York service in 1935, and remained there until World War II began. She served as a troopship during the war, carrying 180,000 troops and traveling a total of 376,000 miles. She resumed service on the Liverpool-New York route in 1948, became a Cunard vessel (still flying White Star colors) when Cunard absorbed Cunard White Star in 1950. 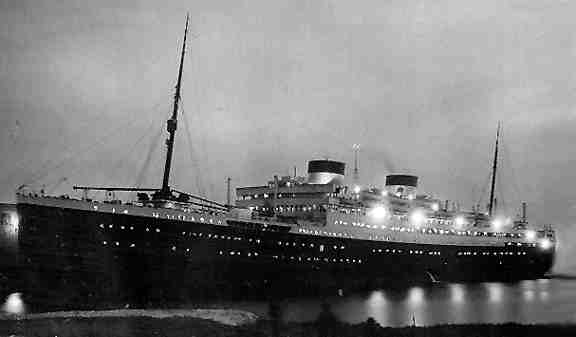 Britannic was the only ship to be owned by all three companies: White Star, Cunard White Star and Cunard. (Georgic also sailed for Cunard in the early 1950's, but by then she was on charter from the British government, which owned her.) 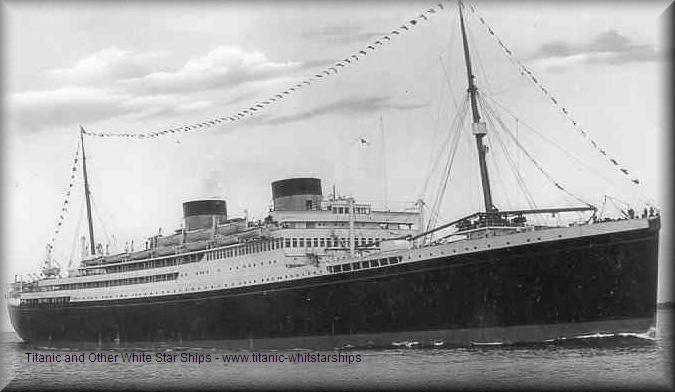 Britannic made her final Liverpool-New York sailing (and the final Atlantic crossing by any White Star ship) in November 1960. Her final departure from New York, on  November 25, 1960, was marked by the same fireboat escort which normally accompanied maiden voyages. After her arrival home, Britannic made White Star's final departure from Liverpool on 16 December, when she left under her own power for the ship breakers. The sister was launched on November 12, 1931, and was christened Georgic. Now the White Star Line could once again claim to operate a new duo of ships on the North Atlantic, and that was something rather rare. Since the ships was not in the class of Majestic and Olympic none of them was given the rank of flagship. The Southampton-New York route was maintained by the Majestic and the Olympic, whilst the Liverpool-New York route was mainly taken over by Britannic and Georgic. 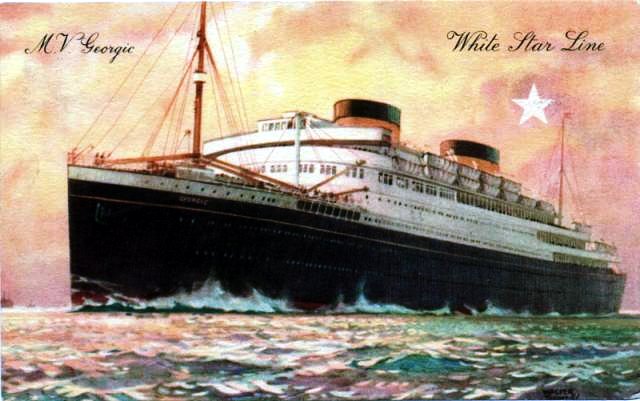 In appearance, the Georgic looked somewhat different from the Britannic. She had a more rounded bridge-front and some of her windows on the superstructure differed from her sister’s.

On June 4, 1932, the Georgic went though her sea trials. During these she carried guests which had been ferried out to her on the Belfast S.S. Co.’s Ulster Monarch, which had been chartered for the occasion. Six days later she was handed over to the White Star Line. On June 25, the Georgic set out on her maiden voyage between Liverpool and New York. She managed superbly, and arrived at New York twelve hours early. In September the same year a charity banquet was held on the Georgic while she lay in the Gladstone Dock. Later during the off-season of the year, just as her sister Britannic, the Georgic was used cruising from New York. 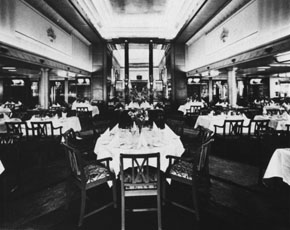 In 1933 the Olympic was considered old enough to be replaced by the Georgic. Thus was her new home port Southampton and her route therefore Southampton-New York. In spite of this she continued some of her Liverpool service, and at one occasion in October the Georgic landed a 3,000 ton record cargo of fruit at Liverpool. 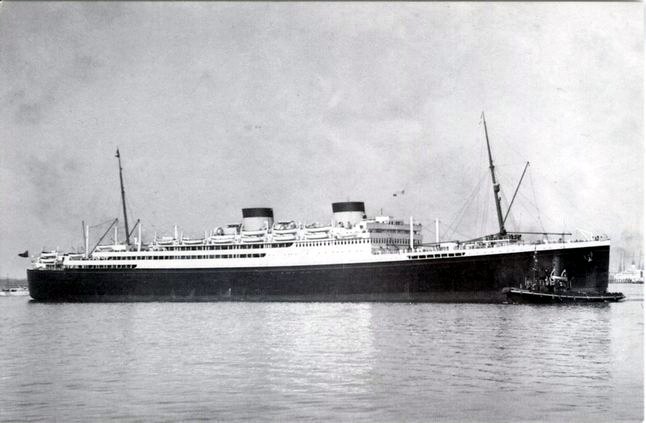 In 1934, the White Star Line could not resist the economic pressure any longer. They were forced by the government to merger with Cunard; in order to have the government finance the Queen Mary-project, which had been on hold for years. In the new company there would be ten directors of which four were from the White Star Line. Obviously, Cunard had the upper hand in the Cunard-White Star Line, but all of White Star’s ships continued to wear their old colours, including Georgic. 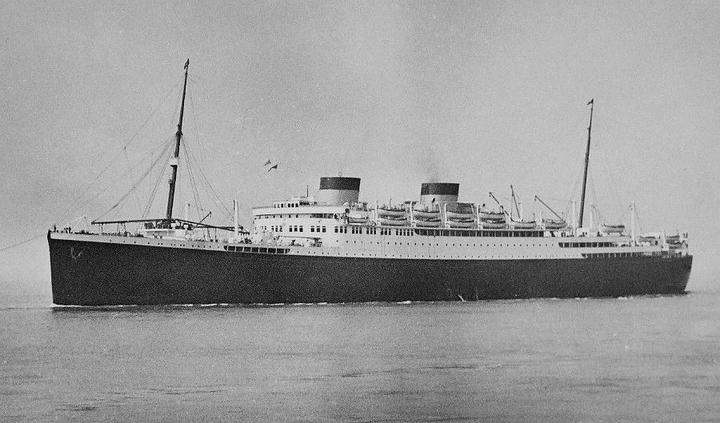 In this new company, the Georgic, together with the Britannic started to sail on the London-Southampton-New York service, and in May 1935, she made her first sailing on this route. Because she was slightly larger that the Britannic, the Georgic became the largest ship to operate in the River Thames. Cunard’s new Mauretania at 35,000 tons used the port once, but did not thereafter use it anymore, so the honour belongs to Georgic. In 1941, while functioning as a troop transport, Georgic sailed to Port Tewfik in the Gulf of Suez with the same British naval convoy that hunted and sank the German battleship Bismarck. While at anchor, German aircraft spotted the the Georgic and bombed her. She was was hit twice, and the stern of the ship caught on fire as a result. The fire reached the ship’s fuel and the ammunition destroying the entire stern area. The order was given to abandon ship and the half-submerged Georgic was left to burn. Almost completely destroyed and sunk in her berth, the decision was made to salvage Georgic. 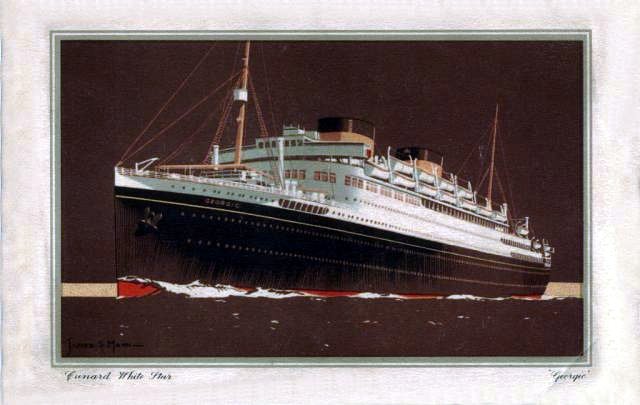 The next month Georgic was raised, and two months later temporary plugging of the hull was completed. She was towed, stern first, to Port Sudan where she was made seaworthy. A year later she had arrived in Bombay under her own power and hull rebuilding was completed. In January 1943, Georgic left Bombay for Belfast back to Harland and Wolff for a complete refit.

When completed in December 1944, the exterior had been completely redesigned. The fore funnel and aft mast had been removed and the forward mast was shortened. During the last year of the war, Georgic served again as a troop transport in Italy, the Middle East, and India. Her last war duties continued until 1948. 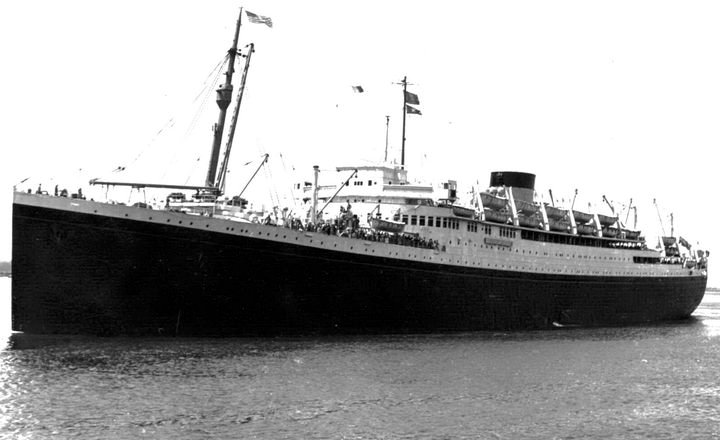 Georgic returned to passenger service sailing under he Cunard White Star flag. Being the last White Star Line vessel she was allowed to fly the WSL burgee. The Georgic was offered for sale in 1955, and in May she was chartered by the Australian Government. The last voyage ever completed in service for the Georgic was on November 19, when she carried 800 troops between Hong Kong and Liverpool. In December she was laid up at Kames Bay at Isle of Bute, and in January 1956 she was sold to the Shipbreaking Industries Ltd. at Faslane where she arrived one month later. The last of the ships built for the White Star Line had finally come to rest.