Up a Sleeve: The One Shot MKII 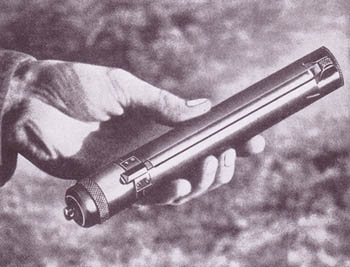 The world of cloak and dagger has always captured the imagination. Suppressed pistols, garrotes, ice picks and Black Jacks, all the tools of silent warfare. Whether its removing a sentry or assasination, being quiet often means surviving to fight another day.

One quiet kill weapon of World War II was the Sleeve gun. Essentially a one shot weapon, the flashlight looking gun was one long suppressor with a single round seated at the end.

Given its name, the Sleeve Gun was designed to be concealed up a sleeve and brought to your palm when ready to use.

While effective of to a few yards, the quiet Sleeve Gun was primarily employed by pressing directly against a target.

Just over eight inches long, the Sleeve Gun weighed about 26 ounces loaded. The ammunition for the single shot weapon was standard .32 caliber pistol cartridge of the day.

The bulk of the gun was the suppressor itself. The inside of the 1 inch diameter tube were a series of metal baffles and rubber or felt disks. Theses would slow and trap much of the expanding propellant gases from the .32 caliber round. The final quieting of the weapon was achieved by pressing it directly against the target.

Loading was achieve by unscrewing the bottom of the weapon, not unlike a flashlight. A round was seated in the butt assembly and was screwed back into place.

Firing was achieved as the gun was slipped from the sleeve to the palm. Sitting in one's hand, the thumb would naturally fall to a small button mounted on ventrally near the muzzle. Pulling back and then down on the button disegnaged a simple safety and fired the pistol.

Supremely simple, the Sleeve Gun could be used a few times before the baffles and washers inside the suppressor would become worn out by the propellant gases.

Ya gotta love those Spy goodies! . . . Any "records" as to how often and for how long it saw actual use???

cool, like a ww2 version of the weapon used in no country for old en.