Via the North Pole!

Today, a glorious airplane, a striking symbol of the international "range race". 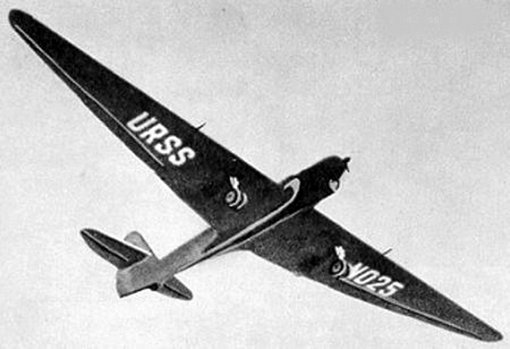 The ANT-25 was designed as the result of a recommendation by Kliment Voroshilov (the head of Soviet People's Army & Navy Commissariate) to the RVS (Revolutionary Military Council) on December 7, 1931, to build an aircraft for long range flights. The aircraft was designed by the brigade of the Experimental Aircraft Design Department of TsAGI lead by Pavel Sukhoi under the overall supervision of Andrei Tupolev. The first prototype, designated Experimental airplane RD-1, (also designated TsAGI-25, ANT-25), RD standing for Rekord Dalnosty, i.e. "Range Record") made its maiden flight on 22 June 1933, piloted by Mikhail Gromov and used a direct drive M-34 engine. The first crew, Gromov, Filin and Spirin, began with a long range test flight in September 1934 on the second prototype, the RD-2. The RD-2 used a geared M-34R engine, which substantially increased its range. They spent 75 hours in the air, covering 12,411 kilometres (7,712 mi) in a single trip, (Moscow — Ryazan — Tula — Dnepropetrovsk — Kharkov). The aircraft was unable to return to Moscow due to a fuel shortage. Gromov was made a Hero of the Soviet Union. The flight was not recognised as a world record as it could not complete the circuit to Moscow, so could not claim the closed circuit record, while the direct distance between Moscow and Kharkov was too short for the distance in a straight line record. Gromov and Yumashev decided to make their next long-range flight an attempt at the straight-line record. They wanted to fly the traditional long-range route via Africa and the Atlantic Ocean to South America. A crewman, Sigizmund Levanevskiy, on studying some maps, suggested they fly in a completely different direction – to the north. Polar aviators were extremely popular at that time, his plan was considered plausible. The flight was cancelled in the spring of 1935 when he fell seriously ill.

The next long range flight planned, was from Moscow to the USA via the North Pole. A sloping concrete runway 4 kilometres (2.5 mi) in length, was built at Schelkovo air-base near Moscow. In the early morning of 3 August 1935, Levanevskiy, Baidukov and Levchenko climbed aboard their RD and took to the air. For the first 50 kilometres (31 mi), the aircraft ascended to only 500 metres (1,600 ft). They then steadily increased their altitude to 5,000 metres (16,000 ft), maintaining an average speed of 165 kilometres per hour (103 mph). After approximately 2,000 kilometres (1,200 mi), an oil leak was discovered but the aircraft was able to make an emergency landing at Krechevits near Novgorod. Levanevskiy was called to a Politburo meeting, where he blamed Tupolev, declaring that his single-engined ANT-25 was under-powered. It seemed to be the end for the aircraft. His second pilot Georgy Baidukov, who was also an aviation engineer, disagreed and proposed Valery Chkalov for a second attempt. Chkalov was at first sceptical about his selection, as he was a fighter pilot with little navigational knowledge. Baidukov briefed Chkalov on the finer points of flying the ANT-25 and proposed Aleksander Belyakov, who was the chief instructor of their flight academy, as their third crewman. Chkalov's authority was enough to convince Stalin. 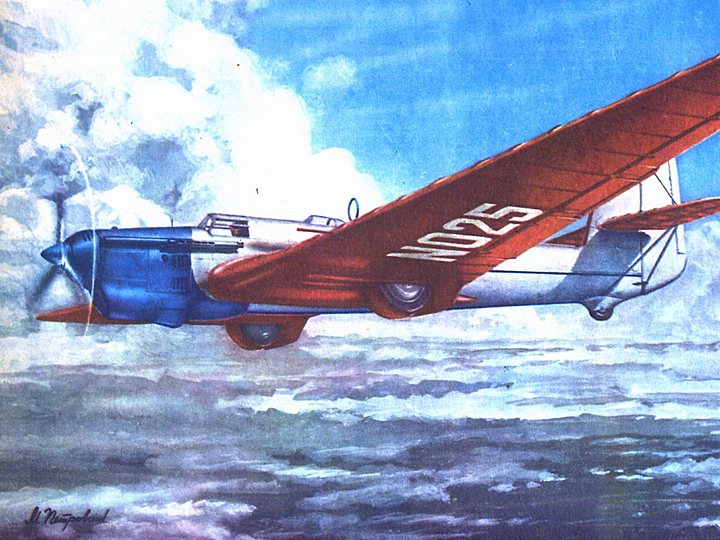 In July 1936, the record was broken by Chkalov, Baidukov and Belyakov flying the same aircraft from Moscow to the Far East (Stalin's Route) in 56 hours 20 minutes; a distance of 9,374 kilometres (5,825 mi). They passed Franz Josef Land — Severnaya Zemlya — Tiksi — Yakutia — Petropavlovsk-Kamchatsky — Khabarovsk — Okhotsk Sea and landed on a beach at Udd island (now called Chkalov island), near the Amur River. The next day, Pravda newspaper published a leading article "Glory to Stalin's Falcons!" A wooden runway was constructed on Udd island and on 2 August, the ANT-25 departed for Moscow. The trip back lasted a week with stops at Khabarovsk, Chita, Krasnoyarsk and Omsk with a grand welcome at each. Chkalov's trio became Heroes of the Soviet Union. Two islands nearby were renamed after Baidukov and Belyakov. 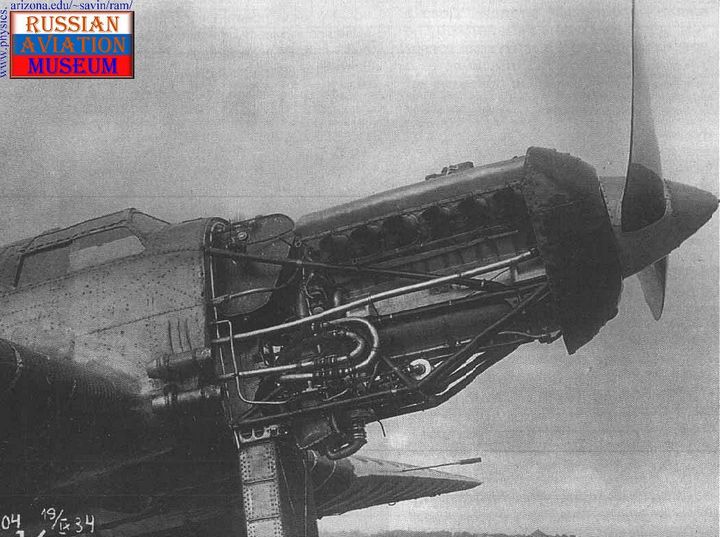 Chkalov's achievement became world-famous, however, the Politburo still wanted the publicity of a direct flight. Gromov was ordered to fly to Brazil on 14 August 1936 in a second ANT-25, but as he prepared for the start on 25 September, Brazilian officials denied access to the Soviet plane and the flight was cancelled. 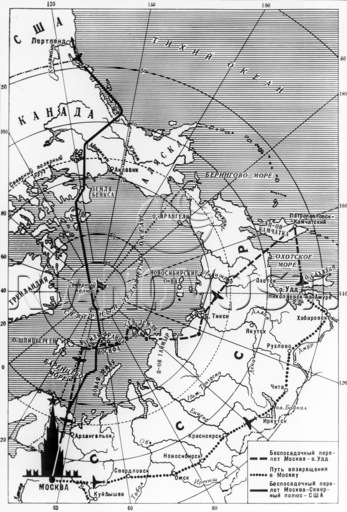 Map of the second Transpolar flight

(route marked with bold black line, Moscow at the bottom, Portland OR at the top)

Both Chkalov's and Gromov's crews were now destined to fly north from Moscow to San Francisco. Over 18-20 June 1937 - the same crew of Valery Chkalov, co-pilot Georgiy Baidukov and navigator A. Belyakov made a non-stop flight from Moscow to Portland, United States, in bad weather. At the 60 hour point they passed Seattle, after two more hours they passed Portland lighthouse on the Columbia River and headed deeper into US territory. Over the city of Eugene they found they were short of fuel and turned back for the military airbase at Vancouver, landing at Pearson Airfield. The 9,130 kilometres (5,670 mi) trip took 63 hours and 25 minutes. In 1975, an obelisk was erected on the airfield to commemorate this event (see detail below). 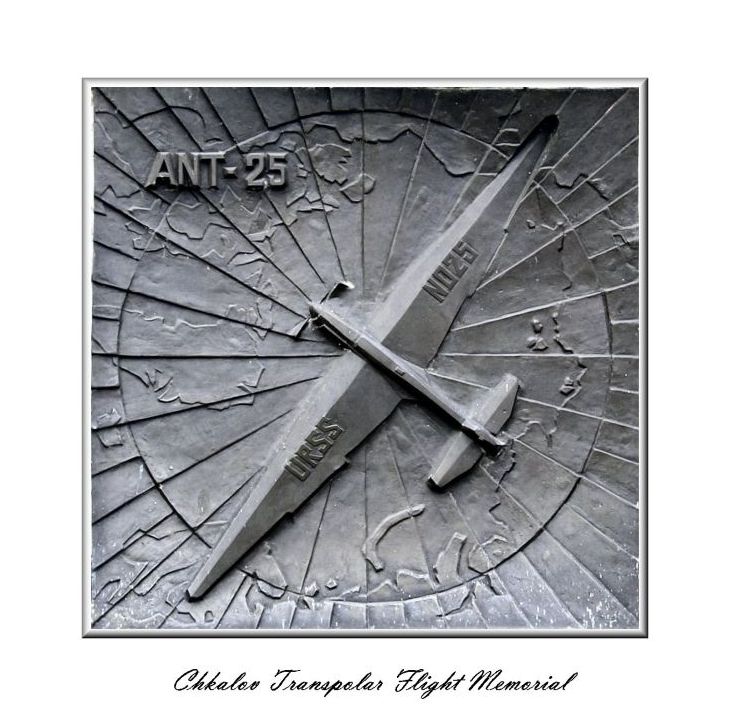 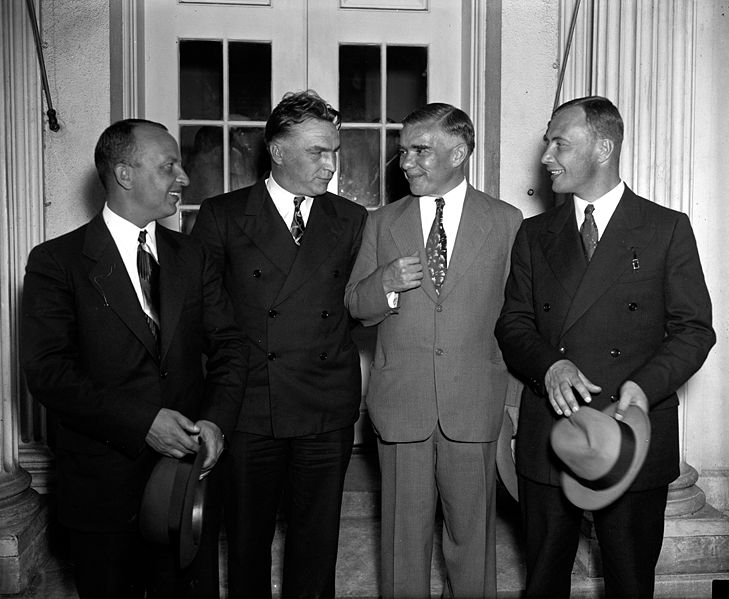 ANT-25 crew after being received by President Roosevelt

Another widely publicized feat was the Moscow - San Jacinto non-stop flight in a backup aircraft just three weeks after Chkalov's. This jourmey, via the North Pole, covered 11,500 kilometres (7,100 mi). The crew, still composed of Gromov, Yumashev, and Danilin, flew for 62 hours and 17 minutes between 12 and 14 July 1937. After landing, the aircraft still had sufficient fuel for approximately 1,500 kilometres (930 mi), enough to reach Panama. This would have involved crossing the Mexican border without the permission of FAI sporting officials. The record set by the Soviets was broken by two British Vickers Wellesley bombers which flew from Egypt to Australia in November 1938; a distance of 11,523.9 kilometres (7,160.6 mi). The USSR did not continue the race, aviation design bureau works stalled due to repression. Tupolev was jailed, Gromov was also on the brink of arrest. Chkalov crashed while testing a new fighter on 15 December, 1938.

The main reason for the aircraft's success was due to the wing design. The wide-span wings gave the aircraft good range and fuel-efficiency, they could also house large fuel tanks. The proportion of the wingspan to the chord was more than a factor of 13. Fuel was 52% of the take-off weight, the tanks had been moved from the fuselage - this allowed the wings to tension as fuel weight opposed the aerodynamics forces.

Research was conducted into special forms of vibration of the aircraft because of the longer wings and at a speed greater than some critical point - the so-called flutter effect. To stay afloat after ditching, the ANT-25 used air-filled bags made of rubberised fabric. According to the archives, the idea of a military variant of the RD first came to the engineer Zhemchuzhin of the 7th sector of the Soviet Air Force Scientific Research Institute. Its slow speed, low altitude, poor maneuverability and large wingspan made it a perfect target for fighters and anti-aircraft guns. 10 ANT-25 bombers entered service in 1936. Next year, they were grounded and never saw combat. 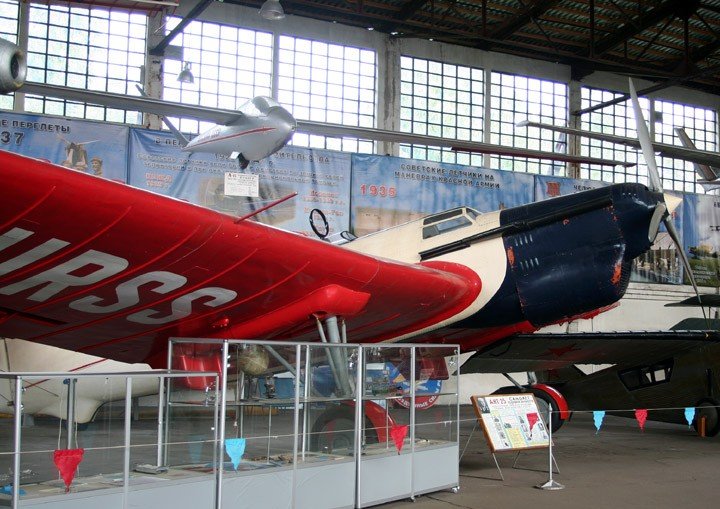 There's no Roosevelt in the picture, by the way, just Ambassador Troyanovsky with the crew.

I've seen it when i was at Monino museum. ANT-25 is very, very impressive, and it looks as swift as a fighter plane.

Great article, lord_k, and very good photographs of Chkalov and his crew with Stalin and Roosevelt.