Rocketeer getting a sequel, maybe?

One of Disney’s most underrated films, The Rocketeer, is finally getting the respect it deserves. The Hollywood Reporter says the company is prepping a brand new sequel/reboot called The Rocketeers and the new hero is an African-American woman. Read more at io9.…

Hi everyone, it's been a while. I just wanted to say that I've rebuilt my OTR archive at Dieselpunk Industries. Currently there are 23,849 episodes available to listen or download. Below is a screen shot of the website and update list.

I saw this and went squeeeee.

The Tesla Watch goes with your steampunk aesthetic. With a weathered-brass look on all the metal parts, this analog watch features a leather strap. The highlights of this design, however, are the two faux vacuum tubes…

Make your own Shadow Radio

Several years ago I ran across a Majestic Charlie McCarthy Radio at an antique store. It was a midget radio with a plastic, or more likely bakelite moulded image of Charlie. They also did models featuring the Lone Ranger and Rudolph. Today each of those radios could bring up to $500- $1,000 at auction, maybe more depending on condition.… 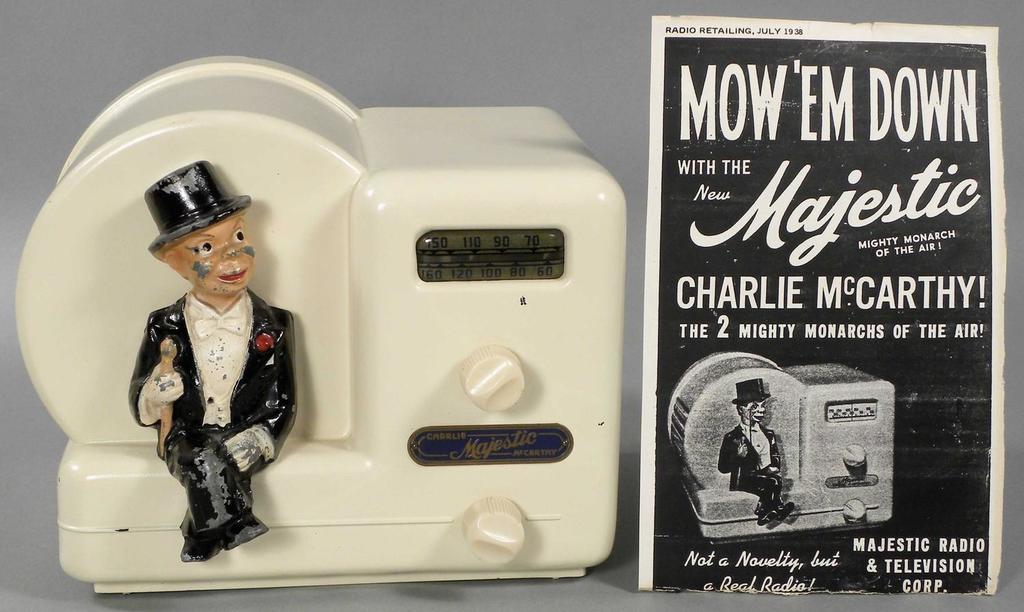 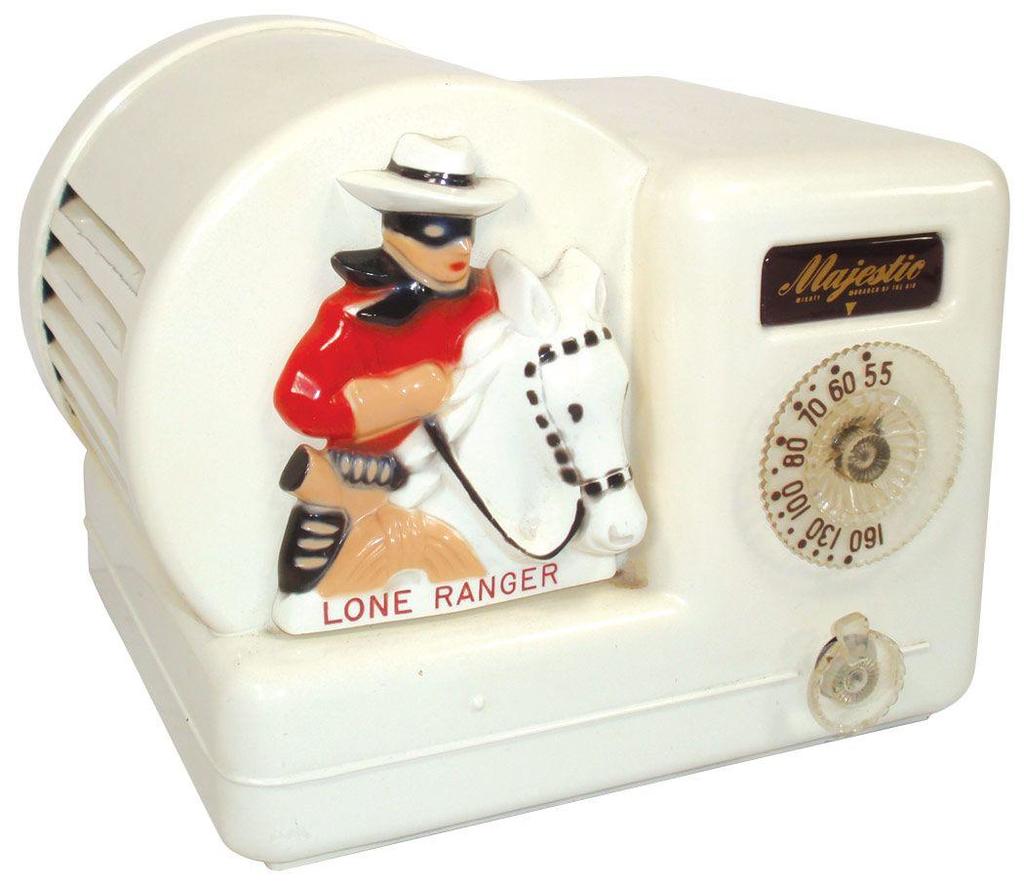 The pilot episode for the mini series The Man in the High Castle is now available on amazon.com. I read the book back when I was in college, and to be honest I don’t remember much of it. However speaking for what I saw in the pilot it’s one of the most amazing things I’ve ever seen on “TV”.

For those unfamiliar with the story The Man in the High Castle is set in an alternate world of 1962 where the Allied forces lost the second world war, and as a result the…

Hope you had a good holiday. I just added the The Adventures of Captain Marvel to Dieselpunk Industries TV. http://www.dieselpunkindustries.com/dpitv. I also created a trailer for it. Think of what it would be like if Christopher Nolan and Hans Zimmer were making serials back in 1941.… Tome and I talked about this a while back and I thought it was time to let you folks in on it.

After having discussions with friends who’ve “cut the cord” with their cable company I’ve discovered that a lot of them miss watching random stuff on TV. What I miss, especially with…

Set in the distant future, the series followed the adventures of a group of fighters for truth and justice, the Video Rangers, led by Captain Video. The Rangers operated from a secret base on a mountain top. Their uniforms resembled United States Army surplus with lightning bolts…

Do any of you wonder what a movie trailer would be like if you used footage from the 1936 science fiction film Things to Come, combined with a contemporary Pacific Rim style soundtrack? So did I. The Nessie Microphone by Blue

The other day I got my Nessie microphone from Blue. The Nessie is an entry level $99 USB cardioid (unidirectional) mic with a built in shock mount, pop filter, serpentine neck, and non latency headphone jack. What all of that means is that it is probably the best entry level USB microphone you can get for the price. It's aimed at podcasters, folks who do presentation voice overs, and people who want their Skype chats to sound really…

Taken from the comic plus: The other, other "Great Detective", Dixon Hawke (although fans would say Hawke was a better read than Sexton Blake) appeared in The Dixon Hawke Library in 1919, which ran 576 issues till 1941. His adventures also appeared in the subsequent Dixon Hawke Case Books, plus the weekly paper, "Adventure" and in the Sunday Post. The library issues were smaller than pocket libraries.…

Hi everybody. I've been working creating a Roku channel for Dieselpunk Industries. I've submitted it for approval to the Roku channel store, but after reading Roku's three and half pages of requirements I don't know if that's ever going to happen. So in the meantime if you have a Roku device you can add the channel with the URL below. It might not show up immediately on your device, but if you update your Roku player's setting it should include the newly added channel.…

In the aftermath of Pacific Standard Time (PST), a uniquely successful collaborative project of exhibitions, public programs, and publications which together took intellectual and aesthetic stock of southern California’s artists, art scenes, and artistic production across nearly the entirety of the post-World War II era, the Getty launched an initiative with a tighter focus on architecture during the same era.  “Pacific Standard Time Presents: Modern Architecture in L.A.” has as one of…

While I was looking for some design inspiration at the Digital Comic Museum. I discovered a couple of old Captain Video RCA record jackets (see below). On the back were some punch-out paper toys. So I thought it would be cool if I made my own paper toys, not so much inspired by Captain Video but more by Dave Stevens' Rocketeer.

Thanks, again Steve... you were, and still are one of the best.

I plan on making more of…

While I was googling something I found something awesome by mistake. It's a podcast called "The Thrilling Adventure Hour" It's like A Prairie Home Companion meets the Goon Show. I found an NPR Story on it here. They've had guest stars like Nathan Fillion (Firefly), Neil Patrick Harris (Doctor Horrible), Danny Pundi (Community), and Jorge…

Normally I'm not a big fan of fan made trailers but this is one of the most impressive one's I've ever seen.

Back in 2005 I created archiveclassicmovies.com to post my old movies. Since that time I've added almost 500 old movies, serials, shorts, and cartoons. With that much content it's been difficult to update, and poor ACM has really been neglected the past couple of years. I've finally developed a CMS that will let me more easily update my content, so I'm going to retire ACM, which will become dieselpunkindustries.com.

Currently the preview of dielsepunkindustries.com has…

I don't know how good it's going to be but from seeing the visuals I have to say HOLY CRAP!!! If nothing else the movie looks beautiful.

Why I love old time radio, a short video.

Hi all, while I was cataloging some of my radio shows I ran across an episode of the Halls of Ivy I hadn't heard before. I've posted stuff here about this show before, if you're not familiar here's a brief rundown. The show first aired in 1950 and revolved around the small college of Ivy that was presided over by it's President Dr. and Mrs. Hall. Played by Ronald Colman and his real life wife Benita. It was written by Don Quinn who was also the head writer for Fibber McGee and Molly. In the… Sonora began as the Sonora Chime Company back in the early 1900s, they made chimes for clocks. Later it became the Sonora…