The spring loaded handle on the top, and bullet style knobs are all original. The dial gives off a warm, orange, glow when the radio is switched on. If you notice the speaker design it's comprised of eight fins that taper down too the lefthand side. As…

I was on Etsy looking for something for a friend and I ran across this 1952 Westinghouse Little Gem or Refrigerator radio. 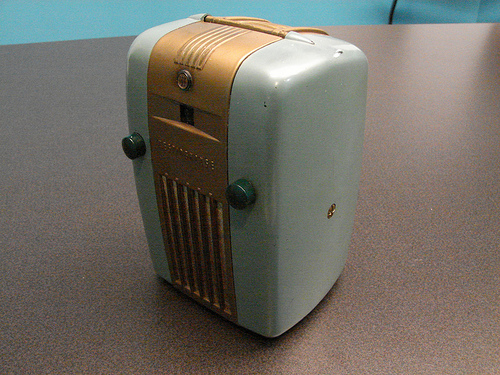 It was labeled "Little Gem" by Westinghouse, but because it looked like a little refrigerator the "refrigerator" name stuck. Personally I think it looks like a fancy, retro, napkin dispenser.

This is one I got on ebay for about $50, the one on Etsy.com is currently selling for $350. Sure there is about a 700% difference in price however mine…

The  trailer for the John Carter is out. They are going with John Carter and not the full title of the first book A Princess of Mars. I don't know if it falls under dieselpunk genere per se but there are definitely some art deco elemets in the trailer, which looks beautiful by the way. I really like the Edgar Rice Burroughs books and I hope the movie does them justice.

The link to the trailer is below, they also have some artwork from the movie available for download on the…

At the Flying Legends Air Show near Duxford over the weekend a P-51 Mustang collided with a Douglas A-1 Skyraider and crashed. The Skyraider suffered only minor damage. The Mustang's pilot bailed out and no one was injured, it's still very sad to loose one of the P-51s.

Below is a scene from one of my favorite movies of all time Empire of the Sun, Featuring the…

Dan Turner, Hollywood Detective was the creation of pulp author Robert Leslie Bellem (1894 or 1902 -1968).  The Dan Turner stories took place against the Backdrop of the Hollywood studio machine of the 1940's,  written in the first person with a thick, racy, slang.


"His carcass hadn’t stopped bouncing when I piped a bleached blonde quail barging toward me from a window embrasure in the back corridor where she’d been hiding. She was carrying a Leica minicam equipped with a…

Being an illustrator the rule is same for everything else you do, if you want to get better you have to practice, practice, practice. So with the theatrical release of Captain America coming soon, I thought it would be a good exercise to see if I could re-invent one of the worst (and this is just my opinion) super hero emblems ever. I wanted to take Captain Midnight's chest shield, and see if I could make it look like a cool, modern, summer movie poster. If you're not familiar with Capt.…

The Trailer is up at trailers.apple.com.

The movie looks to have kind of post apocalyptic / dieselpunk / darker "Firefly" western feel to it. Here's the summary from the trailer site.

Rip Discovers Radio is a play on the Rip Van Winkle story where Rip wakes up on a park bench in Central Park 100 years after a big celebration of Admiral Dewey's victory in Manila Bay. He later meets a beautiful young lady who shows him all the marvels of modern RCA technology.

Rex Steele was a short animated student film created by Alexander Woo in 2006 for his senior project. It's run time is just under 11 minutes and is told in a classic serialized fashion. The music was by Ryan Shore and is reminiscent of John Williams "1941" and "Indian Jones" soundtracks.

The DVD is out of print and is tough to find. The sound track is available on iTunes.

Crosley Motors Incorporated was created by Powel Crosley Jr. in 1939. Before that he had built his fortune making affordable radios. Rumor has it that he was disturbed by the $120 price tag for a radio he was going to buy for his son, so he set out to create a radio that anybody could afford, which he did. The average price of a Crosley radio was $7. He later moved on to refrigerators, and then… Continue

Hi Everybody,
I'm not sure if this is dieselpunk or not but I'll risk it to tell you about one of my favorite radio shows "The Halls of Ivy". "The Halls of Ivy" ran from 1950-1952 and stared Ronald Colman and his wife Benita Hume. It was created by Don Quinn, one of the co-cretors/writers of Fibber McGee & Molly. What separated this show from most radio comedies of the day was that it was a "smart" program. Don't get me wrong I like the sound of stuff falling out the closet on Fibber… Continue

I found this at the Digital Comic Museum and thought it was kind of cool, and unusual. Here's brief description from the scanner.

A little word on this book... It was an experiment in publishing, combining pulp sci-fi prose stories with comics. It is in the pulp fiction format (132 pages) with 32 of those pages being comics. Art is by Joe Kubert and John Giunta, and the prose… Continue

Taken from Wikipedia
The Holden Efijy is a concept car created in Australia by Holden. It is based around the iconic Holden FJ, the second model built by Holden. The concept is based on the Chevrolet Corvette floor pan, a 6.0 litre V8 engine with Rootes supercharger putting out 480kW at a little shy of 6500 r.p.m. It rides on an air suspension system that sits down when stopped, and also has electronic instrumentation including a… Continue

"Gasbags" is WWII British comedy staring the Crazy Gang (Bud Flanagan, Chesney Allen, Jimmy Nervo, Teddy Knox, Charlie Naughton and Jimmy Gold). Filmed during the Battle of Britain the story starts with the gang as enlisted men in charge of barrage balloon placement for the Kenningwood section. After they are discovered by their Sgt. Major using their balloon to drum up business for their fish stall they are ordered to remove the balloon from the roof of their shop, but not before a powerful… Continue

Since the last movie I suggested, "The Mutant Chronicles", was far from what anybody would consider good. I thought I should post about one my personal favorite films "The Fall". Directed by Tarsem Singh.


Summary from IMDB:
In a hospital on the outskirts of 1920s Los Angeles, an injured stuntman begins to tell a fellow patient, a little girl with a broken arm, a fantastical story about 6 mythical heroes, the ex-slave, the… Continue

You'll notice immediately the dieselpunk theme of the show during the credits. The story is about a Teenage girl, Constance Payne and her Father Doc Payne.

If you watch it check out the the name of the girls High School.

Here's the summary from the creator Micah Wright.

Constant Payne is an animated pilot created by Micah Wright for Nickelodeon in 2001. It was designed to compete against Toonami on Cartoon Network. The pilot tested well, but never made it to series… Continue

Summary from the Denverpost.com

These images, by photographers of the Farm Security Administration/Office of War Information, are some of the only color photographs taken of the effects of the Depression on America’s rural and small town populations. The photographs are the property of the Library of Congress and were included in a 2006 exhibit Bound for Glory: America in… Continue

The Mutant Chronicles released back in 08... well some say released, others say escaped is a dieselpunk puree of WWI and WWII aesthetics, plus some of Fritz Lang's "Metropolis", and Alexander Korda's "Thing's To Come" thrown in for good measure. The movie was shot almost entirely digitally, and looks very similar in color and style to Kerry Conran's "Sky Captain" released four years before.

Is it a good movie? That all depends on how picky you are. It only got 16% on… Continue