A Stab in the Dark - The Night Pistol On the subject of rare variants of Georg Luger's pistols, consider his flashlight assisted pistol. Today there are two of these known to exist. They were used by the personal bodyguards of Adolph Hitler and were called the "Night Pistols." Besides illuminating the darkness, they were loaded with tracer rounds which made them an awesome and terrifying night weapon. This custom made Luger is accompanied by a unique & very unusual, precisely machined, anodized brass flashlight made to slip over the end of the barrel with about 3/4" ears that fit over each side of receiver & rest on receiver rails. 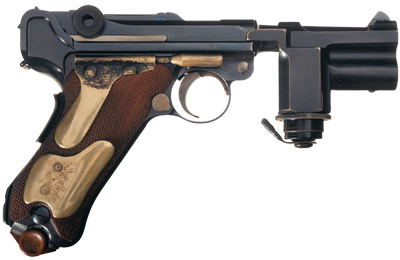 This flashlight has its lens directly below and aligned with the axis of the bore with battery pack in a rectangular base at rear with a clip attachment for a wire to plug into a brass socket that is connected to a brass plate at top front of right grip. There is another brass plate riveted in place at bottom of right grip, all of which are connected with brass plates fitted into milled recesses inside grip so that when a person grips the pistol the skin conductivity makes a connection & illuminates the flashlight.

It is believed that the flashlight & battery pack were carried separate from the pistol, probably in its own leather pouch. 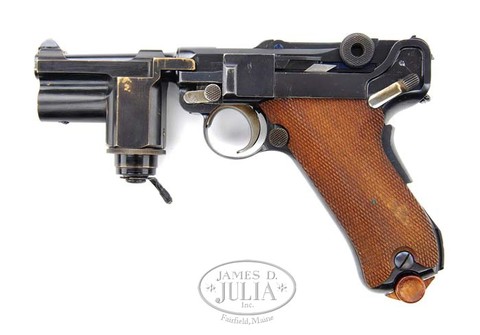 In Peter Hoffman's book “Hitler's Personal Security,” he mentions the existence of these 30 cal night pistols with tracer ammunition & flashlight used by an RSD officer in constant patrol around the Fuehrer's bunker. How rare? Two of these flashlight pistols are known to exist. One is in the hands of a private collector and the other is on display in a military museum in Munich, Germany.