Allies Called it the Pneumatic Hammer The modern battlefield has a diverse variety of crew-served weapons, from machine guns to grenade launchers. Its the latter category, exemplified by the AGS-17 and MK-19, that have a lineage going back decades, including to a weapon of a different class but many similarities.

The Rheinmetall MK-108 was a 30mm German aircraft cannon that was a marvel of compact size and design and not unlike those modern crew-served grenade launchers of today.

The automatic aircraft cannon was created as a cheap, easy to manufacture system that would inflict the most damage with minimal number of shots. The MK-108 had 15 types of rounds developed for it, but most commonly fired 30 x 90mm 'Mine Shell,' essentially a high explosive fragmentary round, and an incendiary shell. The direct-blowback MK-108 had at a rate of fire of 660 rounds per minute.

Just over 3.5 feet in length, the MK-108 weighed roughly 100 + pounds and was primarily made up of stamped parts. While some machine gun systems were heavily machine from muzzle to butt stock, the MK-108 had 80% stamped metal parts. 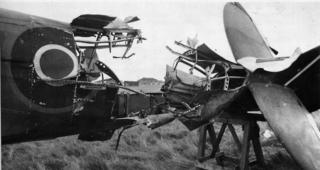 The MK-108 was mounted in several different Luftwaffe aircraft, most in forward facing configurations with some MK-108s fixed vertically to fire on the belly of Allied bombers as fighters passed underneath. Post war British testing of the MK-108 showed devastating effectiveness, capable of easily splitting wings and fuselage with obvious lethal effects. The Luftwaffe estimated four to five MK-108 rounds could bring down a B-17, a quarter of what other German aircraft weapons would have to land to achieve destruction.

The MK-108 main short coming was its low muzzle velocity, between 1,300-1,700 feet per second, reducing its range and accuracy because of sizable round drop. For the weapon to work best, a pilot needed to get a quick burst on a target at relatively close range.

The comparison to the modern crew-served grenade launchers to the MK-108 are numerous, from general caliber effectiveness, weapon size and weights. It's not improbable to imagine an ambitious weapons engineer pull the MK-108 from German aircraft and reconfigure it for land use.

Comment by Jake Holman Jr. on February 3, 2011 at 11:16am
Deven- You are correct, naval weapons designation is MK. The MK-19 automatic grenade launcher was a design product of the Naval Design Center and brought into service carrying the MK designation. When the Knights Armament 7.62mm rifle entered service in the past decade, it was brought into service through United States Navy channels and picked up the designation MK-12.

I was told that the "MK" portion on weapons means that they were developed for the Navy originally. Each branch has a similar code, i.e., the army is "M", for the M-16, M203, M2, and M9. Do you know if this is true? I was told this by a Navy Chief, I think, and I've always believed it true, but you may be the guy to know for sure.

Comment by Darren Raleigh on February 2, 2011 at 5:37pm
Crikey.  Reminds me of that horrible thing they saddled Honor Harrington with in "On Basilisk Station."  Would bring down anything but you had to get to knife-range to use it.