The Hotchkiss Universal Type submachine gun wasn't anything special in how it operated, a standard direct blowback weapon. But in 1949, fresh off the lessons learned from World War II, French engineers wanted to create something that could be a jack of all trades, reliable, light and compact. A weapon that could be used by vehicle crews or paratroopers.

Chambered in 9 x 19 the Hotchkiss UT was put together like a jigsaw puzzle that could go from fully deployed weapon to compact and maneuverable. Today we image a simple throw of a locking toggle or rotating a washer. The Hotchkiss UT was a bit more complicated, therefore not quite as quick deployable as designers imagined or troops could want.

The UT had an under folding tubular buttstock, pretty standard arrangement for SMGs then and now. But then the designers went further. The sheet metal pistol grip then folded forward, covering the trigger loop. The magazine well could then be disengaged and pivoted forward, with the magazine slid further back along the underside of the UT. 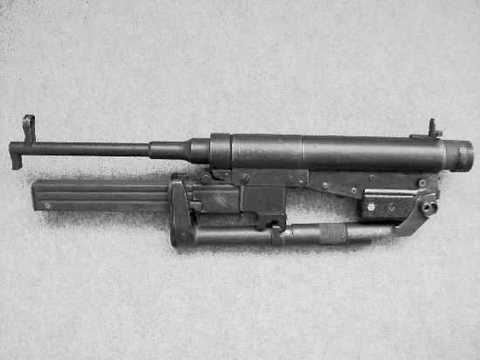 The final and most unusual collapsing feature on the Hotchkiss UT was its telescoping barrel. The 10 inch barrel sat in the receiver just over a latch that could be flipped allowing it to be slide back into the receiver against the bolt face.

When completely folded and collapsed, the Hotchkiss Universal Type was barely over 17 inches in length.

Compact and complicated, the Hotchkiss UT never gained much popularity outside of the French Foreign Legion paratroopers. But it showed how even once immovable components of a firearm could be flipped, folded or retracted, if a little ingenuity was applied.

D.T. McCameron: The idea is novel, but poorly executed. Its an example of the old saying, complex plans drawn up in a comfy office rarely work in the chaotic field.

BandNerd51: Interestingly, on 9/17 I'll be featuring a cousin of the M6 right here.

Grip does not look comfortable, but I can appreciate it folding over trigger loop.  I don't know what to think of a telescoping barrel, save that it doesn't sound like a great idea.

I agree with BandNerd51, it seems more a handy and compact survival weapon than it does a quickly deployable SMG.

Fun to think of, though, small as it is when collapsed. 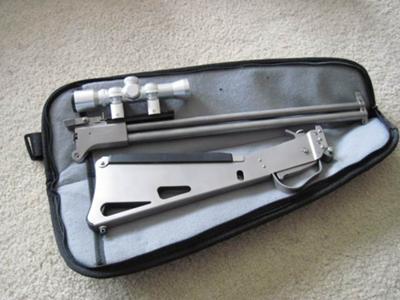 I've never seen this one before, but I was very impressed with the fold away feature of this SMG. It seems like it would make for a rather handy item to keep in a cockpit as a "Just In Case". Very clever!