If you're a gun geek like me, something small, the littlest thing about a weapon can excite you. Sometimes its the method of operation, other times its the inventive way they solve weight or size issues.

For me the Argentinian Halcon M-1943 has a great stock. Yes, you heard me right, this pretty mundane SMG has a slight edge because of its design. But mundanity does not mean it is overall not worth small arms praise. The M-1943 is a simple, direct blowback submachine gun that fired from an open bolt. With a rate of fire of 700 rounds per minute, the open bolt kept the fast firing SMG cool and uncomplicated.

Another interesting decision by the 1940s weapons designers in Argentina was chambering the Halcon M-1943 in the European popular 9mm Parabellum and the .45 ACP. The latter made the Haclon SMG a quality weapon in the class of the M3 "Grease Gun" or Thompson SMG.

Back to the stock of the SMG. Later versions of the weapon ditched the fixed stock in favor of the lighter, folding wire stock. But that is inelegant compared to the original fixed version that curved from the rear of the tubular receiver into a pistol grip and into a traditional wooden stock. Its a small thing, but it bridged the gap between a traditional straight line wood stock and the modern pistol grip. 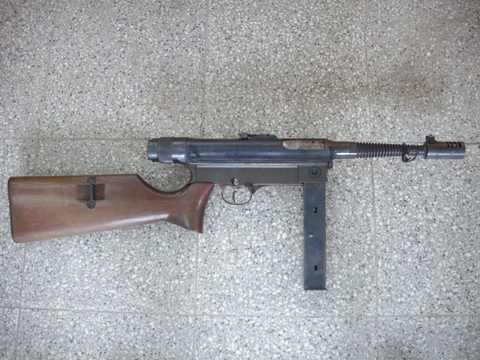 Another ergonomic attribute of this South American SMG was its placement of the charging handle. Where North American or European designers placed the cocking horn or knob, it generally went on the top or ejection port side of a gun, Halcon mounted the charging handle on the opposite, or "weak" side of the gun. This meant that it could be charged or cleared jams while the strong hand stayed on the trigger. Modern training techniques have found ways around some weapons ergonomics, but in 1943 this simple choice made the Halcon an efficient and effective design.