The Bauhaus' move to Dessau 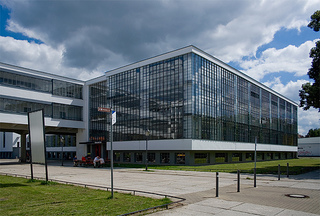 When the Bauhaus was moved to Dessau in 1925, Gropius closed his Weimar office, ending his partnership vith Meyer. His most important architectural achievement at the Bauhaus was the design for the new buildings at Dessau. These buildings, finished in 1926, incorporated a complex of classrooms, studios, workshops, library, and living quarters for faculty and students. The workshops consisted of a glass box rising four stories and presenting the curtain wall, the glass sheath/skin, freely suspended from the structural steel elements. The form of the workshop wing suggests the uninterrupted spaces of its interior. On the other hand, in the dormitory wing, the balconies and smaller window units contrasting with clear expanses of wall surface imply the broken-up interiors of individual apartments.

The asymmetrical plan of the Bauhaus is roughly cruciform, with administrative offices concentrated in the broad, uninterrupted ferroconcrete span of the bridge linking workshops with the classrooms and library. In every way the architect sought the most efficient organization of interior space. At the same time he was sensitive to the abstract organization of the rectangular exterior - the relation of windows to walls, concrete to glass, verticals to horizontals, lights to darks. The Bauhaus combined functional organization and structure with a geometric, de Stijl-inspired design. Not only were the Bauhaus buildings revolutionary in their versatility and in the application of abstract principles of design on the basis of the interaction of verticals and horizontals, but they also embodied a new concept of architectural space. The flat roof of the Bauhaus and the long, uninterrupted planes of white walls and continuous window voids create a lightness that opens up the space of the structure. The interior was furnished with designs by Bauhaus students and faculty, including Breuer's tubular-steel furniture. The building was seriously damaged in World War II and underwent limited renovations in the 1960s. In the 1970s, it was finally restored to its original appearance.

Gropius left the Bauhaus in 1928 to devote his full time to architectural practice. Until he was forced by the Nazis' rise power to leave Germany in 1934 - first for England and then, in 1937, for the United States - much of his building is in low- or middle-cost housing. In his pioneering European works, Gropius helped provide the foundation of what would later be dubbed the International Style.