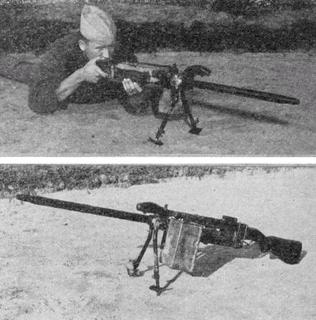 The weapon that was known as the Stinger is in fact an AN/M2.30 caliber aircraft machine gun. Essentially the twin of the M1919A4, the AN/M2 had a major different- rate of fire.

The standard ground variant of the tripod mounted .30 caliber M1919A4, seen throughout the European and Pacific theaters during World War II, had a rate of fire between 400 and 500 rounds per minute with a muzzle velocity of the .30-06 at 2,800 feet per second.

Now we look at the AN/M2, a gun system that was mounted in the rear flexible turret of Dauntless dive bombers. Weighing at 21 pounds, ten pounds less than the M1919A4 because of thinner materials for aviation use, the AN/M2 rate of fire was nearly triple that of the standard infantry .30 caliber M1919.

The AN/M2 was mounted in the rear of the Dauntless had single firing rate of between 1,000-1,350 rounds per minute. Now Marines, always looking for the best firepower, had the idea of pulling the reliable AN/M2 from a Dauntless and reconfiguring it for ground use. With a stock from a Garand, a bipod from a BAR and a 100 round belted ammo-carrier, the Stinger was born on the eve of the now famous battle for Iwo Jima.

A weapons sergeant (some say it was Stein) worked on piecing together six of these Stinger machine guns, showing good reliability and ready for combat. Five of the piecemeal beasts went to 3rd Battalion, 28th Marines. The final Stinger went to Cpl. Stein in 1st Battalion. Even with its repurposed composition, hard as nails Marines thought the Stinger could go to war throughout the Pacific. It was recommended that one Stinger replace a BAR in each squad.

A BAR has a rate of fire of around 600 rpm and weighs 24 pounds with a 20 round magazine. The Marines Stinger had a consistent rate of fire of up to 1,200 rounds per minute and a weight of 25 pounds, with 100 belted rounds of .30-06. In combat, putting twice the amount of rounds downrage, on your enemy, could be decisive.

And in the case of Cpl. Stein, that rate of fire turned the tide of battle. 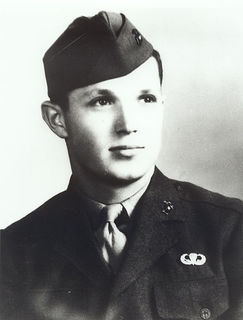 It was February 19th, 1945 and Stein's platoon was attempting to advance on Iwo Jima when it began taking concentrated machine gun and mortar fire from emplaced Japanese. Bringing the Stinger to bear, Stein drew fire from the dug in Japanese in order to locate the enemy positions not but probing pillboxes with rifle fire, but by simply standing up.

Now able to clearly see the Japanese fighting positions, Stein and the Stinger would go to work.

With this improvised weapon, Stein charged each Japanese pillbox, pouring accurate and reliable streams of fire onto the enemy. He moved from pillbox to pillbox, killing a total of 20 Japanese soldiers. But it wasn't a single sweep you see, the Stinger was a bullet hungry beast and required constant feeding.

So Stein ran back eight times to get fresh ammunition for the Stinger. Each time he ran to the rear he also aided wounded Marines to safety. Stein and the Stinger pushed forward, mercilessly assaulting the dug in Japanese throughout the battle.

Even after getting the Stinger shot twice from his hands, Stein fought on. And to fight more nimbly, Stein battled the Japanese on Iwo Jima without helmet or boots. Barefoot, the Marine fought gallantly for days.

Stein and his Stinger would meet their end in battle on March 1 when he was cut down assaulting yet another Japanese pillbox. He would earn the Medal of Honor for his bravery and gallantry in the face of withering enemy resistance.