Benvenuti al cabaret, my friends, and welcome to the new Old Italy!  And seriously, folks, we are not in Kansas anymore!  We've gone back over the rainbow and into a land of black and white where the Great and Powerful Oz seems to have swapped places with the Wicked Witch of the West. 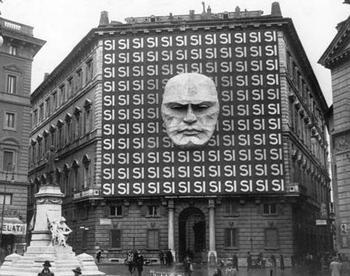 "Orders are nobody can see the Great Duce! Not nobody, not nohow!"

Needless to say this new Italian order is more than a little bizarre ever since a group of black shirted hooligans rallied around a balding ex-Marxist school teacher.  This "Fascism" seems rather full of itself with the pomp and ceremony, but to be blunt it all comes across as a new coat of paint on the same old crumbling building.  Sure, Italian aviators may be stealing the spotlight, but from ground level I can tell you that the trains are still late and the bribes need to be paid to the same thugs, only this time in fancier uniforms.  It seems to me to need a Brain, a Heart, and maybe a little less Courage.

But politics aside, we're here today in the name of International Relations as cultural ambassadors for America (that's all, really. No, seriously, this is totally not in any way a front for anything clandestine, honest!  The tiny little camera's just a toy for my nephew!).  My agent, Mr. Siegel, refused to come citing prior difficulties between this regime and his business partner Mr. Luciano, so I'm here with a nice if hard-drinking English fellow named Ian Flemming.  Ian has introduced us to one of the Duce's own sons, a nice handsome fellow named Romano Mussolini, who is quite the afficionado of American music and quite a talented pianist himself.  He, in turn, has introduced us to the local talent and tonight's main performer, the incomparable Gorni Kramer, who has managed against all reason or expectation to make an accordion swing!

As it turns out, despite Mussolinian Italy selling itself as a place of machine-like order and productivity, the Roman night life is still one the Ceasers might have recognized, a hedonistic hidden world of sex, booze, and swing.  It's here, in the back-room world of the Roman scene, that Romano introduces us to famed aviator Italo Balbo (no mere flying monkey he!) and his current lovely mistress.  I must say his personality is as big as his public image!  The man exudes a joie de vie and sophisticated confidence that makes his now famous trans-Atlantic armada flights seem like foregone deals.  It's easy to forget he was just a few years back bashing skulls with a blugeon.

And then the Secret Police arrived.

I must admit my heart skipped a beat when I saw the infamous enforcer of the Fascist regime, Arturo Bocchini himself, head of the OVRA, walk into the room.  Was I soon to face a totally fabricated, honestly, charge of espionage?  Was a black hood or windowless cell in my immediate future?

The dark hidden left hand of Fascism...is holding a cocktail!

Not so much, it seems.  Bocchini instead made a b-line for the cocktails and chorus girls!  Turns out he's as big of a part of the nightlife here as Romano or Balbo!  It's like the Wicked Witch arrived on her broom and asked about the canapes.

But without further adieu, let's move on to tonight's entertainment and tonight's cocktail (the Cardinale) so we can get out of this bizare place and back  to the states.  Seriously, it's nice in Rome, but there's no place like home!

Stir over ice and serve in an Old Fashioned or Cocktail glass with a twist of lemon.

Marone!  Il Duce's face on-a that building will make-a me not sleep!

A little masterpiece - again. Hats off to Cap'n! Loved the description of Italo B.