WET ONCE AGAIN!!!  Glory, hallelujah, America is wet once again!

Hail to Senator Blaine, hail to the Blaine Act, and hail to the 21st Amendment!  Volstead is dead, the 18th is dead, and the Fifth is back in hand [image from sidedish.wpengine.com].

For our fans outside the USA it's impossible for us here to overstate just what a collossal mess Prohibition was.  It turned average law-abiding Americans into criminals and criminals into millionaires.  Rather than ending alcohol consumption, it introduced it to a new audience, increasing its overall consumption.  Cities turned into war zones as competing gangs brought the trenches into the alleys and avenues.

And the horrendous depths the Treasury Department went to were astounding.  Illegal search and seizure in direct violation of the US Consitution, the open assassination of big name bootlegers by the FBI, even the deliberate poisoning industrial alcohol in an attempt to prevent its consuption...that last one led to countless deaths by otherwise lawful citizens who merely drank from the wrong bathtub gin bottle.

Better dead than drunk, I guess.

Then there was the accidental poisoning by the bootleggers themselves.  Quality control of illicit substances is quite a bit worse than even in Upton Sinclair's Jungle.

But man, what a party we had.

All said, the Cabaret has always been decidedly Wet and scofflaw, and feel it is more than time to crack open that stashed bottle of the Real McCoy and celebrate the long overdue death of this "noble experiment" [image from Mary Miley's Twenties Blog].

In celebration of this momentous Return to Normalcy we have on hand the great Duke Ellington who says "Drop me Off in Harlem".  Drop us off there too, pal.  First round's on me, Duke!

So Weep No More, good citizens of the United States, for good times are beer...I mean here again! 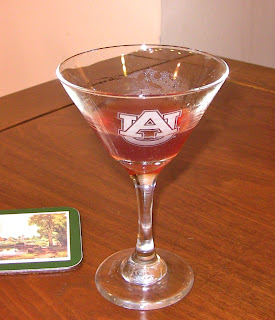 Shake well over ice and strain into a cocktail glass.

Maybe a good stiff drink will cure our nation's Depression.

Enjoy your first legal drink in over a decade, folks!!