In 1919, in the end of the World War I, the G.I. Eddie Bartlett meets George Hally and the student of Law School Lloyd Hart in a trench and sooner the war ends. Back in USA, Eddie is not able to find a job and is sustained by his great friend Danny Green, who offers Eddie to share his cab and make some money working as cab driver. Eddie decides to visit Jean Sherman, who had corresponded with him during the war and is crazy about him, and for his surprise, she is a teenager. In 1920, with the 18th Amendment, the Volstead Act is in force, beginning the period of the unpopular Prohibition. Eddie accidentally meets the owner of a speakeasy Panama Smith, they become close friends and she introduces him in bootlegging of liquor. Eddie becomes rich, meets Jean Sherman again and falls for her. He also raises a profitable partnership with George and Lloyd is hired as his lawyer. In 1924, bootlegging has a grown from individual effort to a big business associated with corruption, violence and murder, and the light machine gun Tommy becomes an important tool in this business. Lloyd and Jean fall in love for each other, and Eddie has a great deception. Later, on 19 October 1929 with the Black Tuesday, Eddie looses all his fortune, and when the Prohibition falls after thirteen years in force, he returns to the activity of cab driver. On the Christmas Eve, when he meets Jean again as a client of his cab, his life is leaded to a tragic end.


Click here to watch "The Roaring Twenties" in full 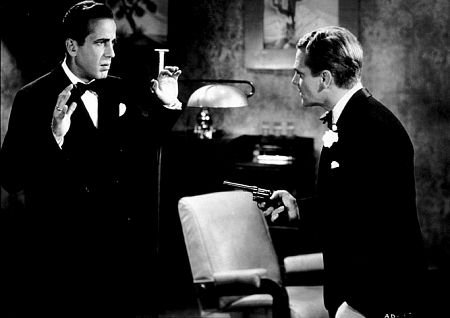