Good Co. swings it with their new album, The Kicker

Electroswing me brother, with a solid four.

Things are looking bright for Good Co with their second studio album, The Kicker. Following on the smoking heels of 2013’s Electro Swing for the Masses, this sophomore album corrects some of the flaws with its predecessor and spreads out in new & unusual directions.

If you’re just finding the Good Co sound, then you’re in for a treat. Fronted by jazz-man Carey Rayburn, this American electroswing band is an assembly of Abney Park alumni, traditional brass players, torch singers, and swing aficiantos spiced with modern breakbeats and retro synth sounds. 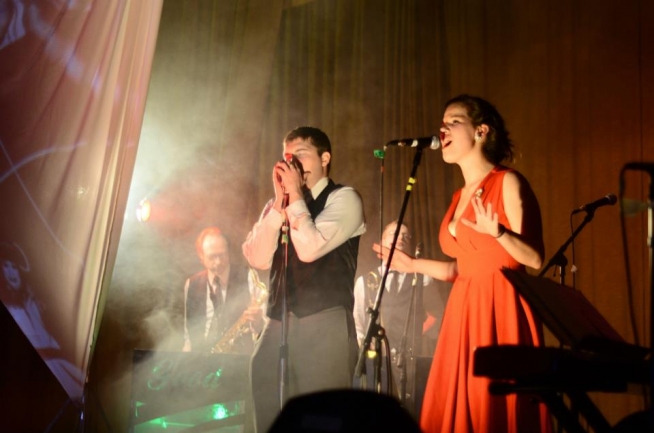 In The Kicker, Carey and company bring their aural medley together with twelve new tunes stretching from the steampunk-inspired “Through the Door,” to the 1950s cabana beats of “Getaway,” and back again to 1920s with the gospel-inspired “In The Water.”

If you’re looking for more of the same, don’t worry. You’ll have a few songs to grab onto, but this is definitely an evolution from Electro Swing for the Masses. The Kicker brings in different beats, different styles, and different singers, showing the world that Good Co isn’t a one-trick pony. While this approach may not produce a signature sound for the band just yet, it shows us that the group is well trained and comfortable with a wide breadth of techniques not normally found on the contemporary market.

If they can keep the fires stoked and continue to evolve as shown in The Kicker, I have no doubt Good Co will be able to stand the test of time.

For more information about Good Co, check out our interview with Carey Rayburn on Dieselpunks