Try to remember... No? OK, I'm not playing games any more. It's a photocollage. Such structures exist but not in Moscow, built much later. But they stem out of 1920s proposal made by El (Lazar) Lissitzky (1890-1941), a giant of Russian and international Avant-garde. In a week or two we'll have a good chance to talk about Lissitzky multi-faceted personality, his influence and heritage. Now, let's talk architecture. 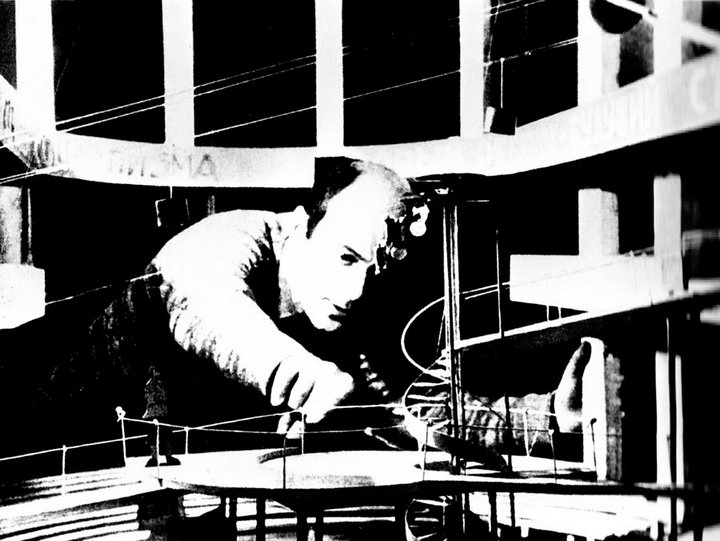 In 1923–1925 El Lissitzky proposed and developed the idea of horizontal skyscrapers (Wolkenbügel, "cloud-irons"). A series of eight such structures was intended to mark the major intersections of the Boulevard Ring in Moscow. Each Wolkenbügel was a flat three-story, 180-meter-wide L-shaped slab raised 50 meters above street level. It rested on three pylons (10×16×50 meters each), placed on three different street corners. One pylon extended underground, doubling as the staircase into a proposed subway station; two others provided shelter for ground-level tram stations. 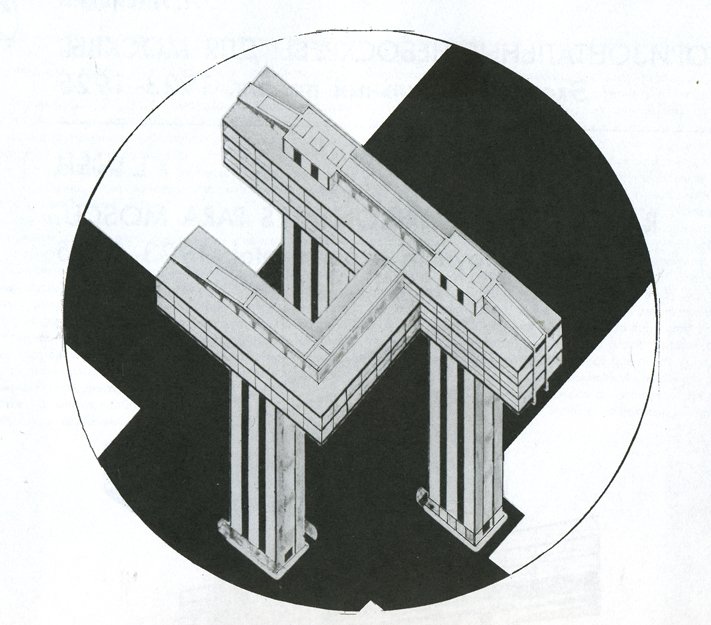 Lissitzky argued that as long as humans cannot fly, moving horizontally is natural and moving vertically is not. Thus, where there is not sufficient land for construction, a new plane created in the air at medium altitude should be preferred to an American-style tower. These buildings, according to Lissitzky, also provided superior insulation and ventilation for their inhabitants. The technical part of the concept (calculations, etc.) was executed by Emil Root, a Swiss construction engineer.

Lissitzky wrote: "We live in the cities born long before us. Cities unfit for the rhythm and needs of today. We cannot shave them off and build from scrap in a day. It is impossible to change their type and structure at once. Moscow belongs to Medieval concentric type, like Paris and Vienna. Its structure is: Kremlin in the centre, two transport rings and radial streets. The critical points are the crossings between main radial streets and circular boulevards. Here the squares have grown and they need development. And development cannot affect the traffic which is especially dense in these points. Here is the place for central [state] offices. Here the idea of my proposal was born. " (ASNOVA News, Moscow, 1926. p. 2 - 3). 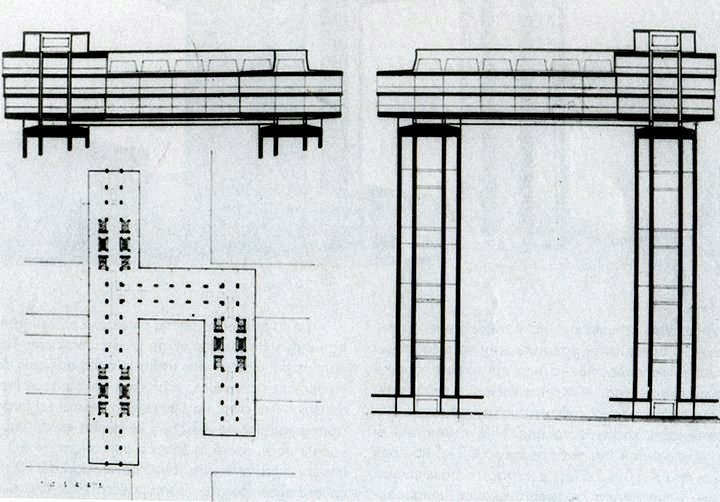 Lissitzky, aware of severe mismatch between his ideas and the existing urban landscape, experimented with different configurations of the horizontal surface and height-to-width ratios so that the structure appeared balanced visually ("spatial balance is in the contrast of vertical and horizontal tensions"). The raised platform was shaped in a way that each of its four facets looked distinctly different. 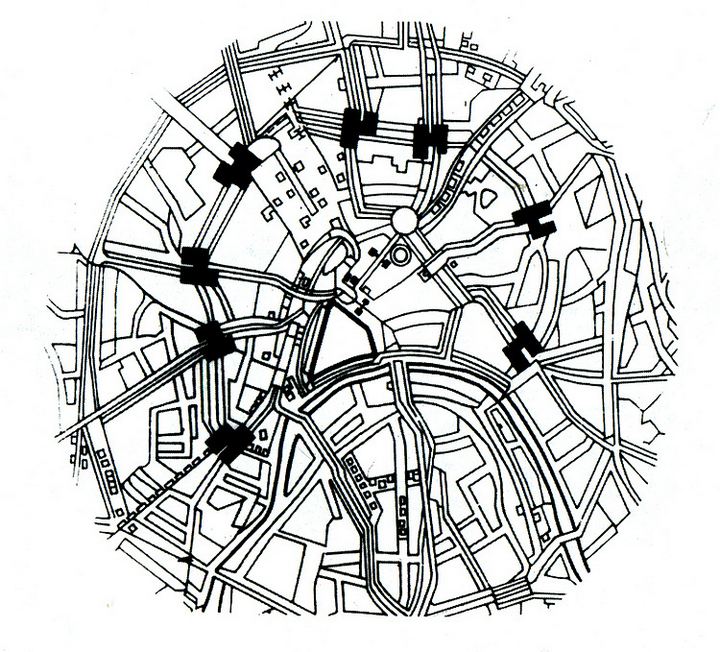 Eight horizontal skyscrapers on the map of Moscow.

In 1940s, eight "real" skyscrapers were planned (and seven built) for the Communist capital. A coincidence? But their location is different.

Each tower faced the Kremlin with the same facet, providing a pointing arrow to pedestrians on the streets. All eight buildings were planned identically, so Lissitzky proposed color-coding them for easier orientation. An illustration of the concept appeared on the front cover of Adolf Behne's book Der Moderne Zweckbau, and articles on it written by El Lissitzky appeared in the Moscow-based architectural review ASNOVA News (journal of ASNOVA, the Association of New Architects) and in the German art journal Das Kunstblatt. Another photocollage: Horizontal skyscraper at Pushkinskaya (f. Strastnaya) Square as it should look now

After some time of creating "paper architecture" projects such as the Wolkenbügels he was hired to design an actual building in Moscow. Located at 17, 1st Samotechny Lane, it is Lissitzky's sole tangible work of architecture. It was commissioned in 1932 by Zhurgaz (Magazines and Newspapers Association) to be used as a print shop. 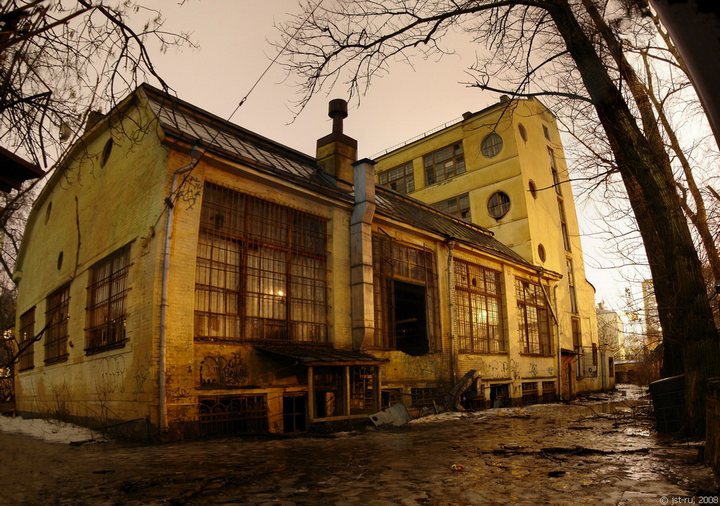 In June 2007 the independent Russky Avangard foundation filed a request to list the building on the heritage register. In September 2007 the City Heritage commission  approved the request and passed it to the city government for a final approval, which did not happen. In October 2008, the abandoned building was badly damaged by fire.

Other Lissitzky's architectural designs remained on paper, like this "Lenin's Tribune": 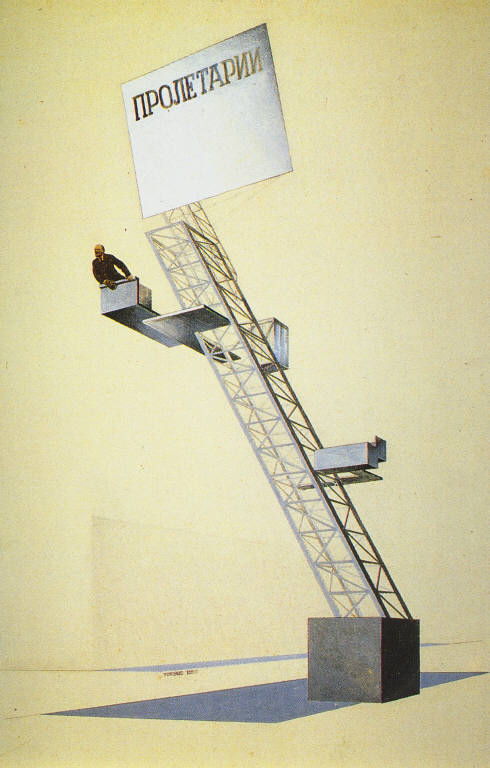 His horizontal concept was finally implemented decades after its presentation. In 1974, a building for Minavtodor (Highway Construction and Management Ministry) was built in Tbilisi, Georgia, designed by Georgiy Chakhava: 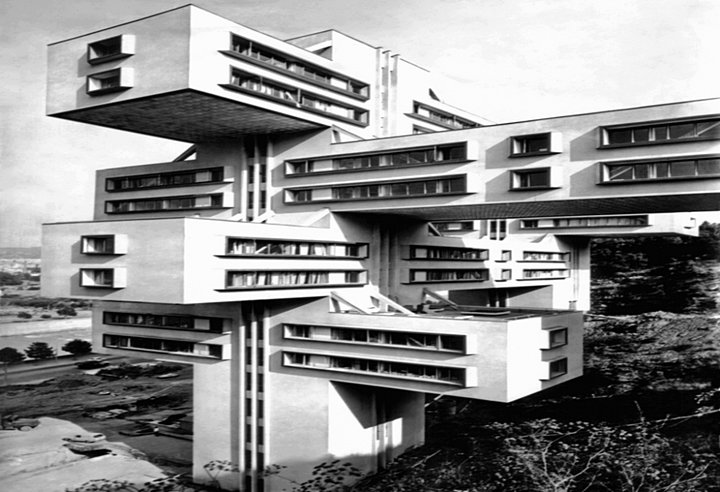 Another office building - the Unilever Best Foods HQ, modest but functional, is in Rotterdam, Netherlands. Designed by JHK Architects. Thanks to Philip for identifying it! 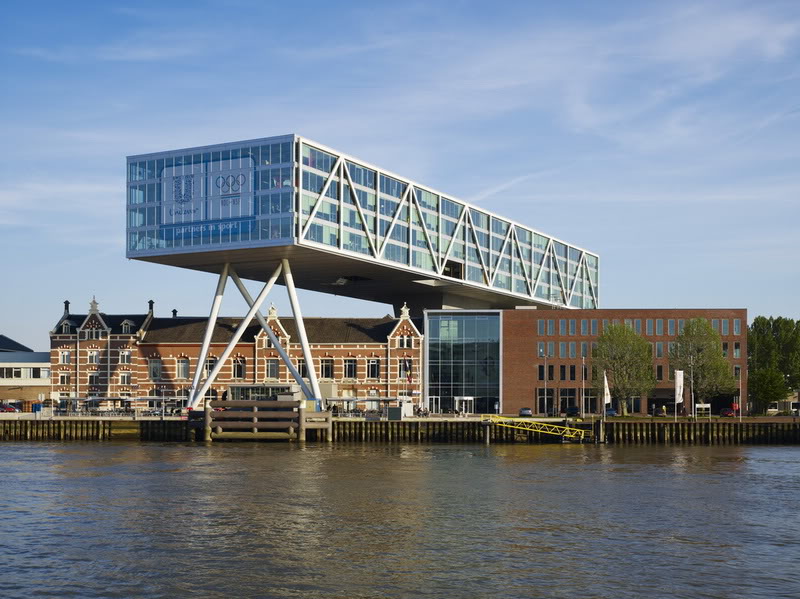 And last year, the Vanke Center was opened in Shenzhen, China, designed by Steven Hall. It's a true horizontal skyscraper, its length equals the heighth of the Empire State Building: 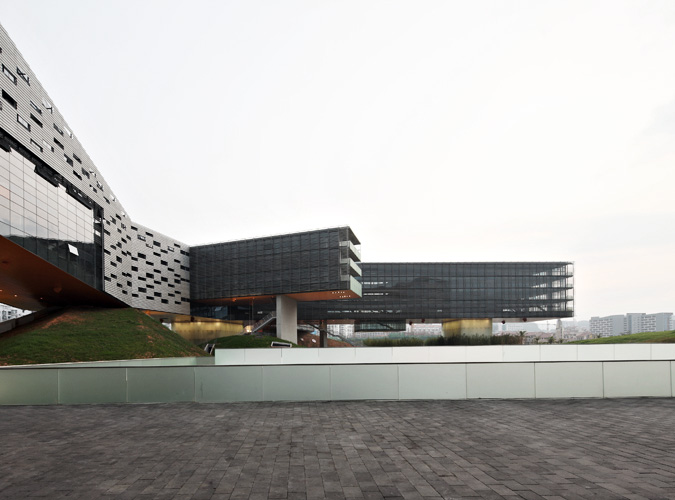 Excellent post, lord_k, as always. But they looks to modern and not such... elaborate (if it is equal to "вычурный") to refer them to diesel era (except "Lenin's tribune", of course), ask me.

Anyway, i can not stop thinking about tetris =)

Comment by Wels on April 26, 2011 at 10:23am
I thought I saw something familiar.. I've come past the Unilever building a great number of times.